Origins of navigation in the Mediterranean Sea seem to be in the birth of the humanization process of the Mediterranean Basin, where ports and colonies or cities were strongly linked and supported this process.

Economy and competitiveness were in the origins of this littoral urbanization, since economy cannot be historically understood, without since competitive spirit. The contemporary vision of this phenomenon includes other parallel concepts, like territorial branding and territorial marketing but they keep the essences of the first times. Fights between Genoa and Venice on Cypriot lands can only be understood from the economic perspective. Territorial controls and urban shapes were related to these facts (Fig. 1-2).

Nowadays, cities need to position themselves competitively within a global scale. These facts imply a double vision of the problem: On the one hand many global cities and towns have experienced unprecedented economic, social, and spatial structural changes. On the other side, these processes are accompanied by an ever growing importance process of branding in territorial and urban expansions.

Image/reputation of the cities, as well as their perceptions from the outset, is a concept strongly linked to the examination of branding. Port cities, and more specifically the urban waterfronts of the cities, are not alien to these phenomena.

The urbanization of the Mediterranean coasts started with strong links with the new colonies and ports founded by the first navigators, in a strong relationship between them. The most important ports knew an entire dependence of the respective cities during the middle ages. Later on port and cities developed for so many years an ambiguous relation where the strong initial connection was smoothly and progressively abandoned. The creation of the port authorities during the 19th and 20th centuries consummated this separation. In any case the port-cities relations can be observed basically from two different perspectives:

The previous analysis of a certain number of case studies let us to refer some common topics, with the background of competitiveness, either internal, between port and its city, or external among the other case studies.

From an urban perspective

From a port perspective

From a double common perspective

In fact, the weaker economic importance of the respective ports, the shorter separation between ports and cities shapes.

The double speed of the process as a challenge

Eastern Mediterranean port cities have known diverse phases in its historical evolution. This basin has been the scenario of all the imaginable cultural crossroads, together with the economic fluxes produced through both senses, either from the East or from the West.

We are witnessing nowadays the existence of two speeds in the way of managing the port structures. The containerization of the cargo activities implied a last transformation of the ports, through the automatization of the processes, the hyperactivity in the ports and a high competitiveness among these ports. The high level of specialization of a group of ports on that implied a progressive distancing from conventional structures, both in terms of business volume and in the structuring of the port form.

In a parallel way, other ports knew the respective locks and cancellations of this kind of operations, due to the lack of adequate answers to the requirements from the clients. They were condemned to stay out of the great transshipments circuits, and acting only for local cargos with an important reduction of their respective territorial hinterlands. A new typology of ports irrupted in the scenario these are the arousal of specialized ports without an initial relation with any city in the context.

They can be considered as the way of feeling a new humanization of the coastline sprawl where the concept of the conventional binomial port-city has been abandoned. In the last decade at least five new ports have been created Tangier Med, Gioia Tauro, Marsaxlokk, New East Port Said and Damietta. These new ports were built without any apparent relation with the urbanization processes or a weak relation between port and urban shape. We can differentiate several options within this group of ports.

A first group could define an almost inexistent relation between the new port and the urban settlements next to them. Tangier Med and Gioia Tauro can be considered as samples within this first group.

Tangier Med-port is a clear example of the territorial transformation. This is a complex of two big terminals 40 km from the city of Tangier between it and the Gibraltar straight. In a clear competitiveness with Algeciras port, these terminals were built since 2009 with capacities of 8.2 million TEU in their 300 Ha for this function. It is well known the issue between MAERSK and Algeciras Port in 2010, due to the competition between this port and Tangier Med [1].

The formal relations between this complex and the city of Tangier are not visible and the urbanization levels are very weak, based on the pre-existence of the village of Ksar-es-Seghir. Both evolution processes seem to be independent (Fig. 3).

Territorial structure of Tangier-Med. (Source: on the basis of Google Earth, by the author)

Gioia Tauro can be considered a failure as a regenerator of the region, but a successful experience form a business point of view for the transshipments. The lack of an adequate intermodal system linking with the main European corridors for transportation avoided a major regional impact. This case study is a clear sample where port and the city run parallel paths and the formal relations are clearly minimized (Fig. 4). 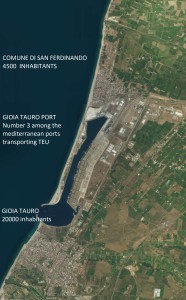 Territorial structure of Gioa Tauro. (Source: on the basis of Google Earth, by the author)

Marsaxlokk could be considered as an intermediate group, where an initial coexistence between the new port and the next village provoked in a second phase the urban expansion of the village with an important loss of urban identity. This village suffered an important change, from a fishermen village to a small urban shape as services provider.

Finally, both Egyptian samples (New East Port Said – and New Damietta) develop a parallel activity with the respective neighbor cities In the case of Damietta; the new city is named New Damietta. It is a recent foundation city, since 1980. Initially designed for a target of 500.000 inhabitants, its current population of 171.000 enjoys a high level of services, including two Universities, as the antithesis of the capital of the Governorate, Damietta. Damietta port and New Damietta borders are separated by 2.7 km of agricultural lands. This port was built in parallel to the new City since 1982 (Fig. 5). 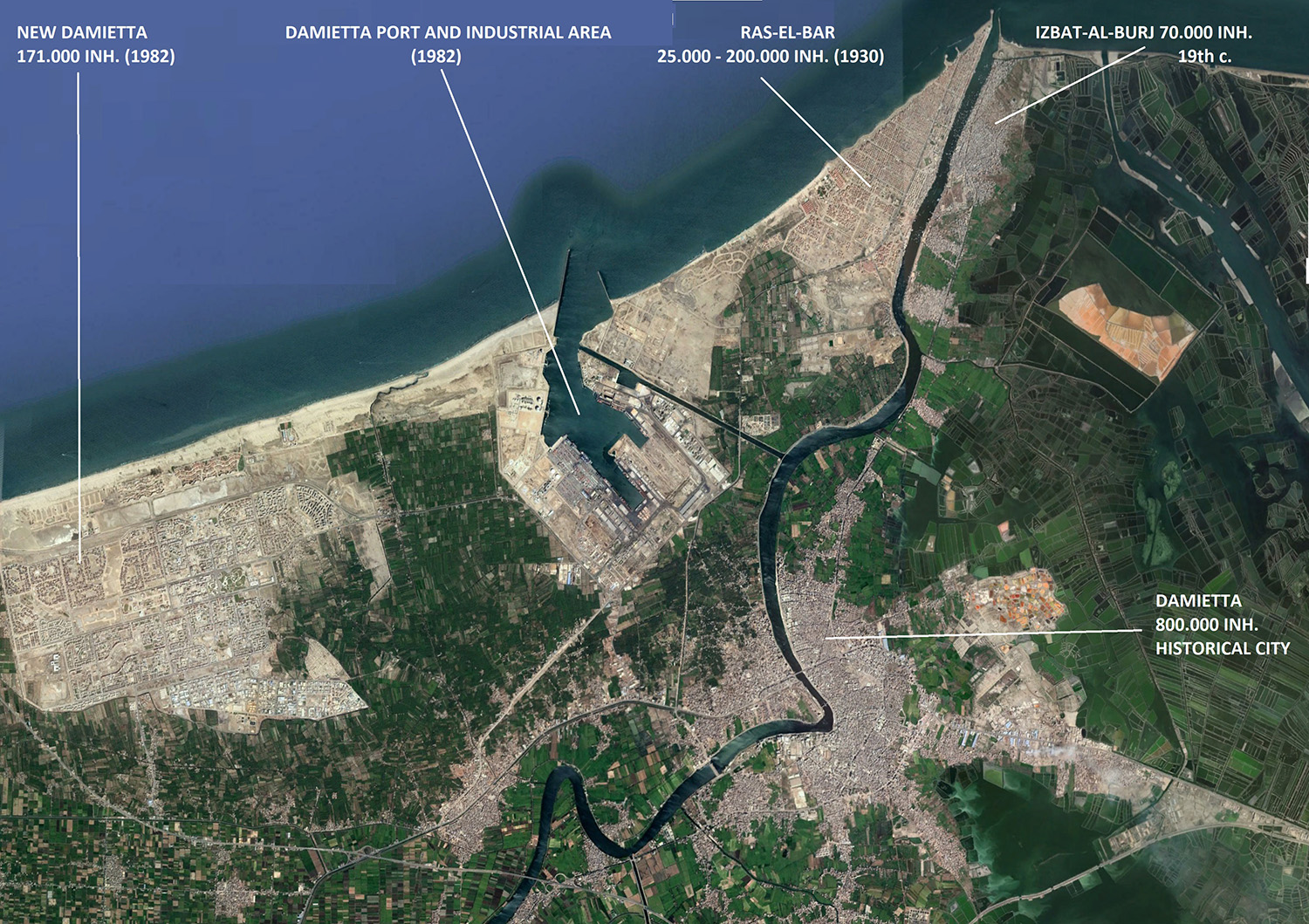 Territorial structure of New Damietta. (Source: on the basis of Google Earth, by the author)

New East Port Said City is a part of an integrated project around the new port terminal located on the new Suez Canal, including an Industrial zone, the own port and a new city with a final target of one million of inhabitants. New East Port Said is located on the northeastern entrance of the Eastern Suez Canal, which is a unique position for the convergence of three continents, the movement of world trade between East and West, and attraction for ships transiting the Suez Canal.

The integrative project is previewing the reinforcement of the regional infrastructures, as the complement for this important territorial transformation of the northern mouth of the Canal. Roads leading to East Port Said area are Arish – Qantara Road, Port Fouad Ferry, and Qantara – East Port Said – Road will implement the project (Fig. 6). 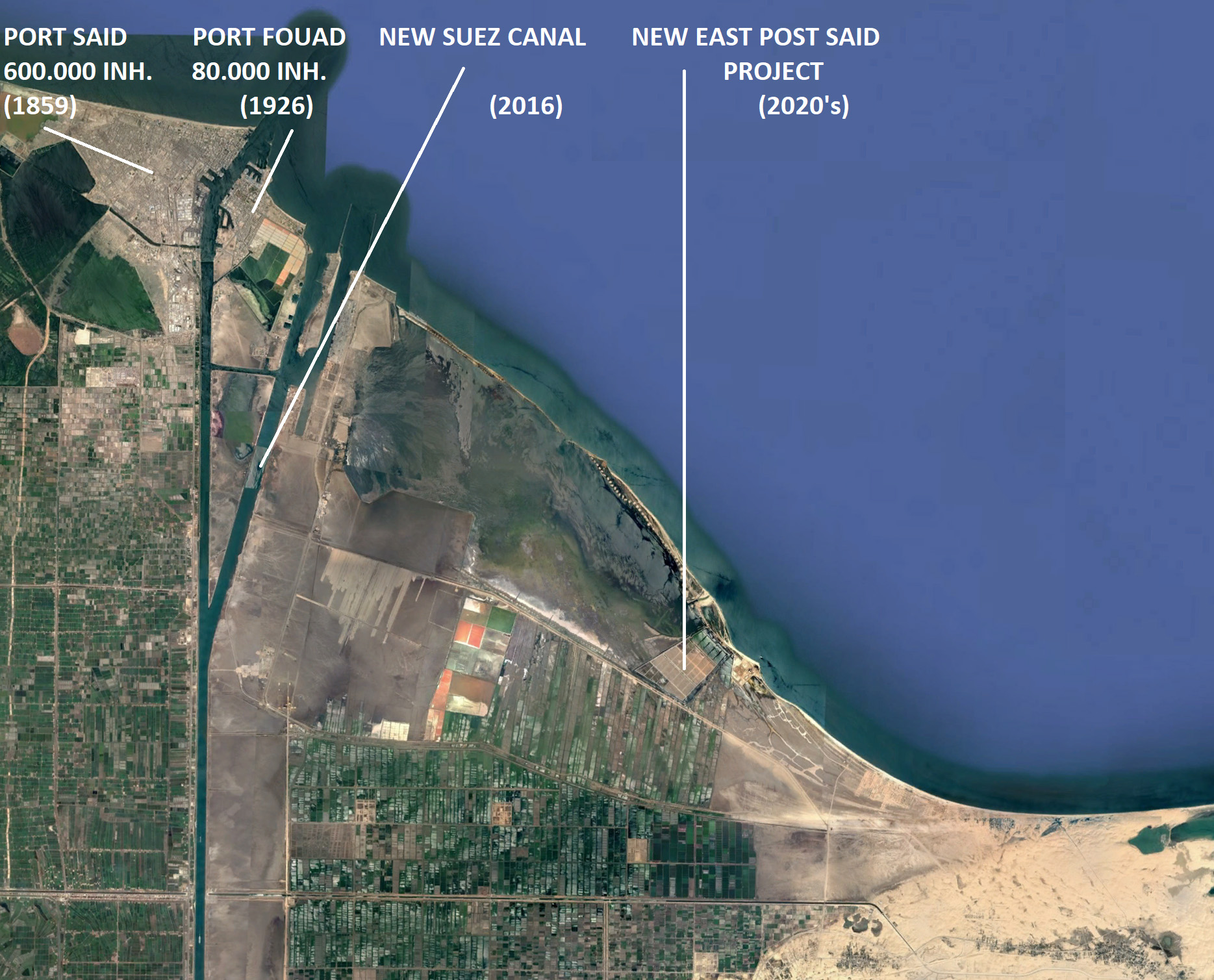 Territorial structure of Great Port Said. (Source: on the basis of Google Earth, by the author)

These processes run in parallel to a progressive littoralization of all the Mediterranean Basin. This process was almost completed in the northern regions; meanwhile southern regions know different levels of anthropization. Other phenomena, like gentrification and land privatization were brought up, as two factors are contributing for this littoralization.

Several economic sectors are involved in all the several processes. Their respective combinations have formalized a general territorial competitiveness with different perspectives, depending of the respective dominant sectors.

The different historic steps of the Mediterranean Culture presented always the existence of two speeds for their respective implementations. Both banks of Mare Nostrum were usually reflecting correlative processes, where one part was subordinated to the other one in a continuous alternation.

Humanization process of Mediterranean Basin is not finished yet. The spread northern territories are serving as references for the progressive littoralization of the south and eastern banks, which could provoke a negative effect.

The binomial Port-City seems to be created nowadays in the opposite way was previously developed. New ports could provoke in most of cases the appearance of new cities. It is an excellent opportunity to apply territorial and urban principles of resilience and smart.

Involvement of the citizenship in these processes is one of the problems to be resolved, since citizens cannot be considered as recipients of its interventions but as partners deciding the type of city they want to live in when designing, implementing, and evaluating related projects. This ideal scenario is far from its achievement in this south bank, according to the development of the respective processes.

[1] In 2010, the multinational and leader in maritime traffic Maersk Line threatened to move around half a million containers per year from the main Spanish container port, Algeciras, to Tanger-Med (Morocco) due to the most advantageous conditions. Specifically, the company referred to a reduction of 20% in the final cost of a container if they opted for the African port. This meant a loss of around 35 million euros per year for the Spanish port. Therefore, the port of Algeciras could begin to lose its supremacy in container traffic in the Mediterranean.

[2] New Damietta was designed by NUCA as one of the new settlements proposed to decongest such areas of Nile Delta, in a position very close the port of Damietta, in 1980. This proximity favored the relation between the 15000 employees related to the port and their respective residences.

Salem, I. and El-Sakty, S. (2014) Port selection criteria and its impact on port competitiveness in International Journal of Humanities and Social Sciences (IJHSS)Vol. 3, Issue 6, Nov 2014, 29-36.

Salem, I. and El-Sakty, S. (2014) Port selection criteria and its impact on port competitiveness in International Journal of Humanities and Social Sciences (IJHSS)Vol. 3, Issue 6, Nov 2014, 29-36.

Origins of navigation in the Mediterranean Sea seem to be from the Eastern side of Mare Nostrum. The urbanization of the Mediterranean coasts was linked to the new colonies and ports founded by the first navigators, in a strong relationship between them. In a second step port and cities developed for so many years an ambiguous relation where the strong initial connection was smoothly and progressively abandoned. Two main topics were the basis of this relation: the economic and the urban formal perspectives. A huge number of difficulties arose during these processes. Their different reasons are synthetized below: competitiveness in the management of common or interrelated spaces, which translates into conflicting management practices; the growing demand from the cities for a transformation of the urban seafront for the search of their own markets; the preservation of obsolete industries from both sides in need of transformation. In fact, the weaker importance of the respective ports, the deeper separation between ports and cities. The progressive separation can be observed today from several viewpoints. The radical change of the concept of the port businesses, obliging some of them to change their main economic goals. Port became services providers with a diversification of risks. The concentration of the economic resources over the main ports, in a direct relation to the important investments for the respective upgrades. The arousal of the new niche markets with the important irruption of the cruisers. The transformation of the land port properties into a one more opportunity for the business, since their locations and preferential conditions attracted so many urban investors. This article will try to develop some of these ideas and analyze their eventual consequences in the Eastern Mediterranean scenarios.