In the port organizations of the Republic of Argentina there is historical documentation of great value that needs to be identified for its enhancement and conservation, using the most advanced digital technologies for preservation, organization and consultation. This has been expressed by researchers and specialists in a series of colloquiums and conferences held since 2014.

In view of the complexity of the challenge, the available economic resources and the considerable physical distances that separate the country’s main port cities (especially overseas, maritime and river cities), those professionals decided to work in a network using computer supports, inviting scholars from different disciplines and actors of the port community. The main interest was to access, rescue, learn about, and disseminate the existence of this cultural heritage whose documentation arose as necessary for various approaches to the historical and present dynamics of ports and their relationship with the development of cities and regions.

This is how the Regional Port Cities Nucleus was constituted, within the framework of the Institute of Economic, Social and International Studies (IDEHESI) dependent on the National Council of Scientific and Technical Research of the Argentine Republic (CONICET), (hereinafter CPR Nucleus), with a marked transdisciplinary and interistitutional profile, dialoguing and cooperating with port managers [1].

It was set by Rosario, and this was no accident. The city is located in the center of one of the most important port complexes of the Mercosur countries, -on the Paraná River, in the fluvial axis of the Silver Basin-, through which 80% of Argentina’s cereal production is exported. From its origins as a ferroportuaria city in the XIX century, it was distinguished for facilitating the articulation of regional and interprovincial policies, in diverse dimensions, especially in the cultural, social, and economic ones [2].

Aerial view of the port and city of Rosario, on the Paraná River. Sector of the Bulk Terminal of the port. Year 2012. Photograph courtesy of María Andrea Babsia.

Currently, the CPR Nucleus brings together more than fifty professionals (mostly teachers and researchers from public and private universities) from Argentina, but also from Brazil, Chile and France.

It began by testing collaboration strategies in this sense with scholars and authorities of the public ports of Santa Fe (with the sponsorship and collaboration of the then Directorate of Ports of that province), with colleagues from other cities in the country, and with those abroad already had the technical experience required for the digitization of such documentation, and the creation of virtual environments capable of recreating the port past.

The Ente Administrador del Puerto de Rosario (ENAPRO), created 25 years ago by the Ley Nacional de Puertos (National Ports Law), which created the provincialization of national terminals and entrusted their administration to autonomous management entities (a desire pursued by the people of Rosario since the 19th century), became a bridge between the sectors involved in port operations, the representatives of the region’s economic and productive interests and culture [3].

ENAPRO opened its doors to the CPR Nucleus and from there began various joint actions in favor of the port-city integration. Documentary collections from the 20th century were located and a room was set aside for their conservation. Researchers of the Nucleus carried out a preliminary digitization of rescue and cataloguing. 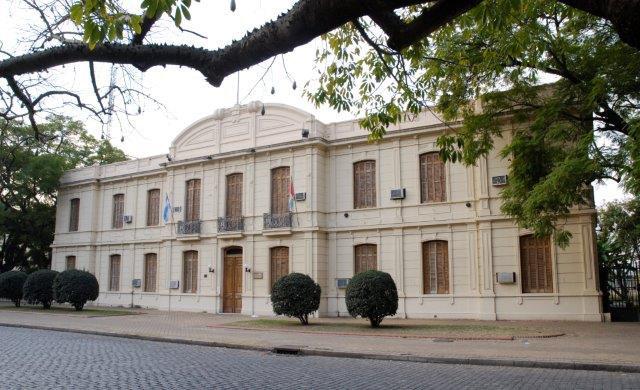 Building where the Administrator Entity of the Port of Rosario has its headquarters. ENAPRO Press Photography.

The results of these experiences were shared at the Meeting of the Argentine Port Community in the city of Buenos Aires, in 2018, with the presence of national and provincial authorities of the area, heads of public and private port entities, and the most diverse actors involved in the operation. On that occasion, the proposal “To know ourselves is to integrate. Identity and Historical Heritage of Argentine Port Cities”, understanding heritage as a key factor in identity, integration (inside and outside the port community) and national development.

At the same time as ENAPRO was created, the transfer of port facilities to areas far from the central zone took place in Rosario -as in other cities of the world-, giving rise to a process of urbanistic reforms and the transfer of port and national railway lands to the province and the Municipality. In what were storage sheds, maneuvering playons and imposing silos, parks, walks, cultural centers, gastronomic proposals, etc. were created that in a very short time modified “the image of the city”, and the recreational practices of the inhabitants, becoming, in addition, a motive of tourist attraction.

However, the port landscape that dominated the city until the 90’s of the twentieth century was displaced by another that lacks a historical script that allows to value integrally and in its right dimension what was a feverish logistic area, source of work, for a very wide hinterland that surpassed the limits of the Argentine Republic.

Neither does it have a museological and archival space capable of physically housing, in appropriate conditions, valuable maps, files and existing port bibliography. We are aware of the concern of the authorities in this regard and invited by them we participate in meetings tending to dialogue on projects that are in the Secretariat of Planning of the Municipality. 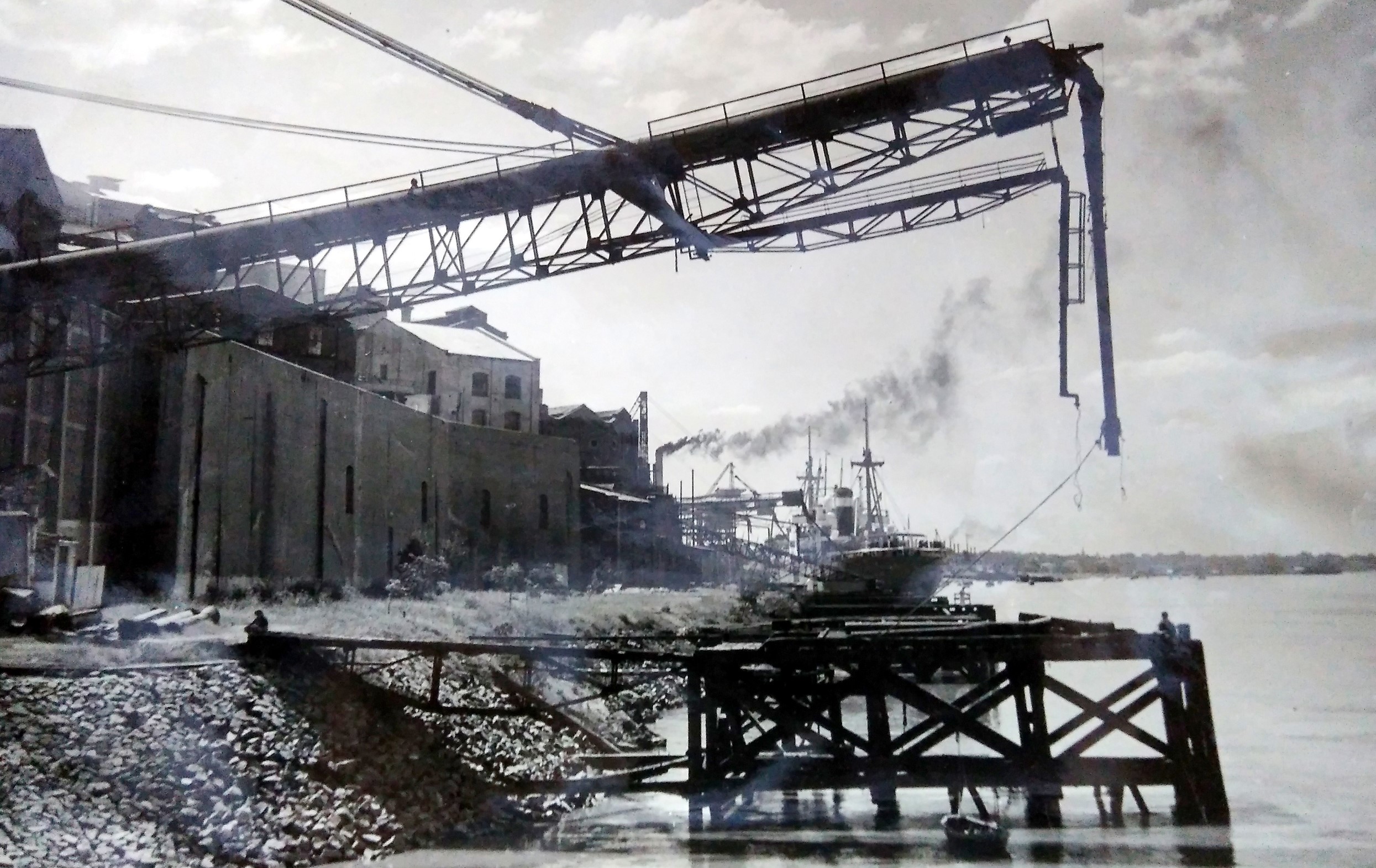 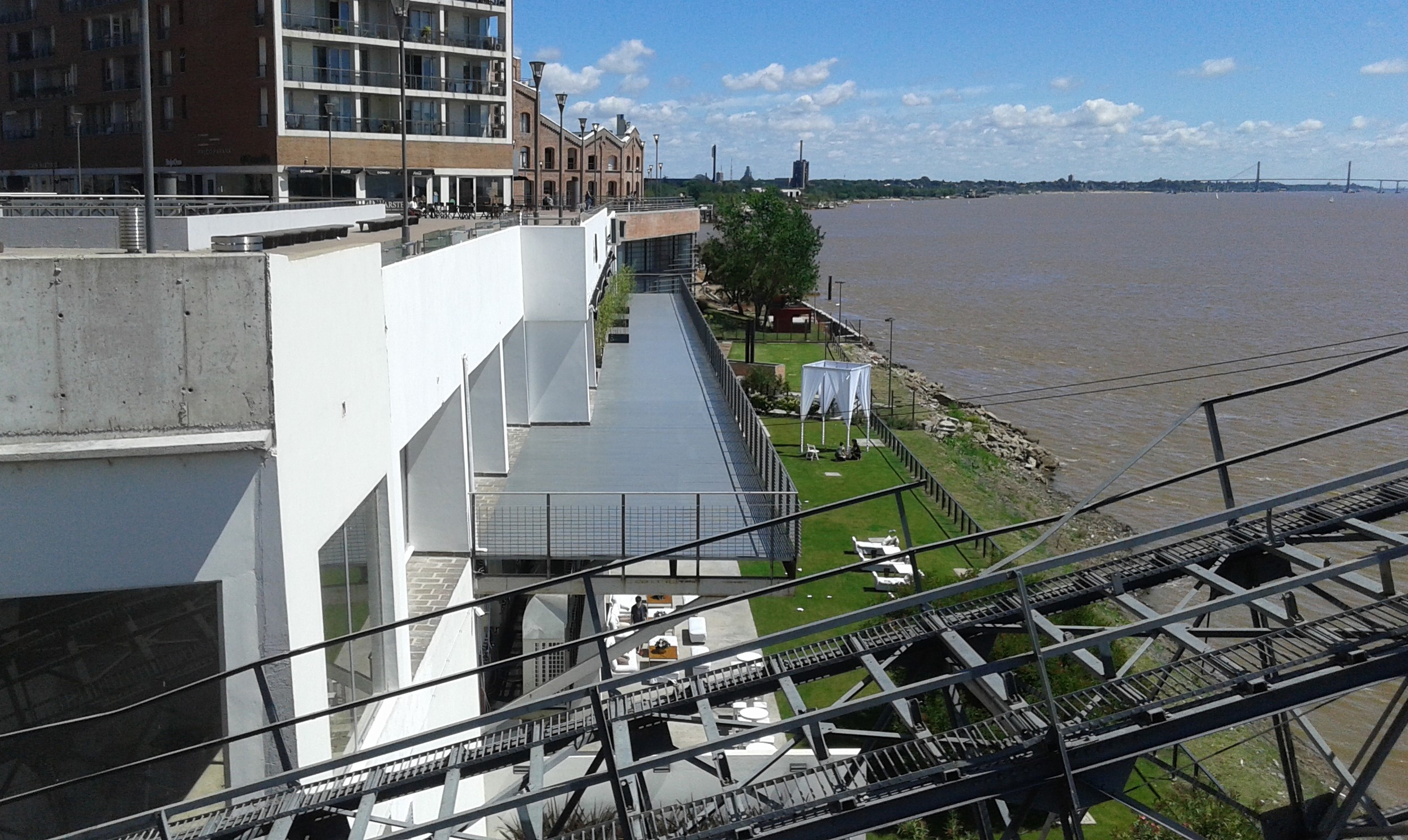 Sector of the denominated “North Port” of Rosario, “before and after”. The first photograph corresponds to the year 1950, courtesy of Archivo Diario La Capital de Rosario. The second, the same sector at present, converted into a convention center. Photograph of the author.

The members of the CPR Nucleus, in their respective port cities, carried out their own survey corroborating the magnitude and transcendence of the documentary collections, works of art, and diverse traces of the past existing in the interior of the entities, port consortiums, the General Administration of Ports, and the National Direction of Port Constructions and Navigable Ways, that await their cataloguing and digitalization.

In 2010, the European Ports Organization approved a “Code of good practices for the social integration” of ports, stating that “The experience of the port begins in the city”, with the creation of centers dedicated specifically to reflect on ports, or through cultural institutions such as museums or exhibition spaces, and from there could attract visitors to the port [4].

Universities, academies, research and training institutes, museums, archives, libraries, networks and cultural centres together with the various actors of the port community, with the powerful competition of the specialised press, journalistic media and social networks, are therefore called to a long-term task: the reunion of citizens with their port identity from which to reflect and cooperate for a sustainable port-city-region development.

In order to be able to contribute with innovative tools capable of articulating the actors in such a task, the experience of one of the most active international centers in digital humanities has been used: The François Viète Center of Epistemology and History of Science and Technology, created at the University of Nantes, France, in 1994, through the resident team at the University of Western Brittany in the city of Brest (CFV-UBO).

For the last four years, the members of the “Gaulish” team together with the CPR Nucleus have been working, among other aspects, on the creation of a common technological platform for documentation and archives on port heritage based on the semantic web and an ontology resulting from the ANY-ARTEFACT model (Laubé-Rohou) extended to the development of the city-port relationship in the human and social sciences to ensure interoperability with other existing digital libraries [5].

In addition, interactive virtual recreations have begun to be experimented, taking for example the operation of machinery used for the construction of ships and that can be extended to other industrial products. In addition, a decision-making guide is drawn up for parties interested in heritage management that can contribute to the decision-making of the agents of port areas for the management of their heritage and its valorisation from a socio-economic point of view (communications, town planning, housing, tourism, infrastructure works, environmental impact, cultural promotion, technology applied to development, etc.) [6].

The Argentine proposal is to understand the ports in their urban and regional dimension, as computers and generators of identity and development and therefore require an episteme that contemplates the paradigm of complexity, since the port, urban and regional spaces are each in itself, complex social structures that condition their evolution and which in turn are modified by political-ideological and socio-economic transfers and by the cultural circulation that takes place in the historical future [7]. Its knowledge cannot be reached from a disciplinary constraint, but through interdisciplinary approaches that consider “border zones” or “intersections” between disciplinary fields.

In this way, the CPR Nucleus opens up a theoretical flow that transversally links contributions framed in naval, maritime, fluvial, port, technological, economic, political, social, cultural, urbanistic, logistic, anthropological, archaeological, museological and international relations issues, among others, and that with a computer ontology can provide results through interfaces and descriptors.

On the other hand, the French researchers also consider the port space as a complex technological macrosystem and start from similar theoretical postulates coming from renowned port geographers of the last decades of the 20th century and the beginning of the 21st century, as well as from historians of science and technology (T.P. Hugues).

To advance in the application of these theoretical and methodological perspectives, -which the members of the teams of the two countries have studied and debated in the last years as a result of the joint work-, to the field of port studies involves proposing to overcome both simplifications and local approaches, mechanical, lacking in connectivity, which do not dialogue with the contributions of various disciplines.

In addition to generating scientific knowledge, the effect of reflection on the value of the preservation of port heritage and the actions taken to ensure it, the ANY-ARTEFACT ontological system seeks to collect, link and draw up a broad repertoire of institutional actors committed to the protection of all cultural goods and traces of human intervention in urban-port spaces and the convergence of the different sectors, all of whom share a common interest in the integrated development of regions and ports.

[7] Beatriz Figallo, Josefa García de Ceretto. The history of the present time. History and epistemology in complex territories. Department of History of the Faculty of Philosophy and Letters of the Argentine Catholic University, Buenos Aires, 2019.

The existing particularities of the historical documentary heritage in the Argentine Republic have motivated the development of a strategy of valorization, rescue and digitalization of the same, from a concern coming from the university scientific environment, and that has awakened the interest of the port authorities. The present article argues that the rescue of the past will contribute to the understanding of the historical and current dynamics of ports in their relationship with cities and regions, and that it will also favor the efforts to "build bridges of integration" inside and outside the port community, necessary to achieve governance for sustainable development. Finally, the actions carried out five years ago by a group of specialists from the country and abroad to cooperate, through innovative digital tools, in the presentation of effective proposals to the requirements of the Argentine case are recorded.