Three thirds of the Earth surface is covered by sea water, i.e. oceans and seas. Superficial fresh water accounts for a marginal portion of the estimate. Thus, the care of our rivers should be valued, in particular, the care of those rivers that are now used for international freight and passenger transportation, as is the case of the Rio de la Plata, among others, in South America, The river mouth of the Plata and its affluents or converging rivers, the Paraná and Uruguay, meet the ocean in El Plata Basin. Along these rivers, there are a significant number of ports and port terminals, where ships come and go from and to the Atlantic Ocean. A series of embankments and imposing electric dams have been built in this part of the world. To be navigable, the rivers of the world need to be dragged (disturbing the river bed) and artificial locks have been built to enable the passage of vessels. At global level, only a third of the rivers have not been affected by human activity and flow freely.

The Ports of South America and their history

Ports tend to be friendly to cities and to become, all of them, sustainable. The preservation of the port heritage is not always possible in younger countries, such as South American ones. This is why preservation is replaced by Museums of the History of Navigation, such as the Naval Museums of Montevideo, Uruguay, the house-museum Isla Negra, of the poet Pablo Neruda, near Valparaíso, Chile or the Benito Quinquela Martin Museum in la Boca, Buenos Aires. All these museums display pictures of the European immigration in Argentina, its trade or historical events or parts of vessels.

In addition, the ports or port entities organize in their own sites art exhibitions which stage virtual reconstructions and illustrate the navigational history of the area, for instance, the Museum of the Central Government Seat in Argentina, located behind “Casa Rosada”, which was built on the grounds occupied by the Fort of Buenos Aires in the early 18th century, and the Taylor Customs, which boasts bricks original of 1855. In the city of Rosario, Province of Santa Fe, the Rosario Port Administration Agency addresses these issues. 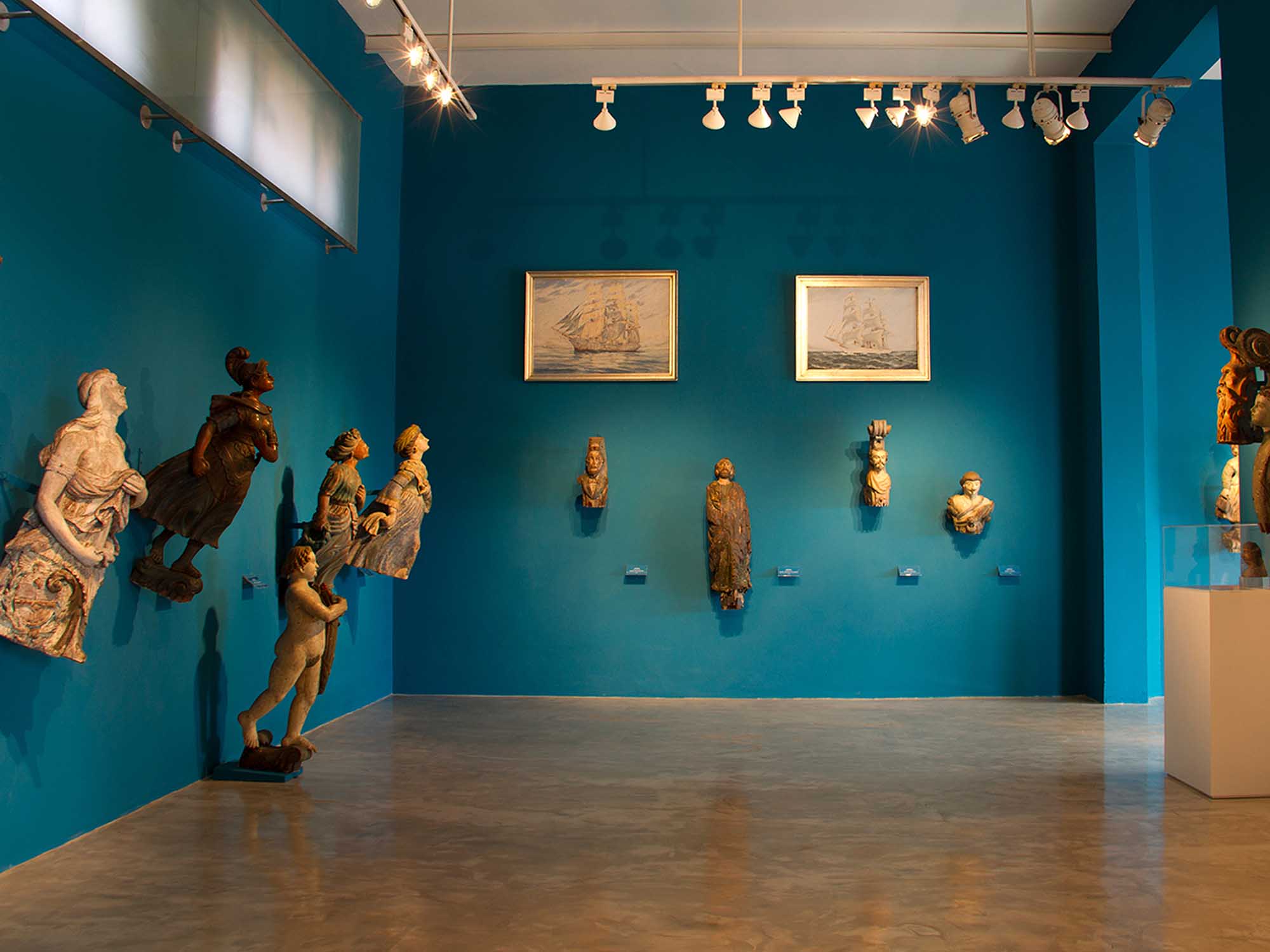 International Rivers and their Administration Committees

According to the Convention on the Law of the Sea of 1982 and subsequent treaties, International and Internationalized Rivers are those rivers where navigation is free and the general interest prevails over individual interests. Several “committees for the administration of shared rivers” have been generated along to supervise coexistence, based on a formula that consists in the establishment of international committees for the management of rivers, who, in turn, assist to the dialogue among countries in order to ensure governance. Their work is active and vital in the case of European rivers, which concentrate a significant amount of navigation. In South America, the most important ones are the Intergovernmental Coordinating Committee on La Plata Basin (CIC) and other committees such as the Administrative Committee on the Uruguay River (CARU), whose members are Argentina and Uruguay; the Administration Committee on the La Plata River (CARP); and the Intergovernmental Committee Parana- Parana Waterway (CIH), which comprises Argentina, Bolivia, Brazil, Paraguay and Uruguay.

Del Plata Basin. The second in Latin America and fifth in the World

Del Plata Basin is the region in South American drained by the La Plata River itself and its affluents, which flow into the Atlantic Ocean. Del Plata Hydrographic Basin covers an area of about 3,170,000 km², the second largest in South America and the Fifth in the world. The Basin spans the territories of five countries: Brazil, Bolivia, Paraguay, Argentina and Uruguay and is the main affluent system of the Guaraní aquifer, one of the main continental reserves of fresh water in the world. Ports and port terminals are located along all the geographical circuit.

The pertinent legislation is the “La Plata Basin Treaty” of the year 1969. Its main governing body is the meeting of foreign ministers, whose decisions must be unanimous.

The Intergovernmental Committee, CIC, is the Coordinator of the Basin’s Countries, based in Buenos Aires, which has had more presence since 2018. The Committee is devoted its efforts to the creation of an international observatory, which has also enabled the inclusion of issues related to the ports’ heritage, in addition to environmental ones.

The Parana Paraguay Waterway lies within the La Plata Basin system. From North to South, the Basin covers the area extending from the Brazilian city of Puerto Cáceres, in the state of Mato Grosso, Brazil, to the mouth of the Paraná River, opposite the port of Nueva Palmira, in the department of Colonia, Uruguay. The countries that share this river system are: Argentina, Bolivia, Brazil, Paraguay and Uruguay. These countries created the Intergovernmental Committee on the Waterway (CIH), through which they have entered into several agreements with international bodies.

The Waterway is geographically natural, is the longest in the world no locks have been build along it .However, it does need to be dragged in certain areas, up to 34 feet or 10 meters, in order to be able to receive large ships.

The identification duties have made it necessary to build 110 port facilities along the waterway, out of which 21 are state-run ports and 89 private port terminals. Eighty three percent of these facilities are located in Argentina and Paraguay.

In Argentina, more precisely, in the city of Rosario and the enhanced area of the Great Rosario, there are 26 port terminals, with soy bean, maize and other cereals poles. The Great Rosario is currently among the three-largest exporters of soy bean in the world, along with the U.S.A. and Brazil.

This is a strategic area because of its central location in the Paraná-Paraguay Basin and its proximity to the exit to the Atlantic Ocean through La Plata Basin. The port of Rosario is not really one port, but a series of port terminals. Thus, “Rosario Port” is the name given to a number of facilities, located on the Parana River, under the jurisdiction of the Rosario Port Administration Agency. The different port complexes lie along approximately 90 km on the right margin of the Parana river, from the town of Timbues, in the north, along approximately 45 km upstream of the city of Rosario, to the city of Constitución in the south, approximately 45 km downstream of the city of Rosario. In turn, the Port of Rosario Terminal, TPR, the only terminal located in the city of Rosario itself, its exploited by two companies, an Argentinean one and a Chilean one, and exports all kinds of goods. This is the Multi-purpose Terminal of the Province of Santa Fe. 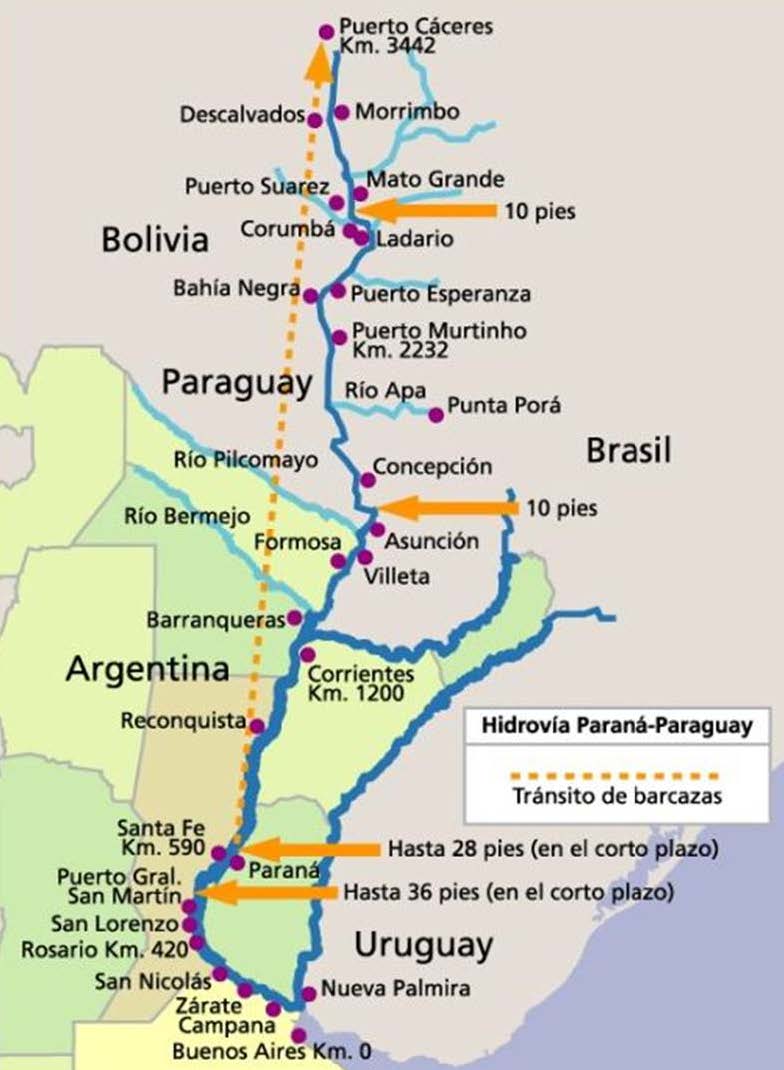 The map below shows the Paraná Paraguay Waterway. 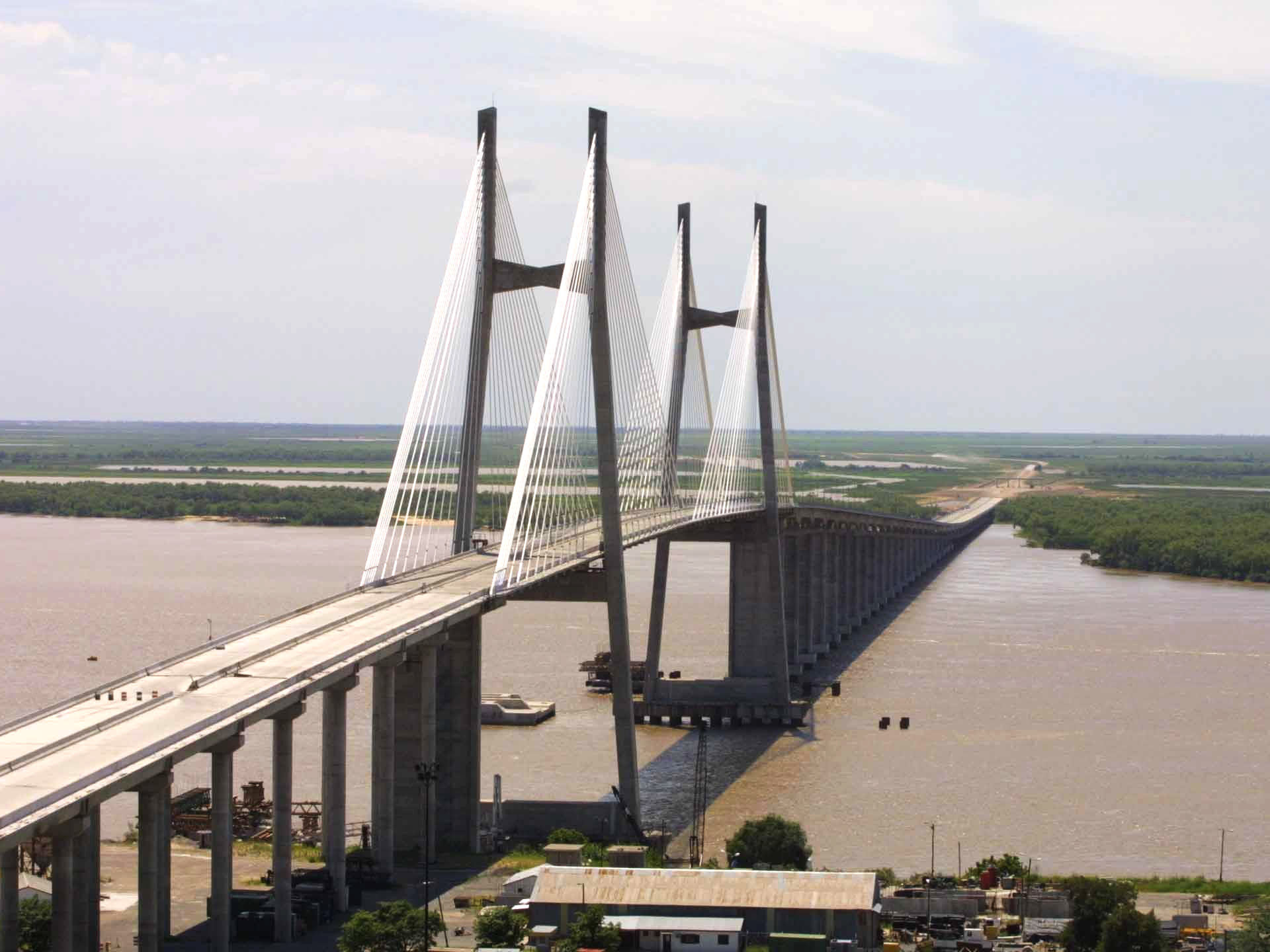 The Argentine Ports and the port terminals governed by the Provinces

In Argentina, the decentralization of the administration of the ports started with laws issued in 1992. First, the Argentine State regulated the “Administrative Reorganization and Privatization”, creating the “Ports and Navigable Waterways”, designated as the National Port Authority. This is the reason why rivers are administrated by the National Government.

Later on, in the same year, the national port model was defined, and the decentralization of the activity was advanced through the transfer of all ports to the provinces where they were located, with the exception of the port of the City of Buenos Aires. In turn, the provinces invited the private sector to participate through a national and international bidding process, which generated the so-called port terminals, which assumed all risks and responsibilities in exchange of a monetary compensations. The legislation on the preservation of the port heritage does not cover them yet.

As we have seen, the Province of Santa Fe delegated the administrations of the ports of the City of Rosario to a National Government Agency, the Rosario Port Administration Agency/ EN.A.P.RO, whose function is the administration, supervision and exploitation of the Port, and to maintain both its commercial purpose as its specific port activity and the public use of the port. In addition, the city has public beaches and a river port terminal used by tourist vessels touristic purposes and for vessels crossing the river towards the beaches of the province Entre Ríos.

This Provincial agency is headed by a president and a board of director comprised of representatives of all the sectors involved in the operations of the port and of the economic and productive sectors of the region.

At present, first virtual river-port cultural corridor is being developed through the port heritage and its digitalization, carried out in the collaboration with the Nucleus of Regional Port Cities, the Institute for Historical, Economic, Social and International Studies, IDEHESI-CONICET, based in Rosario and formed by Rosario and a number of other cities.

In addition, in Rosario we feature the Athenaeum for the Studies on Waterways and Sustainable Ports “AEHPS”, which has signed an agreement with the ENAPRO through the University of the Latin American Educational Center, UCEL. The Athenaeum collects data of the Paraná Paraguay Waterway and its ports, and studies the progress in port sustainability, the proper certifications and legislation. 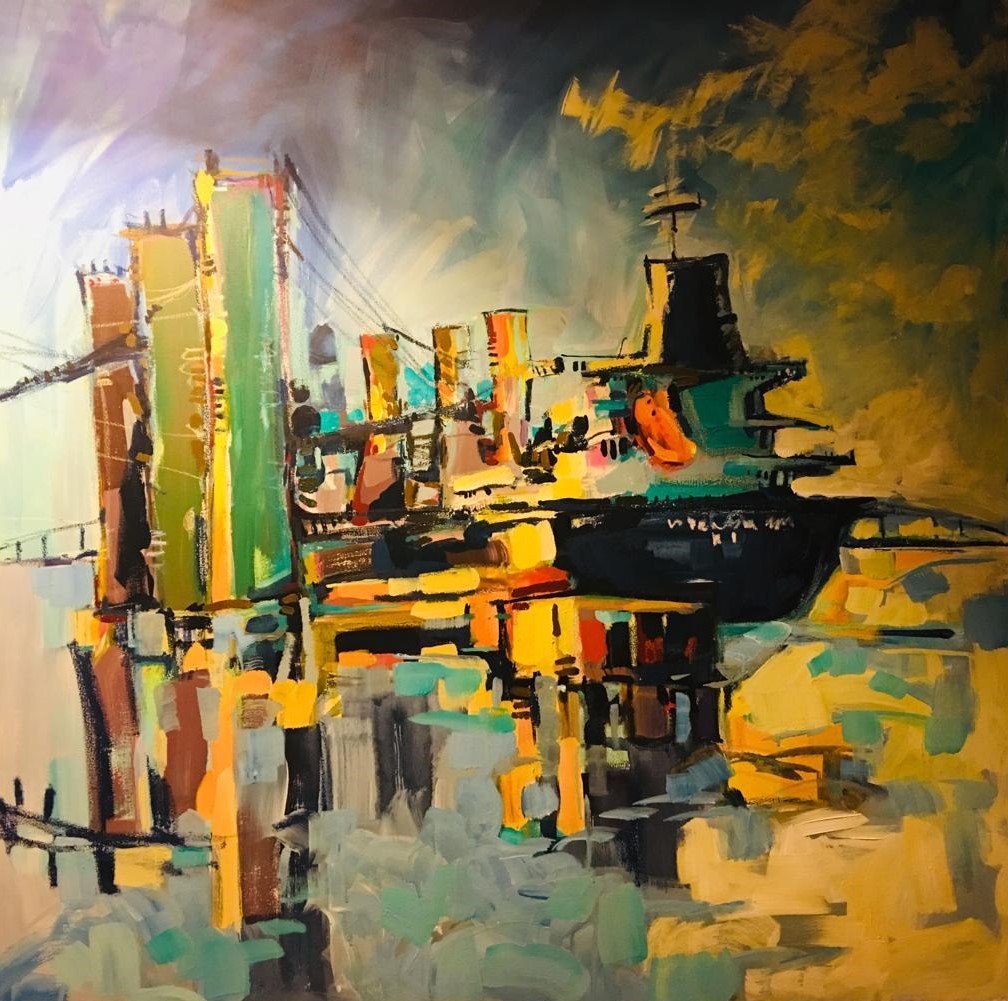 The measures adopted by the different port supervisory bodies of Argentina on the issue of the preservation of the historical heritage have not been homogeneous. Legislation should be forceful. The lack of homogeneity may be related to the fact that some of the ports and port terminal are relatively new: some of them are no more than 10 years old. The problem exists in several countries of Latin America, but progress is being made with the help of universities and entities that study the port sector, among them also, the IDR Regional Development Institute.

U.N. Convention on the law of the Sea.

[Helsinki Rules on the Uses of the Waters of International Rivers]

Head Image:  “Port facilities of Puerto Rosario on the river”

There are still several aspects that pose a challenge to the preservation of the port heritage in our country, Argentina, in particular, the different criteria arising from the institutional evolution of the system throughout history. Therefore, it has not been possible to unify the criteria on several issues -not only those related to the heritage- because, as it happens in many parts of the world, Argentine’s port legislation reserves the waterways for the National State, which, in the year 1992, delegated the administration and development of the ports to the provinces. The only exception is the port of Buenos Aires, which belongs to the National State. As a result, several provinces with ports under their jurisdiction granted, through public bids, the concession of the administration and development of the ports to private operators. This is the case of the Rosario area, where its old ports, in many cases, have been relocated from their original site. In this context, the issue of the preservation of the cultural heritage calls for the dialogue between experts and the governance bodies of rivers, i.e., administration committees, the national or provincial government entities, which supervise ports, the different public and private spheres.