The port of Naples – now merged into the Port Authority with ports of Salerno and Castellamare di Stabia – represents such a significant reality for the Metropolitan City of Naples to connote the identity of the whole territory. Besides the port’s corporate scope, in terms of size, therefore in terms of turnover and employment, it represents a huge resource for the city and has a very high identity for those who live there.

Moreover, the presence of the sea is a very conditioning factor for the organization and life of cities, always configuring a resource to be exploited and managed.

The added value produced by the port’s presence in the city is shown below.

From a nautical boating point of view the Port of Naples – with the three landings Molosiglio, Nisida, Mergellina and the Molo Luise – contributes to make Campania the second region after Liguria and before Tuscany for the number of berths, thanks also to the strengthening implemented in the 2000s. In particular, between 2001 and 2008 there was a regional program for the integration of ports and landings which, with around 70 interventions, using European structural funds and public and private partnership method, created a network system, increasing of over 5,000 berths in the whole region.

We believe that boating still represents a great potential; this opportunity should be seized with an essential development to enhance the coastal cities. Suffice it to say that, in 2017, the direct expenditure related to the movement of large yachts in the Gulf of Naples and the Amalfi Coast was estimated at over 30 million euros. Therefore the presence of such larger boats must be ridden and enhanced.

From the point of view of shipbuilding, the Port of Naples, together with that of Castellamare di Stabia, with over 1,500 employees (2,000 in related sectors), has a great representation of ship-building companies, with a long tradition of professionalism.

And last but not least, from an infrastructural point of view, the Port of Naples is part of a wider system, which embracing also the Capodichino Airport and the Nola Interport and makes Campania a strategic hub for goods and services.

With regard to the infrastructural enhancement of the port, it is necessary, first of all, to make it more competitive with the other italian ports, given that, according to the Assoporti ranking, the Port of Naples is not on the podium about cargo – handling, in terms of TEUS, despite its unique and privileged position in the Mediterranean sea. A sign therefore that we need to implement structures and services.

This also applies to the cruise industry, in which Naples has become an increasingly rising call with regard to the number of passengers, the third after Civitavecchia and Venice.

About the passenger traffic, despite the more or less constant increases in recent years, reception, security and tourist support services remain the bad news, still lacking and not competitive. The tourist flows increase is still too spontaneous, not sufficiently governed and oriented towards the full enjoyment of the beauties of the City of Naples, which boasts a UNESCO World Heritage Center which constitutes a rich heritage of artistic, architectural, civil and spiritual history, formed over seventeen centuries. Leaving aside the rest of the monumental and landscape heritage.

Against this backdrop, I’d like to highlight the interest of the builders whom, beyond the social and economic general interest, also look to the Port as a client for important works and interventions.

In the last decade, the Port Authority has suffered an uncertain and inefficient governance. The Authority, reformed administratively by the law of optimization of the port calls of the whole country, has been experiencing for a couple of years a new season of positivity, which is sprinkling the activity of old (extremely) and new initiatives, aimed both at the strengthening of the infrastructure and the enhancement of the city-port integration, which is physically an unquestionable unicum.

The Port of Naples is interested, by the way, in a European funding program – the so-called “Grande Progetto Logistica e Porti – Sistema integrato portuale di Napoli” – originally funded by FESR Regione Campania 2007-2013 and FESR 2014-2020. These European structural funds respond precisely, in their highest ambition, to the goal of recovery of cohesion and competitiveness in regional territories which, due to many factors, are out of the national economic development and compared to others european countries.

“Grande Progetto Logistica e Porti – Sistema integrato portuale di Napoli” includes works apt to eliminate the constraints that reduce the potential of the neapolitan port and to improve connections with internal areas; it is producing tenders and works with the satisfaction of companies and citizens.

It is aimed at the arrangement and structural safety of some existing infrastructures in the port area of Naples.

For example, the intervention on Darsena di Levante is already financed with other funds and the resulting materials from the excavation of the seabed of the Port of Naples will be use for that project. Furthermore, the same Darsena will be connected to the western part of the port with a road link, which provides for the reorganization of existing roads; in addition it will be connected with a railway line, which will allow a significant reduction in traffic.

All the planned measures will have a huge impact on the livability and economic competitiveness of the port.

The renovation of the Molo San Vincenzo and the Darsena Acton, which have enormous potential, especially for tourism, will be two of the biggest challenges. 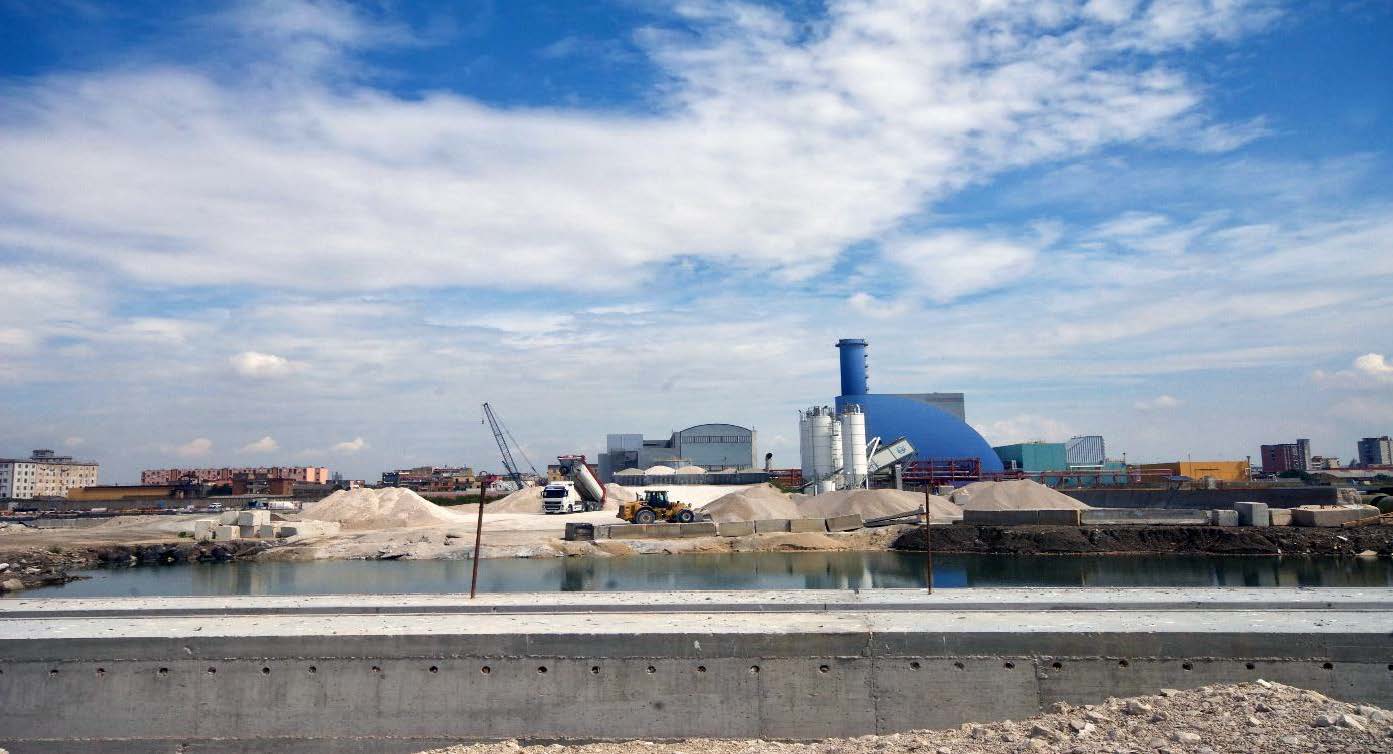 As neapolitan citizens, as well as entrepreneurs, we have great expectations regarding the implementation of the renovation project for the monumental area of the port of Naples, started in 2004 with an international design competition to face the complexity of the redevelopment of the area, given the coexistence of urban and port activities in a central area of the city, daily affected by intense car traffic. The final project, by the group of architects headed by the french M. Euvé, solved the problem by concentrating the allowed volumes, following the demolition of the existing buildings on the docks, along the border line between city and port, transforming this line, today of separation in a filter area.

The architectural solution by Michel Euvé introduced the concept of Filtering Line, a zone used for the reorganization of the mobility flows by separating urban and port flows, setting up the pedestrian paths and the grafts between the city and the port, rationalizing the port gates, providing service equipment, multi-purpose buildings, basement car parks; in short, transforming the port boundary into a great resource for the city and the port.

The project was then remodeled, rethought and above all integrated with the renovation of Ex Magazzini Generali designed by the architect Marcello Canino through the placing of the Soprintendenza ai Beni Architettonici, where the original project envisaged its demolition and the transfer of its volume to a multi-storey structure located on the Filtering Line.

The building will be used for museum functions (museum of the sea and emigration) with a doubling of volumes to be used for university activities linked to the sea (Parthenope University).

The planned interventions are economically significant and also very significant for the upgrading and decorum of an area which we can’t forget is the entrance door to the third city in Italy in relation to the number of inhabitants.

Another great opportunity for the port of Naples, very important for economic operators, consists of the creation of a large Special Economic Zone, in terms of size (over 5,000 hectares of land), of affected population (37 municipalities in which live 35% of total population), which includes the agglomerations of Aversa, Marcianise, Fisciano, Salerno, Pomigliano and other industrial and logistic areas such as Bagnoli, East Naples, in addition to ports and interports. This Special Economic Zone will has its pivot in the Port of Naples, becoming again, as previously in the history of Europe, a strategic zone, if wisely implemented.

It could probably be the instrument of the nonexistent economic policy of the territory, the answer to the deindustrialization of the south, never replaced by equally productive and economically relevant functions.

I think that, apart from the tax benefits which have always been the core business of the Special Economic Zones instrument, being no doubt a strong stimulus for new starts and growth in other parts of Europe and in the world, it’s important to focus on the red tape for this special zones. The more effective the action of simplification will be, the greater the instrument effectiveness.

The considerations made here, related to interventions and existing projects, give hope that the location of our city on the sea could represent an advantage and a leverage for growth and development.

The sea is always a resource to be managed and exploited for the territories. For Naples, the port is an important additional value, for all the activities it generates. From shipbuilding to nautical boating. From freight traffic to passenger arrivals. It is a strategic infrastructure which still needs to be fully made to create a Filtering line able to connect, materially and ideally, the port to the city. From the builders' point of view, in addition to the general economic and social interest, they look at the completion works as a great job opportunity.