The City of Livorno boasts an urban-port identity based on the distinctive stratification that characterised its origins and development and which still today permeates the mind-set and shapes the surroundings of those who live there. The sea, where ships pass and where land and water meet in the never-ending interchange of people and goods, is not only the main source of wealth for Livorno and of the collective and creative imagination of its inhabitants, it also lies at the heart of the construction of the city and of the continuous transformation of the natural and cultural fabric of the waterfront.

Livorno rose from the Tyrrhenian Sea, on the site of a tiny coastal settlement, thanks to the Medici family and soon became a densely populated city and the main port of the Grand Duchy of Tuscany, one of the busiest on the Mediterranean in the seventeenth century. Today, the city continues to claim its main economic, social and cultural vocation from the sea, so much so that port activity is the major driving force for economic development. This seafaring heritage can still be seen in the urban fabric, especially in the waterfront access of the rowing clubs in the city’s districts along the canal of the Fossi Medicei and around the harbour of the Porto Mediceo. The maritime tradition is also expressed in the numerous sailing clubs that populate the stretches of water of the urban fabric. Livorno, like many port cities, also has a great shipbuilding tradition and is home to one of the most famous shipyards in Italy of the nineteenth century, Fratelli Orlando, which was recently purchased by the Azimut Benetti group. Livorno has a new vocation as a port of call for cruise ships, which opens the city to visitors from all over the world. 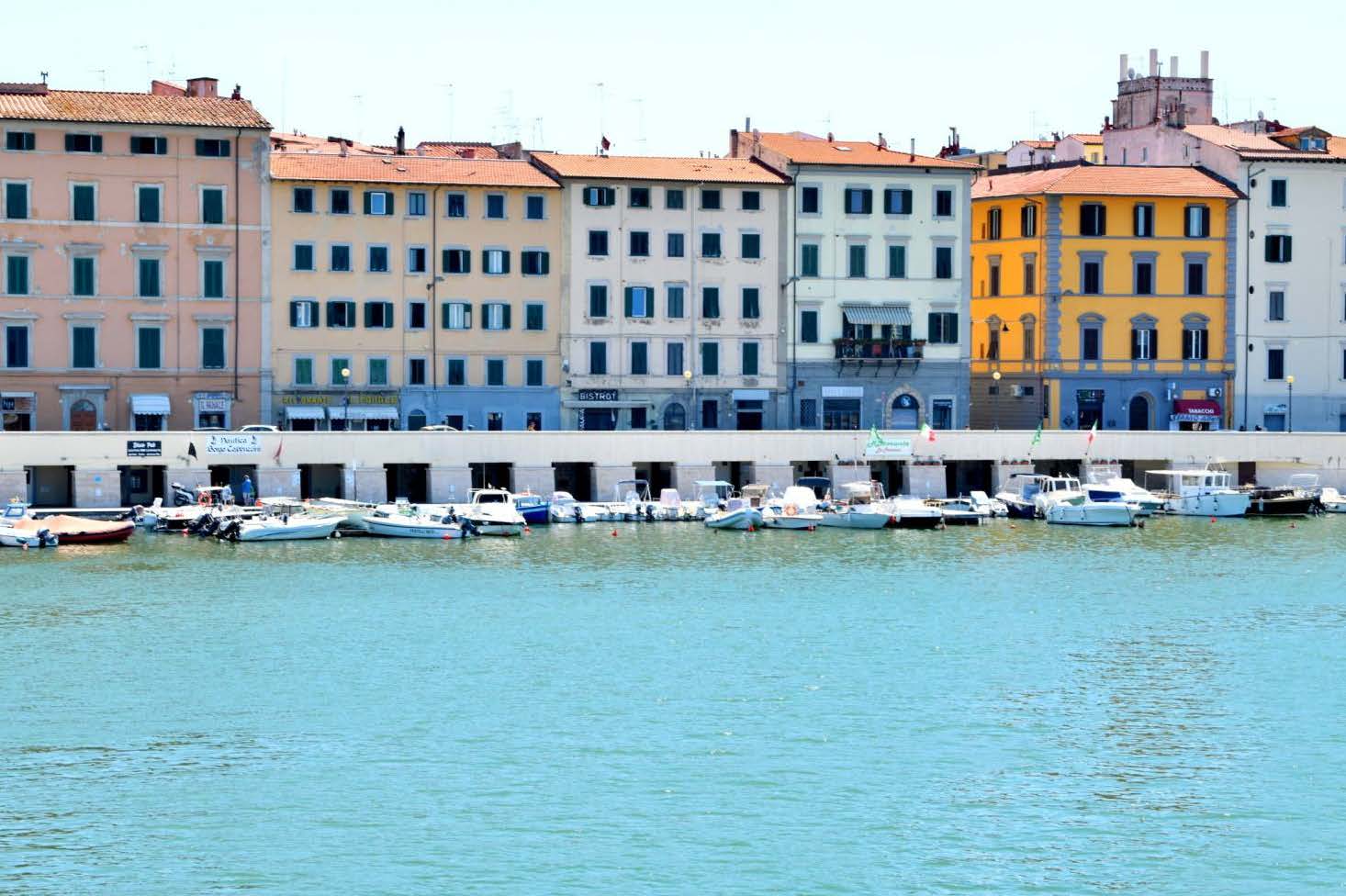 We know that for those who live near the sea, the perception of the space of the shoreline forms a conceptual and visual coordinate that permeates the identity and codes of conduct of everyday life. The sea is a sense of belonging and a fundamental part of the relationship between the people of Livorno and their city. For this reason, watercraft are the principal forms of mediation between land and sea, the extension into the water of the terrestrial habitat and a means of transport around the city or for traversing the open sea. Whatever the vessel, be it a rubber dinghy, a pleasure-, a sailing-, a fishing- or any other kind of boat, for the people of Livorno it is one of the main means for relating to their city and a way of reaching places like the Meloria Shallows, that are part of folk memory, or for sailing out to sea, for fishing or simply for spending free time in the company of friends. The boat is also an expression of the empathy that binds Livorno people to the sea, but also of that restlessness and sense of ‘anarchy’ that pushes them away from the coast in an endeavour to embrace that line of the horizon in perpetual motion. The change that has taken place in the way in which the Livorno maritime community today expresses its relationship with the sea in a ‘special’ way can be interpreted and understood from the transformation in the structure and function over time of these vessels; in this transformation, the traditional elements of the past are rediscovered and redefined in present forms and lifestyles, in which past and present find a complete synthesis.

What I like to define as “barchetipi” (barca = boat + archetypes) are precisely the result of the process of adaptation of the local maritime traditions to the historical and socio-economic transformations that have characterised the development of the port-city of Livorno. One of the most evident examples is the transformation of the urban landscape of the Fossi Medicei canal network. Originally conceived for the transport of goods, today it has become the recreational space of excellence for the “people of the little boats”, that is to say the majority of the city dwellers, who keep their boats moored there.

The photo below shows a 1960s view of the navicelli [2], the traditional boats used for the transport of goods and which testify to an era of port and river traffic that has its historical roots in the Tuscany of the Grand Duchy.

These boats, which disappeared when the Fossi Medicei canal network was no longer used to transport goods, have now been replaced, as the next photo shows, by the many pleasure boats belonging to local residents and which have radically changed not only the urban landscape but also the way in which the Fossi Medicei canals are used. 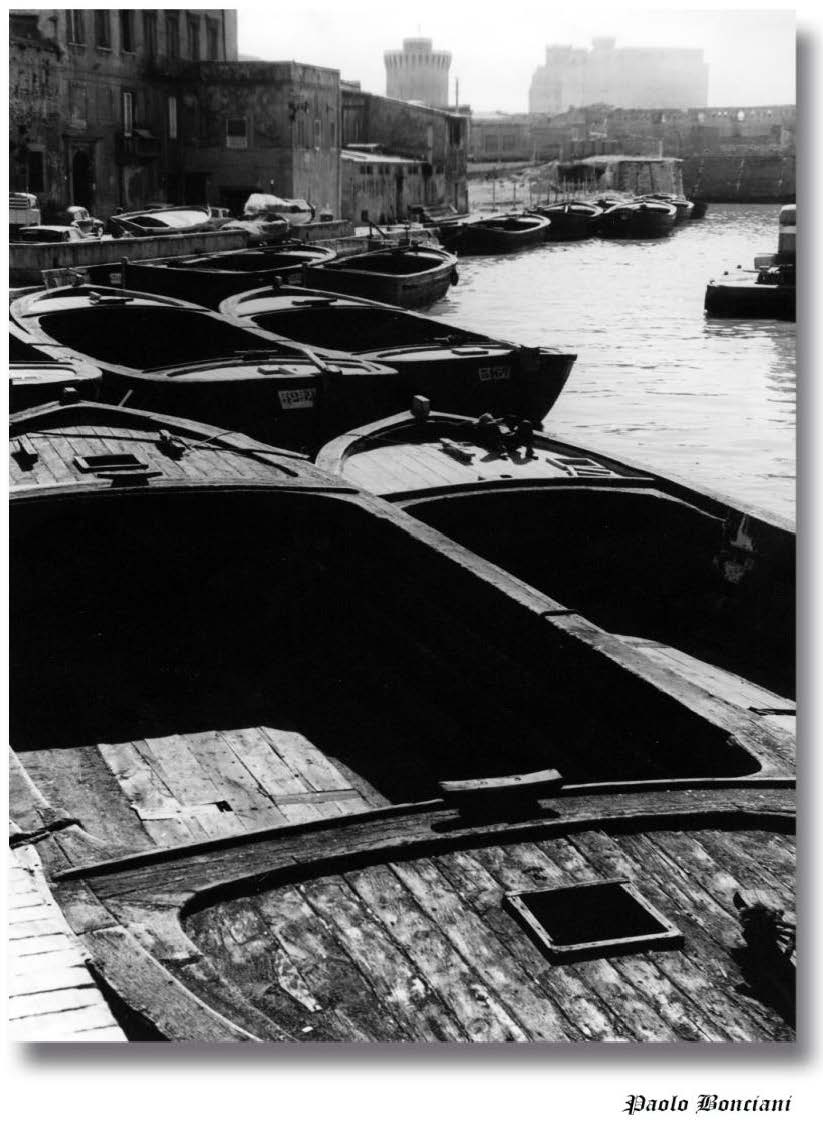 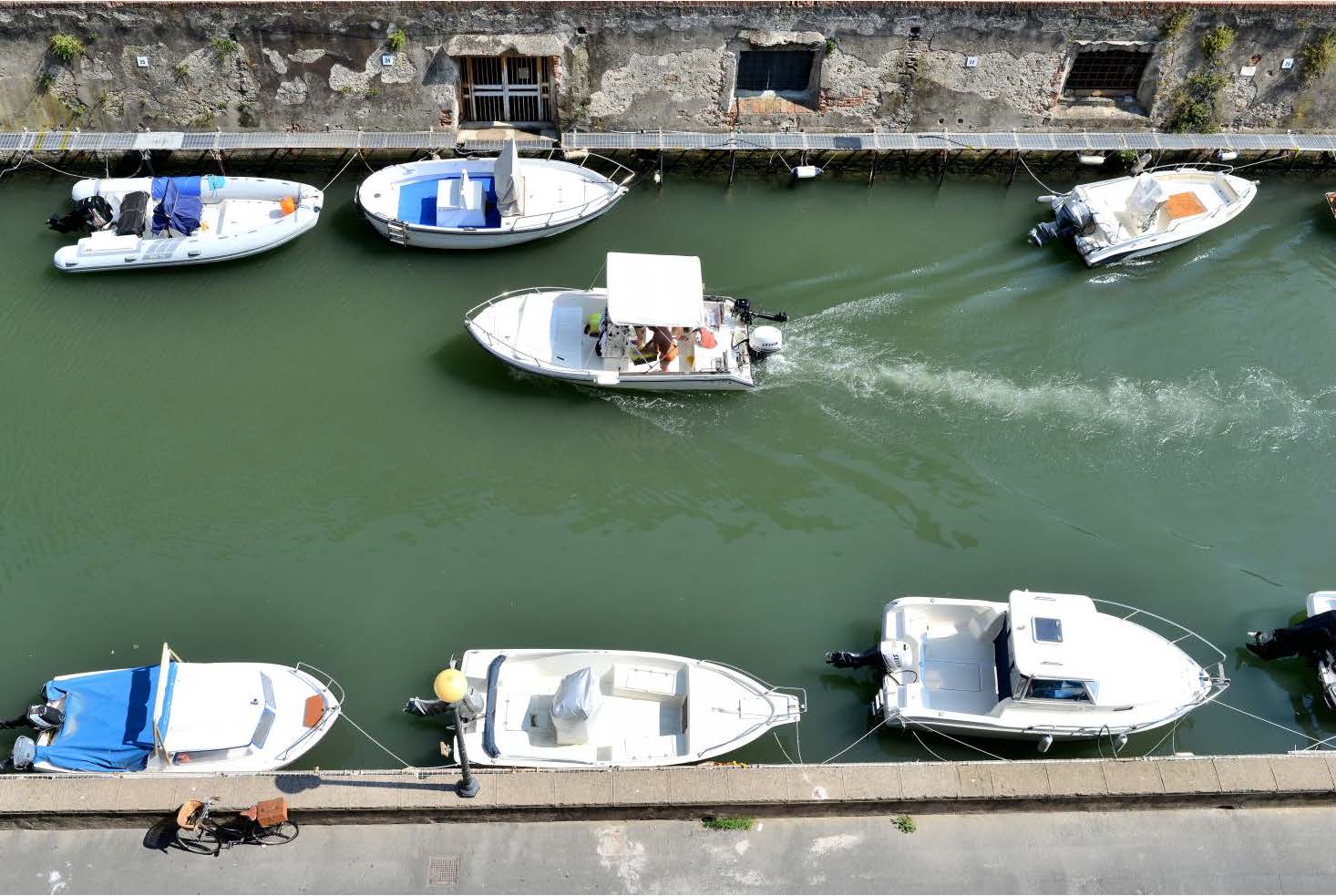 Observing the city from the sea

Looking at the coastal city from a boat, while out sailing, offers a unique insight that unites perception of the whole urban landscape of the city-port of Livorno with that of the individual features bound to the everyday life of the city.

Because of its urban layout and maritime-port identity, Livorno can be truly appreciated in all its complexity by travelling along the Fossi Medicei canals that still connect the city to the port and around the Pentagono del Buontalenti, home to the many boats of the local residents, the sailing clubs and rowing clubs; or by moving away from the coast and crossing the harbour waters that penetrate the city, in particular the areas close to the Porto Mediceo, where the view is often moderated by the sight of ships and boats at berth and in transit, fishing boats coming or going and “gozzi” with their crews. The appeal of these areas by the sea reflects the folk memory of the city, its maritime and seafaring vocation and the desire of its inhabitants to relate to the sea in a synergetic and continuous manner. Living spaces and those of tradition that remain firmly anchored in the mind of the people and in those views of their city from the sea that they treasure at all costs, as a constituent part of their urban and maritime identity. Appreciating Livorno from the sea, along its waterways or out in the open sea, changes the perception of the mainland by broadening our minds to a different form of acquaintance, enhanced by a visual appeal and a deeper understanding.

One such vision of the city is that from aboard a pilot boat as it accompanies ships’ manoeuvres on entry or exit from the port. This is one of the best ways for appreciating not only the work of these people, but also the complex and articulated series of beautiful images of the approach to the city from the sea. The proximity of the port to the city makes these visual glimpses even more significant and exciting and broadens the mind to a unique, urban and port landscape, in which the aspects of the port as a workplace, the transit of ships and the urban context find a visual synthesis that adds to our acquaintance. 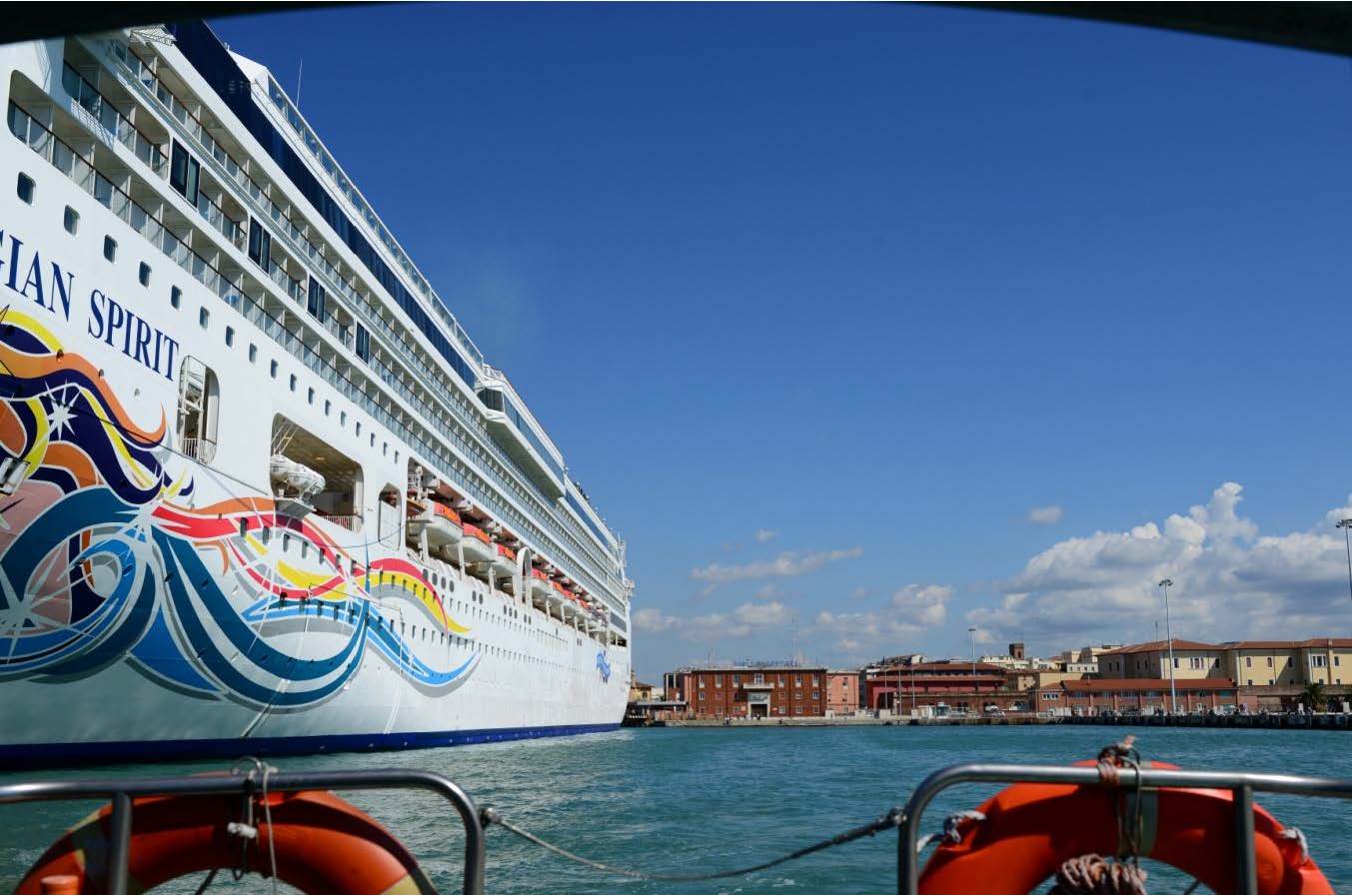 The City of Livorno from the Pilot Boat. (Photo: Paolo Pampana).

In Livorno, many of the most representative places for the city’s history and maritime identity, the cornerstone of folk memory, are situated in the port area or in the area between the city and the port – such as the Old Fortress, the Fonte di Bocca, the Porto Mediceo with its historic walls, the Fossi Medicei canals that connect the city and the port and the Torre del Marzocco located in the freight port, to name but a few – and also at sea, as in the case of the Meloria Shallows. Water connects many of these places, thanks to the Fossi Medicei canal network.

These places still recall their history of the City of Livorno, on the border between land and sea, and in whose architecture, urban places and wealth of multiculturalism produced by the intersection of routes and seas, its maritime identity, a contamination of routes and traditions, can still be discovered [3]. These urban spaces today express and transmit the folk memory of the city.

In this context, Livorno is the urban expression of a community that bases its identity on its relationship with the sea and shipping.

Origins in the salty tang of the sea

Living in Livorno means looking towards the horizon at any time and seeing ships waiting in the harbour. It means listening to the sound of the wind and the waves, breathing in the salty sea air and walking against the wind on the days when the southwesterly “Libeccio” is blowing. This is what it means to experience the identity of Livorno and its maritime and seafaring folk memory, which is kept alive in every part of the city.

This is why, for many people from Livorno, myself included, fishing, walking or just contemplating the city from the Porto Mediceo give us the chance to rediscover ourselves and, in a blend of visual, olfactory and auditory sensations, our awareness of being a part of our maritime and seafaring tradition.

In addition to its architecture and urban landscape, Livorno as a City Port and Sea Port expresses itself through its water vessels of bygone and modern times, the fruits of a collective, creative process, which takes inspiration from and finds its raison d’être in the sea. In Livorno, urban and seafaring traditions are superimposed, mapping the appearance and fabric of the city in which past and present meet.

“Where land divides, the sea unites”, says the writing on a wall in the Porto Mediceo: maritime heritage is a factor that unites all sea communities, in space and time, in every part of the world and throughout their history. 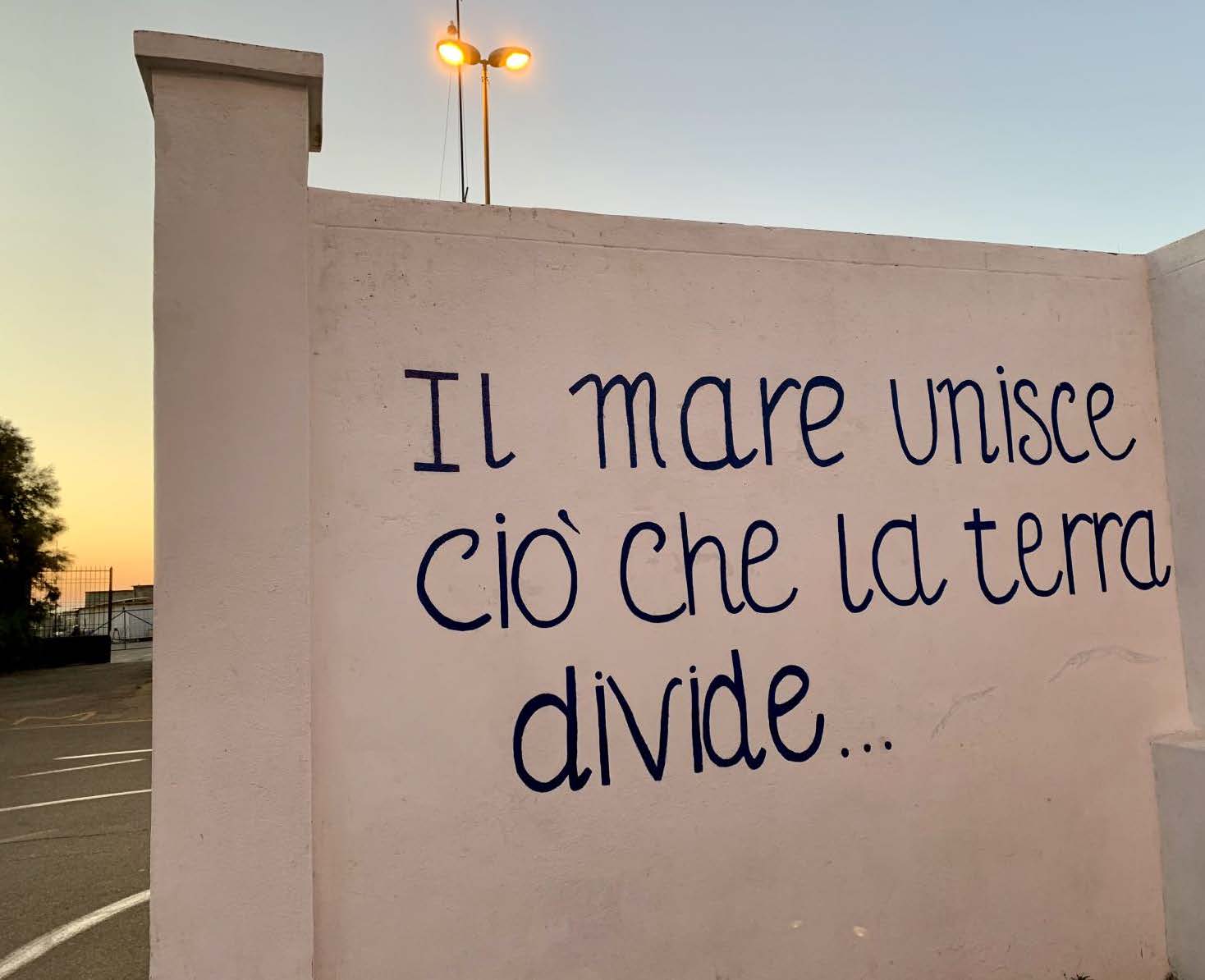 [2] The term navicello refers to two traditional Tuscan boats: the vessel used in coastal waters and the river vessel used for transporting goods, which was towed either by people known as “Alzaioli” (from alzaia, meaning towrope), or draught animals. The last remaining river “navicello” is kept in the former railway warehouse in the port area, and can be visited thanks to a restoration project carried out by the MTS Port System Authority.

[3] Livorno is a city of contamination and hybridisation. Suffice it to recall how the city befitted from the system of immunities and exemptions advanced by the Medici family, in the Livornine Laws (1591-1593), which attracted merchants from the east and the west, Jews, Marranos and Christians…. Frattarelli Fischer L., (2018) L’Arcano del mare. Un porto nella prima età globale: Livorno. Editore Pacini, Pisa.

The city-port of Livorno has a strong identity based on the harmonious fusion of urban and maritime culture. Within this framework, the ability to strengthen the link between port and city is increasingly reliant on the successful conservation of maritime heritage. The aim of this paper is show how, in the case of the City-Port of Livorno, appreciation for maritime identity, as a key factor for sustainable urban regeneration, can be enhanced by exploring and discovering the city from the sea.