The City of Livorno is known for its trade and industry and its main tourism function is linked to the sea and, more specifically, to its port and logistics hub. If we consider traditional tourism on the Italian mainland, the flow of tourists to Livorno has been stable over the last twenty years at around 350,000 visitors; these are mainly from the domestic segment, Italians from the north, from the central-southern regions and from the islands, the majority of whom are in transit, with those eager to explore Livorno and its coastline a minority.

Tourism in officially recognised accommodation in the Municipality of Livorno, 2000-2019. (Source: National Institute of Statistics (ISTAT), Region of Tuscany).

For Livorno, the cruise industry undoubtedly represents one of the main tourism segments. In 2019, 184,000 tourist arrivals were registered in accommodation on terra firma, generating approximately 394,000 visitor days for the municipality, whereas approximately 888,000 cruise passengers docked in the port. Between 1998 and 2008, the handling of cruise passengers in Livorno more than quadrupled from 200,000 to 850,000 passengers and then, after a short break, broke through the million mark in 2012; the market share of the total number of Mediterranean passengers rose from 2.5% to 3.8%, reaching a peak of 3.9% in 2012. Following the change in the geopolitical context of the Mediterranean, the decisions made by the large companies and the specific issue of port competitiveness of Livorno have lead to a slowdown in numbers which, despite an upturn from 2014 onwards, have not yet returned to the record levels of 2012.

Handling of passengers in the Port of Livorno, 1998-2019. (Source: Livorno Port Authority).

In order to assess the economic impact of the cruise industry on the Province of Livorno and on the whole of the regional territory, we used the results of a survey, prepared and administered jointly by IRPET (Tuscany Regional Institute for Economic Planning) and the Port Authority of Livorno, of passengers disembarking in Livorno in 2016 (IRPET, 2018). The survey profiled the characteristics of the cruise passengers visiting the Province of Livorno and the Region of Tuscany. It identified their expectations and needs and measured levels of satisfaction and behaviour, especially spending, and has been seen as an effective tool for evaluating the impact of the cruise industry on the economy of the province and the region as a whole.
The evaluation of the economic impact of the cruise industry on Livorno used IRPET multi-regional Input Output modelling. The model estimates the flows between Tuscany and the other Italian regions (Rest of Italy) triggered by demand within Tuscany. To localise the Tuscany regional impact in the Livorno area, estimate techniques based on the economic activity codes applied by IRPET were used.

The model makes it possible to evaluate the direct, indirect and induced economic impact of the demand expressed by cruises that impacts the relative vectors of expense/investment. Direct impact is constituted by the internal production of the goods and services that directly satisfy the demand expressed by expenditure and indirect impact is constituted by the value of the production factors (intermediate goods and services) purchased by local enterprises to produce goods and services designed to meet the demand expressed by cruise passengers. The induced impact is also constituted by the value to the economy of the extra demand generated by the remuneration of the production factors involved directly and indirectly in the production of goods and services for cruise passengers. The model also enables the evaluation of the imports generated by this process and therefore the weight of that part of the demand that triggers production outside the economic territory of reference (so-called “leakage”). In this way, it is possible to calculate the added value by sector and the employment units brought about by the cruise industry and their relative multipliers. 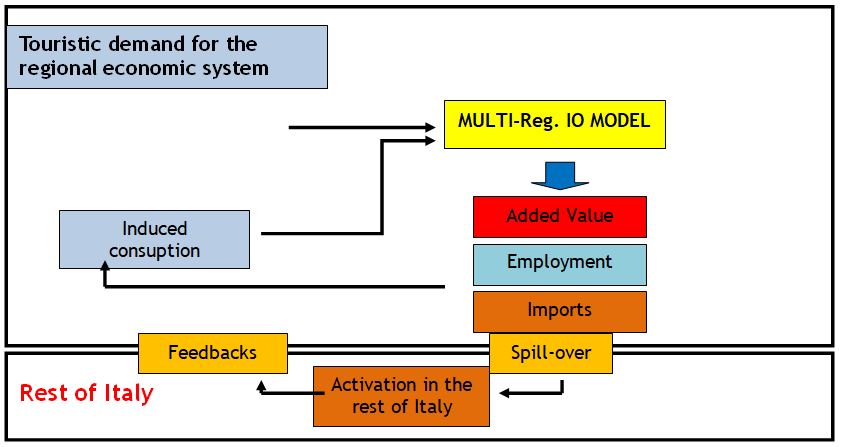 There are five main sources of economic impact from the cruise industry. The first is the construction and maintenance of cruise ships. This component is triggered by overall expenditure on investments in new ships and on maintenance of existing ships by shipping companies and is beyond the scope of this study. The study takes into consideration the remaining four areas of expenditure:

The economic impact of cruises on the region as a whole

Overall, in 2016, cruise activity in the port of Livorno produced expenditure of approximately EUR 52.2 million, which was split as follows:

• € 36.8 million from direct expenditure by cruise passengers ashore, of which 28% was spent in Livorno.
• € 2.7 million was spent by ships’ crews (approximately € 16 for every crew-member going ashore).
• € 10.9 million running costs for port services paid by ships docking.
• € 1.8 million average annual investment made by the Port Authority and the company, Port of Livorno 2000, for port infrastructures serving the cruise industry.

Approximately 50% of the total expenditure was received directly by the city of Livorno, € 25.7 million. Of the total expenditure, 71% was by cruise passengers, 21% on port services and expenditure by crews accounts for about 5%, for an annual average on investment of 3%. The GDP multiplier indicates that every cruise-related Euro spent triggered an average of only € 0.60 in GDP in the region. Considering that the value of the indicator calculated for tourism overall in 2015 was approximately 0.94, we see that the structural character of cruising is not particularly positive, namely, the high degree of leakage by which it is structurally characterised, or rather the high coefficient of interregional and international imports required to satisfy the demand by the cruise industry for tourism goods and services.

Category and amount of expenditure relating to the cruise industry: 2016. (Source: IRPET calculations on survey data).

The economic sectors most involved in the cruise industry are naturally those of services. In first place, retail and wholesale trade, which accounts for 22%, followed by transport and warehousing services (19%), real estate services (12%), other business services (9%), accommodation and catering services (5%), other social and personal public services (5%), legal, accounting and consulting services (4%), insurance and financial services (4%), construction (3%), Art and Entertainment (3%). All these service activities account for about 86% of the total added value produced. 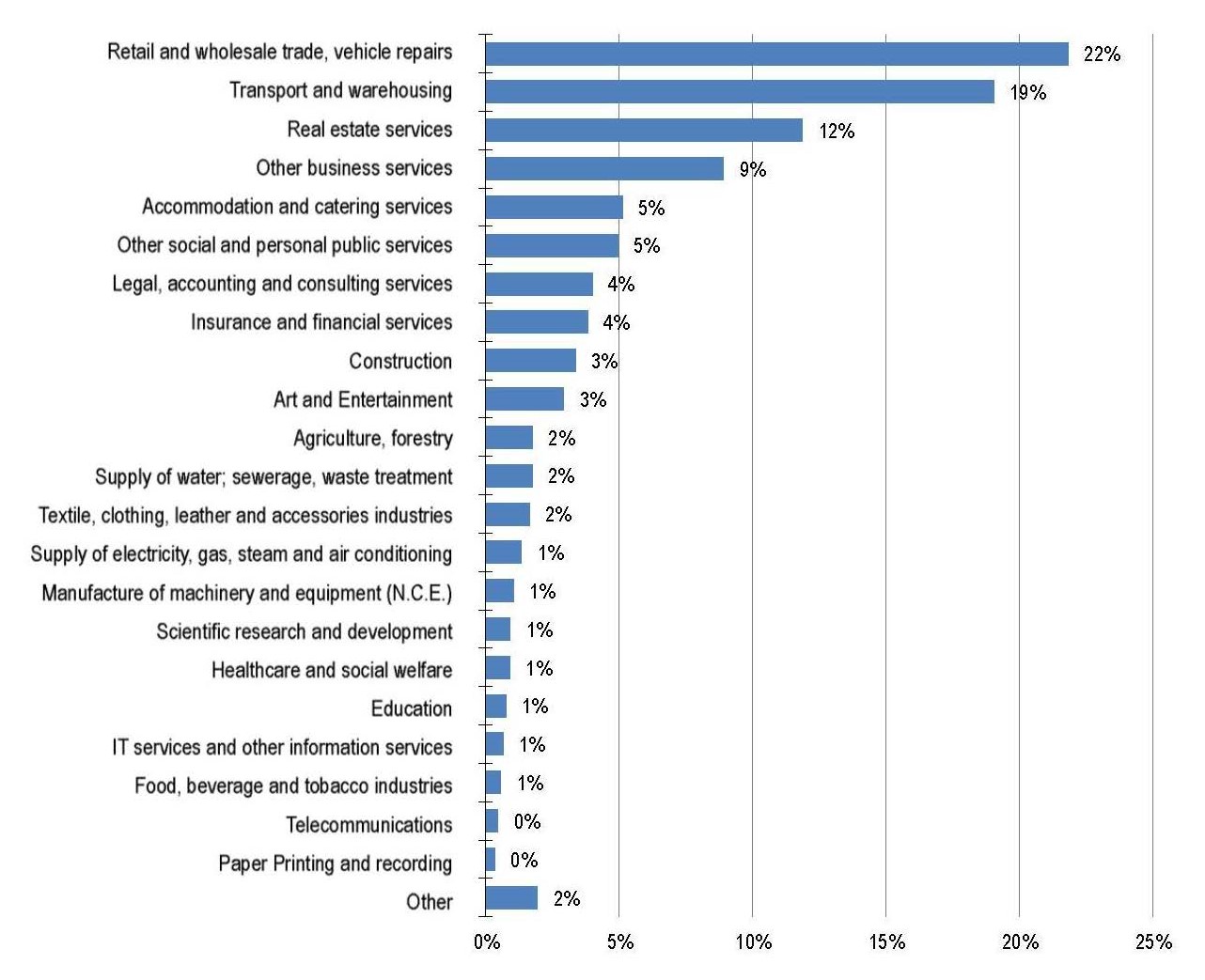 The added value activated by the cruise industry in Tuscany: distribution by sector. (Source: IRPET calculations on survey data).

The economic impact of cruises on the Province of Livorno

Of the total expenditure of € 52.5 million, approximately 50% regards the Livorno area, put more precisely, 100% of the expenditure for investments in port infrastructures, 100% of the expenditure for port services by shipping companies, the 100% of the crews and 28% of the expenditure by cruise passengers. The economic impact generated by this amount of expenditure in terms of added value was approximately € 8.8 million, equal to approximately 0.11% of the total for the entire province and just under 3% of the added value generated within the municipality. It is therefore not a huge impact and activates around 142 equivalent full-time employment units. Moreover, this was to be expected. On the one hand, due to the nature of the cruise business, most of the expenditure on accommodation and catering takes place on board and not ashore and most of the excursions are carried out outside the Livorno area. On the other hand, since the smaller the portion of the territory within which the impact of tourist demand is calculated, the more significant are the imports required to satisfy the demand that is triggered, or put another way, the territory is less able to satisfy that demand without having to create a large number of imports.

Evaluating the economic impact of the cruise industry on Livorno is by no means an academic exercise. Cruising is an especially dynamic segment of tourism demand and is of growing economic importance on the world scene. In this context, the Mediterranean has been perhaps the fastest growing destination over recent decades, even if the current political instability and terrorism threats affecting its southern and eastern shores in particular have temporarily slowed this momentum. Forecasts for the next few years indicate a further increase in volume but also signal increasingly fierce competition to corner market shares between destinations and ports. Livorno, like other ports in the Mediterranean, has experienced significant growth over the last twenty years in terms of the volume of cruise passengers, growth that was halted in 2012 and which subsequently resumed at a more moderate pace and trend. Today, in any case, cruising represents the most quantitatively significant segment of the tourism economy for Livorno.

The survey of tourists made it possible to assess the impact of the cruise industry on the economy of Livorno and Tuscany in 2016. Of course, the economic impact of cruising goes far beyond the impact determined simply by passengers’ expenditure ashore, which nevertheless makes up the most significant part. The study therefore considered four components of expenditure. Expenditure ashore by cruise passengers, estimated from the survey of cruise passengers. Expenditure ashore by crew-members. Expenditure by cruise companies on port services for docking and berthing in the port. The average annual expenditure on investment in port infrastructures, attributable to use by cruise industry. Overall, in the Port of Livorno in 2016, the cruise industry produced an expenditure of approximately € 52.2 million, which generated added value of 26.7 million and 31.6 million GDP in Tuscany, in addition to 470 equivalent full-time employment units. A considerable impact, therefore, even if a large proportion of the expenditure was dispersed through interregional and international imports (around 40%). The Livorno economy received approximately 49% of the expenditure, equal to € 25.7 million, which determined added value of approximately € 8.8 million and 142 equivalent full-time employment units. An economically significant impact, even if the coefficient of generated imports inevitably widens, the smaller, and therefore less economically self-contained, the economy is and on which the impact of the expenditure is evaluated.

In conclusion, it is clear that the cruise industry has acted as a shock absorber for the economic downturn and could certainly have been more significant had the growth in the number of cruise passengers not been halted as of 2012. Overcoming infrastructure limits, improving the quantity and quality of port services and greater inclusion of the port as part of an improved and integrated supply of tourism facilities emerge as contributing factors in increasing the positive impact of the cruise industry on Livorno as a destination. This is a difficult and appealing challenge that can only be won if the provincial capital of Livorno is able to produce those intangible but crucial resources (Trigilia, 2004) represented by the trust between institutional players and by a set of co-ordinated and wide-ranging strategies, which constitute the prerequisites for local development.

CLIA (2019), Contribution of Cruise Tourism to the Economies of Europe 2018 Edition.

CLIA (2019), Contribution of Cruise Tourism to the Economies of Europe 2018 Edition.

The paper assesses the economic impact of the cruise industry on the economies of Livorno and Tuscany by means of an analysis using IRPET multi-regional Input Output modelling. Expenditure data was taken from official statistic sources and from a direct sample survey of passengers disembarking in Livorno in 2016. The analysis considered four key spending elements. Expenditure ashore by cruise passengers; Expenditure ashore by crew members; Expenditure by cruise companies on port services for docking and berthing in the port; and lastly, the average annual expenditure on investment in port infrastructures, attributable to use by cruise industry. Overall, in the Port of Livorno in 2016, the cruise industry produced an expenditure of approximately € 52.2 million, which generated added value of 26.7 million and 31.6 million GDP in Tuscany, in addition to 470 equivalent full-time employment units. A considerable impact, therefore, even if a large proportion of the expenditure was dispersed through interregional and international imports (around 40%). The Livorno economy received approximately 49% of the expenditure, equal to € 25.7 million, which determined added value of approximately € 8.8 million and 142 equivalent full-time employment units. An economically significant impact, even if the coefficient of generated imports inevitably widens, the smaller, and therefore less economically self-contained, the economy is.