It’s a warm summer night, the moon is shining and her light beams glitter on the surface of the freshwater of a bay of the Mississippi delta, thus framing warm and spicy crustaceans. This is the perfect scenario for a charming date with the beautiful Yvonne.

Soft music in the background is the marked deep voice of Fats Domino, the city icon, that reinterprets Jambalaya (On the Bayou), the evergreen country-blues by Hank Williams, composed for his beloved Yvonne. 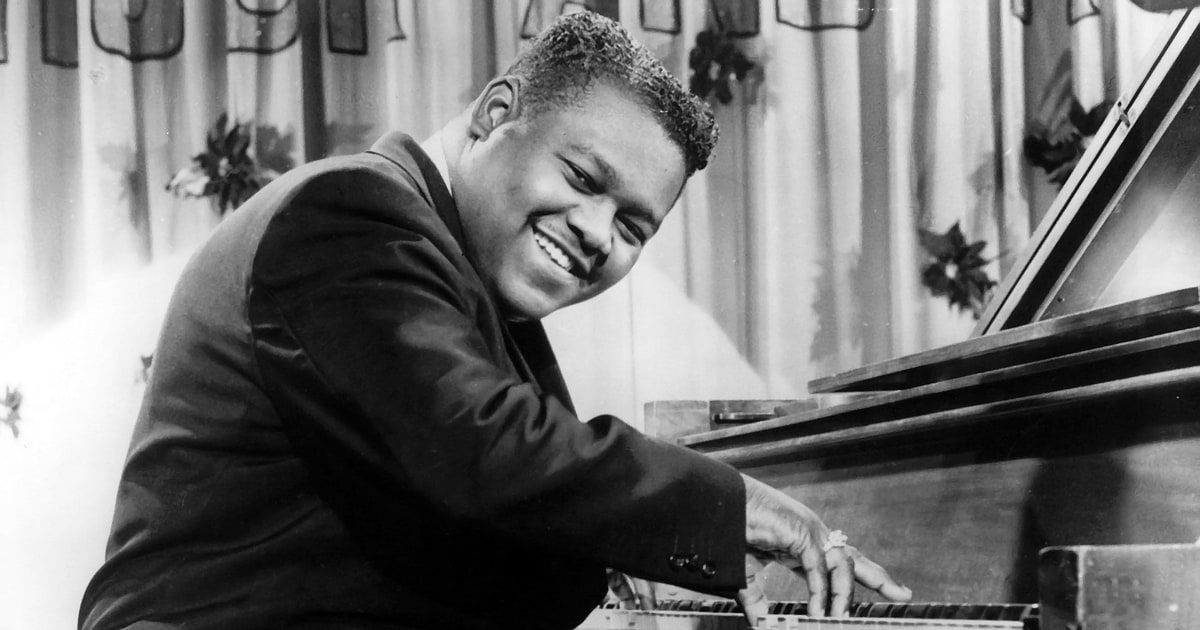 Fats Domino (New Orleans, 1928 – Harvey, 2017). The voice of New Orleans, leader of rhythm and blues between the Fifties and Sixties, with his band he reinterpreted a jazzy version of the piece Jambalaya (On the Bayou) by Hank Williams Jr., 1952.

On the theme of “Jambalaya and a crawfish pie and fil gumbo / ‘cause tonight I’m gonna see my ma cher amio”, the atmosphere becomes warm and sensual, alluding to the hot exotic shades of the jambalaya, the crawfish pie and the gumbo, three extraordinary works of art, ambassadors of the culinary creole and Cajun of New Orleans.

To understand New Orleans, it is necessary to look at her geographically: wedged on the majestic delta of the powerful Mississippi. Like any other city sitting on river deltas, her relationship with water is not linear (longitudinal as in coastal cities, transversal as in fluvial cities); rather it is complex and deep. Water appears where you least expect it, sweet and salty at the same time like her food, precious and painful like her story, with a beginning and end like her parades.

Once again, it happens in a port city (the port of New Orleans is the second biggest of the United States, only second to New York) that different cultures, ethnic groups, social classes, colors, flavors, lifestyles, languages, rituals, sounds, local prime materials and imported goods mingle so perfectly to consolidate in established traditions.

New Orleans is popular for the creole and cajun kitchen, two mixtures of French, Spanish, Portuguese, Italian, African and central-american cooking, that fully mirror the story and character of the city.

French and Spanish fought for Nouvelle Orléans many times in the eighteenth century, while in the nineteenth century, thanks to the huge harbor connected to 23.300 Km of inner sailing routes, the city became one of the main trading hubs between Europe, South America and Caribbean. From New Orleans, the vast majority of whole United States internal production – cereals, cotton, petrol, food – is exported; other goods from Latin America – cocoa, coffee and bananas -, prime material from Europe and slaves from Africa are imported.

And so it happens that the Creole cuisine, reserved to the aristocrats and the very rich owners of cotton plantations, arises from the adaptation of European culinary traditions (above all the Spanish ones) to the local goods, while the Cajun cuisine, travelling from France to Canada and from Canada to Louisiana by the Acadian settlers, changed recipes and ingredients according to which prime material was available in the newly colonized countries.

In New Orleans the two cooking often fused together to give rise to real works of art such as the jambalaya “of the beautiful Yvonne”. Very likely born as a creole attempt to reinvent the Spanish paella, the American tomato replaces saffron, and a radical twist is given by the choice of the Caribbean spices that find their moment of triumph in the Cajun version. Here, prawns and sausages happily show off accompanied by a crunchy rice, garnished with the fundamental “holy trinity” made by celery, onions and bell peppers. 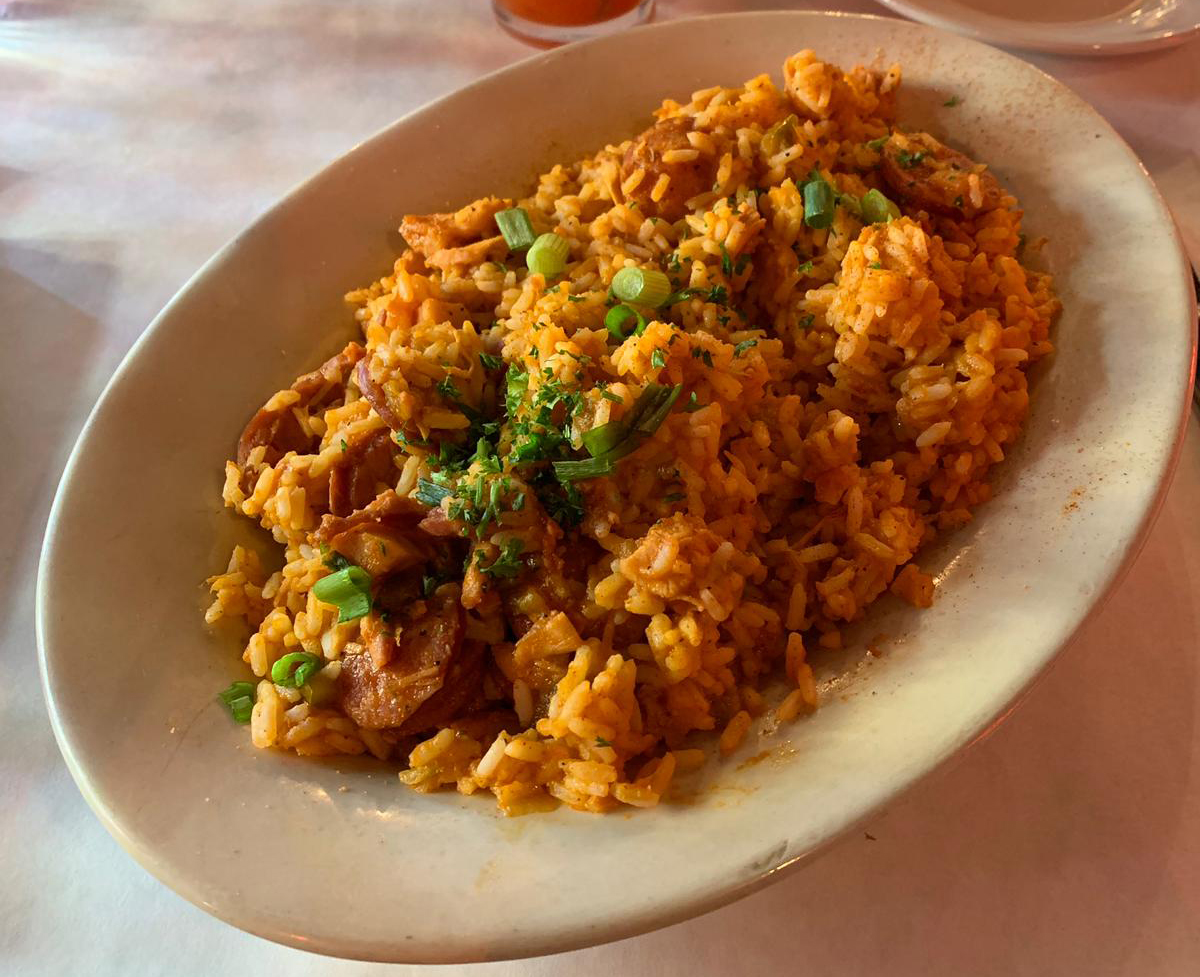 The crawfish pie derives from the Cajun tradition hat was capable to fully exploit the more abundant food available in the bayou: the freshwater prawn, that has happily colonized the ecosystem of Mississippi delta, characterized by slow rivers, ponds and swampy lakes. The recipe, that has as a base a pie, a lot of prawn on top, butter, white pepper, black pepper and cayenne pepper, the always present “holy trinity”, clearly shown similarities with the French kisch, rustic savory pies loved by French farmers.

There is so much prawn around that it sneaks not only into pies, but also swims inside the glasses of long drinks Cajun Bloody Mary, super spicy cocktail served in New Orleans Creole Cookery Seafood, in the French quarter, the oldest area of historical center. Luckily, also fantastic bourbon and great rum are also available…! 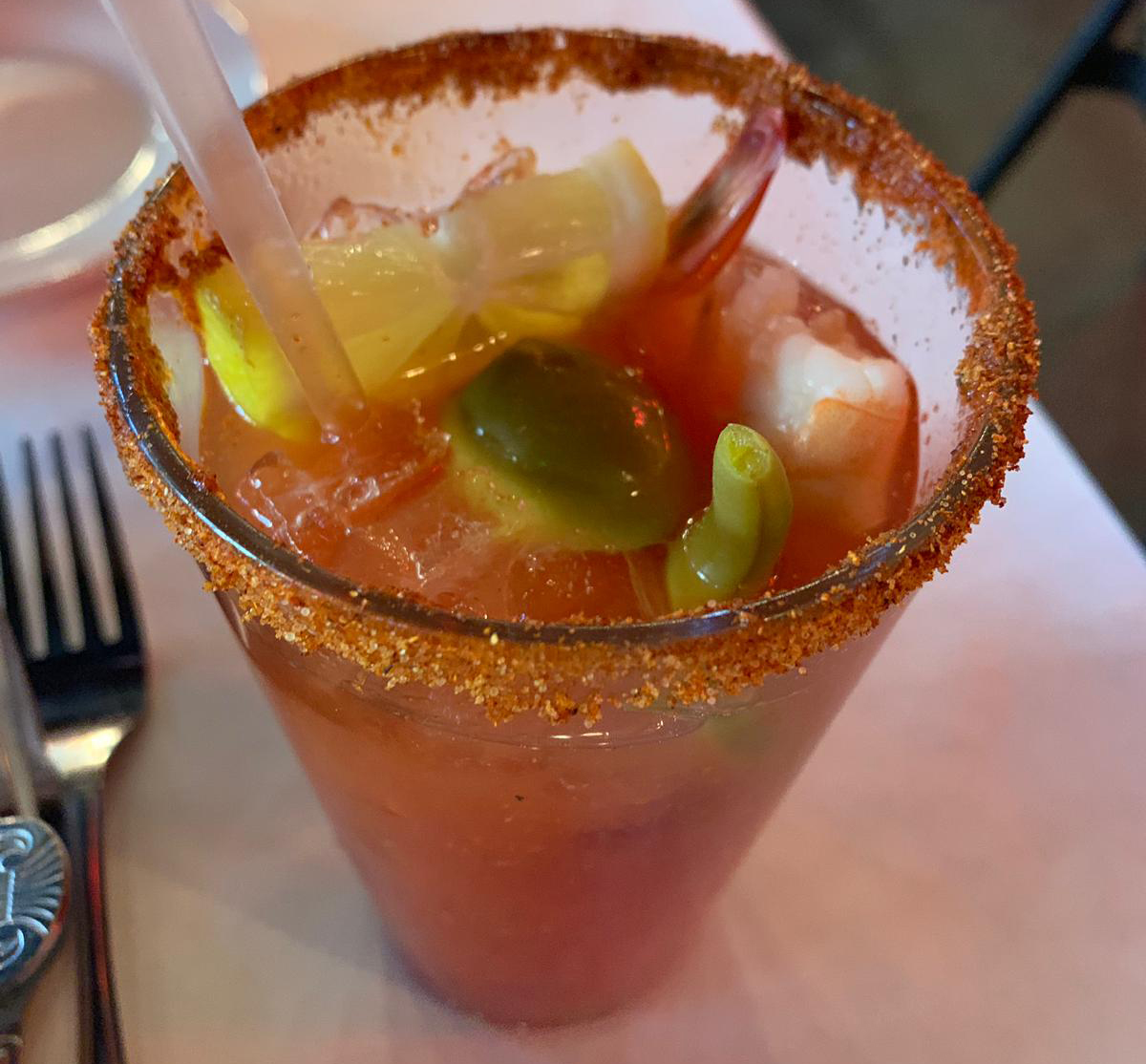 The gumbo is a Cajun recipe adopted by the Creole cuisine. The base is the bouillabaisse of Marseille, where spices of Provence are replaced by filé powder, a spice obtained from sassafras leaves, very aromatic and with agglutinating and anti-inflammatory properties, where the original recipe was passed on by the of American Indians.

The special talent of the gumbo is inherent in the okra pod, a plant originary from tropical Africa, due to its jelly liquid guarantees creaminess to the soup, and in the brown roux, a mixture of oil and flour cooked to brown before adding it to the soup. The ingredients are often prawns (…of course!) lobsters, oysters, molluscs and other kinds of fish, or a variety of meats. Always there the “holy trinity”, yet this time mixed with another “holy trinity” readapted by the Cajun tradition and constituted by thyme, Worchester sauce and Tabasco.

Compared any other soup in the world is its creaminess, guaranteed by brown roux, sassafras and okra, that renders this recipe so unique! 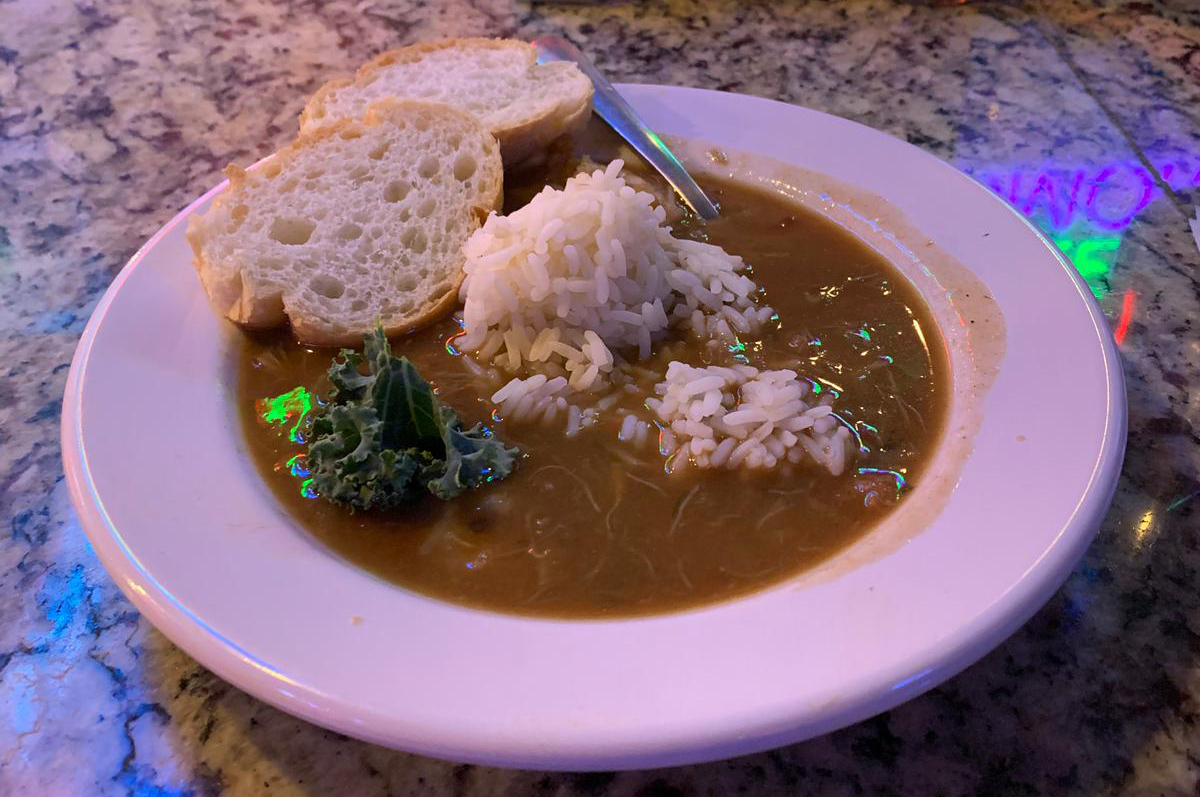 Contaminations and gambles: that’s what New Orleans is! She can seduce you all in a sudden with a bbq with oysters grilled on their half shell, garnished with butter and cheese, filled with crab and prawns, decorated with sauteed mixed vegetables and served with bread spread with Cajun sauce and cheese. All these gastronomic notes donate a sublime symphony to the palate, first, to the soul, after. Like jazz, that right in New Orleans was played by African slaves and has on top of the list Louis Armstrong as the most important artist. 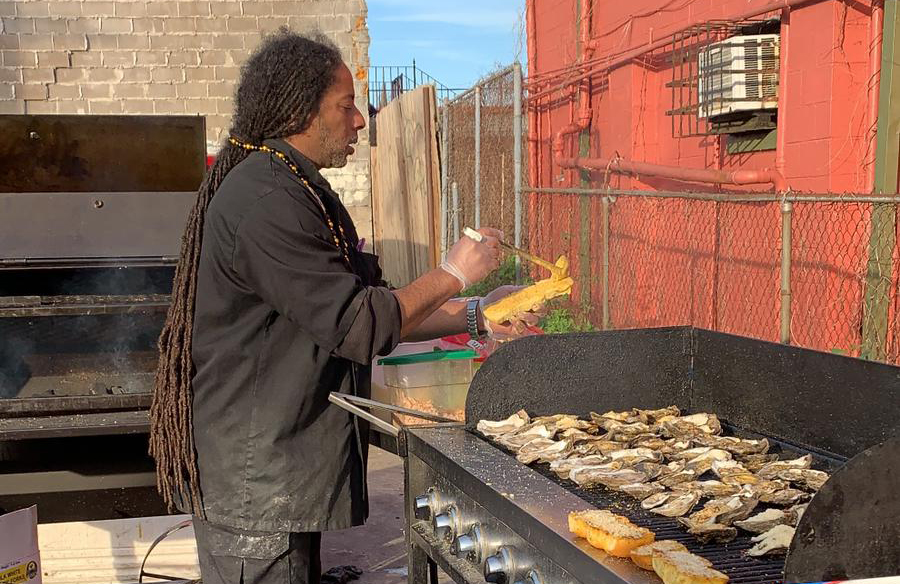 Oyster Bienville prepared as street food on a barbecue improvised on a street of the Treme quarter.

Great success for a Sicilian invention, the muffuletta, a little focaccia bread as big as the palm of a hand that in Palermo is garnished with anchovies and grated caciocavallo cheese; imported in New Orleans by the Sicilian businessman Salvatore Lupo, muffuletta is here proposed in the American size version, enriched by a filling of cured ham, cheese, gherkin and vegetables. 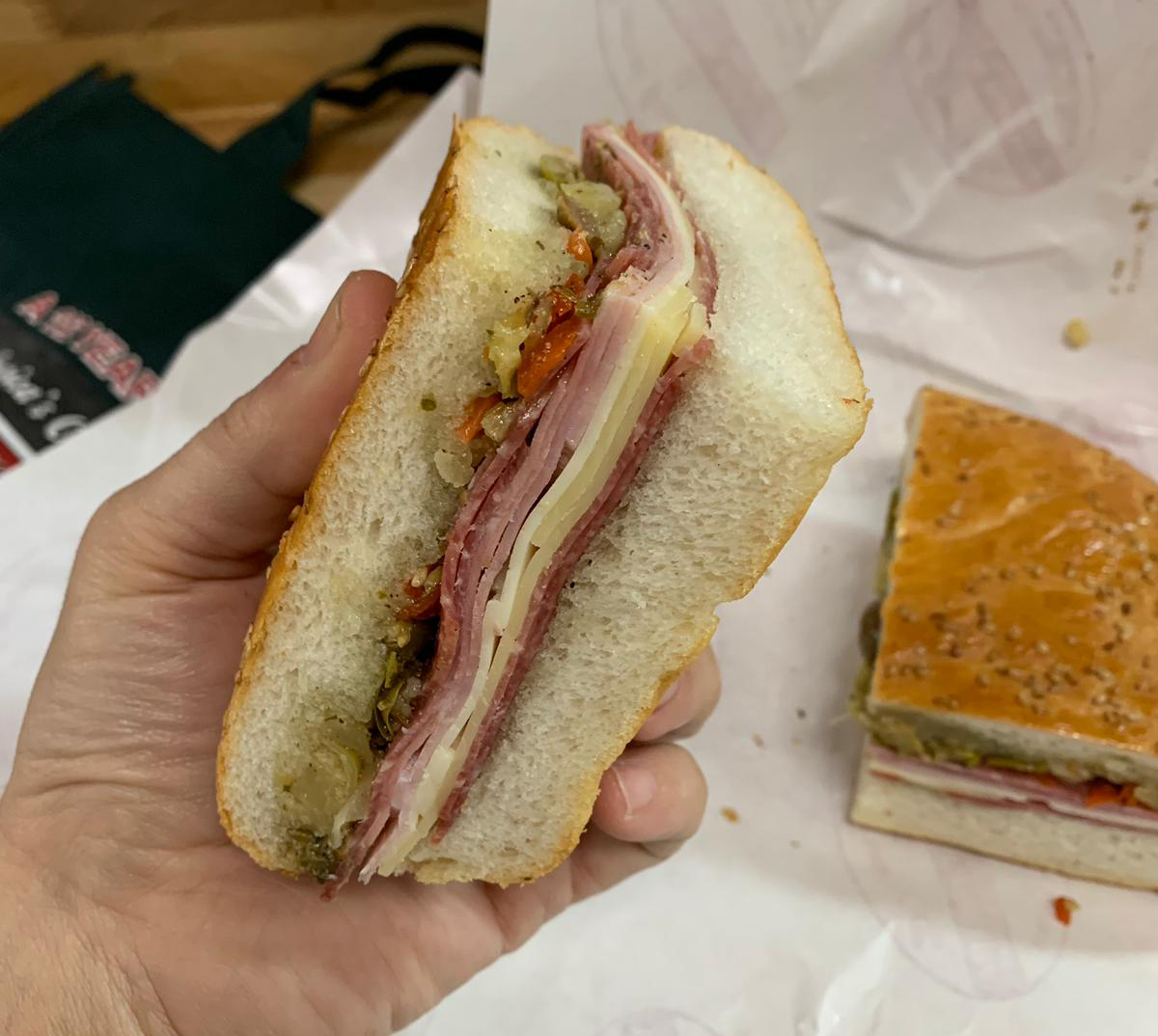 Muffuletta at the Central Grocery in Decatur Street.

Synecdoche of the city is the Café du Monde; cul de sac of humanity, that has welcomed and comforted generations of women and men traveling though New Orleans, known for its black coffee and the famous beignets. An heritage passed on by Acadians, these fried sweet doughnuts are neatly covered in icing sugar which, after the first couple of bites, expect to find it all over your clothes! But be joyful as your body will be then lifted by the lightness of New Orleans!

That’s when you begin to understand New Orleans, her being place and world, matrix of a urban cosmopolitanism. 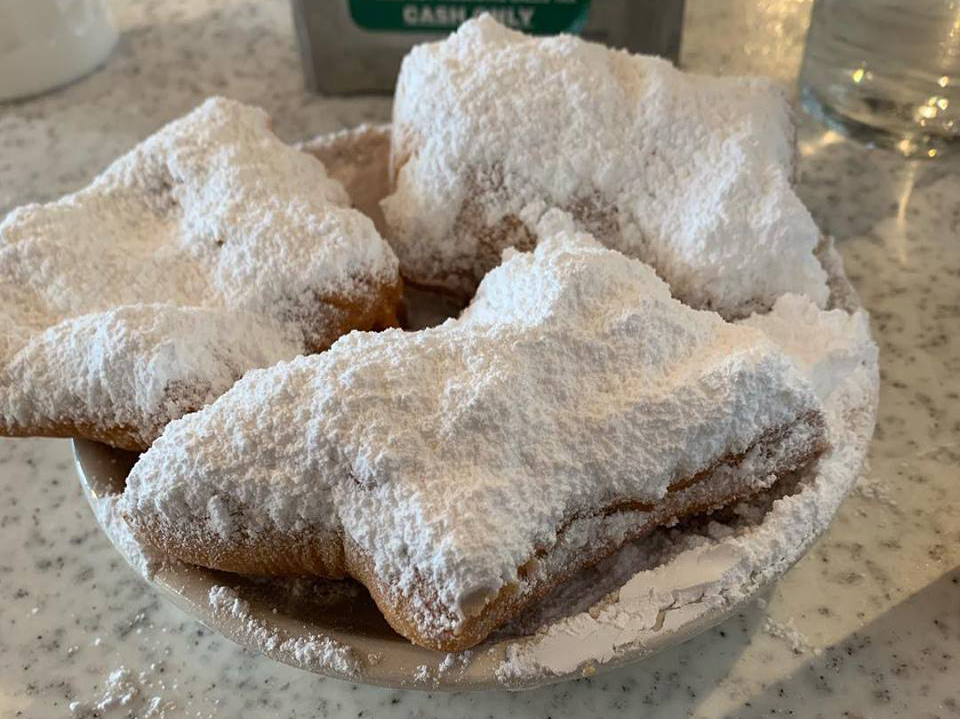 Beignets at the Café du Monde.

In a city that remixes everything and generates life to the rhythm of jazz, parades are a periodic appointment throughout the year. Among the most important, the Mardi Gras Parade, a celebration that mingles players and watchers and where after a little while everybody turns into “the parade”. Is a cheerful game between those who shows off to gain the other’s attention and seduce to receive gifts thrown on the parade carriages. With the night getting longer and longer, the battle of receiving a colourful necklace turns into a proper game of seduction between women and men, standing in crowded balconies of the French District, epicenter of celebration, of love and freedom, where every mask reveals its real soul, hidden behind serious outfits during the rest of the year.

At the end of the parade everyone goes back home with a rich loot, which mirrors one’s will to get in the game to win, amongst the thousands of hands, the trinket thrown by the beautiful Yvonne! 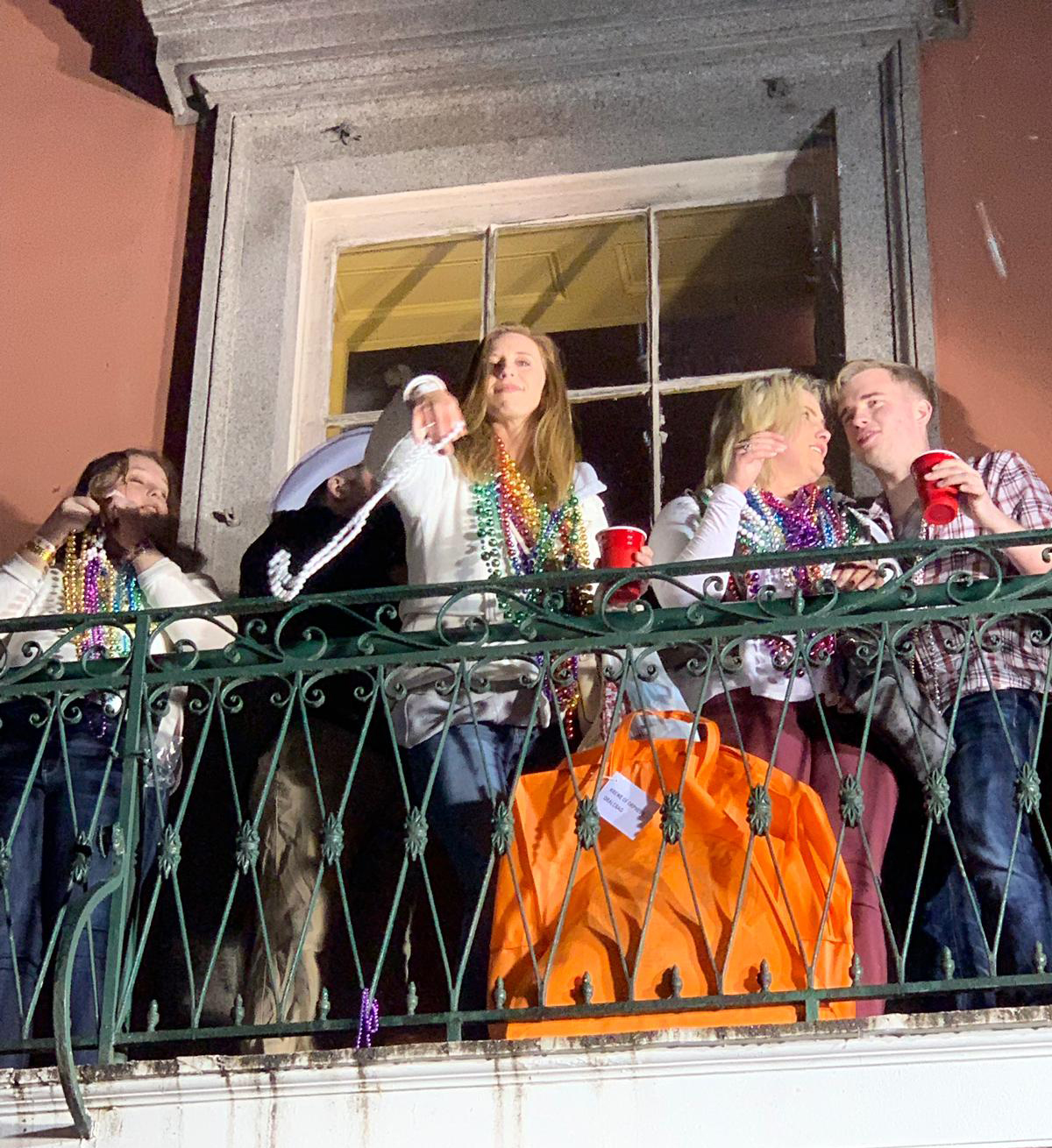 Mardi Gras Parade, necklaces throw from the balconies by a celebrating crowd.

Head Image: Image of the sign of the restaurant Oceana Grill in the French neighbour of New Orleans. Here dishes typical of the creole and cajun cooking are served, Po’ Boy and much more of the local gastronomic cultures.