“La cuina d’un país és el seu paisatge posat a la cassola” (“A country’s cuisine is its landscape in a pot”) the Catalan Joseph Pla i Casadevall wrote. As for Barcelona, located between the Pirenees and the Mediterranean Sea, being above all one of the most important port cities of Europe, what would you expect to find in her dish?

Undoubtedly, Barcelona offers a “mar y muntanya” (surf ‘n turf) cuisine contaminated by Occitan and Valencian influences and enriched by the humongous transit of goods through the port junction, from which a rich variety of recipes where generated.

Pièces de résistance of Catalan cooking are: tortillas de patatas (spectacularly thick omelets made with eggs, potatoes and onions), paella (of Valencian influence, available in different versions with fish, meat, vegetables and relative combos), esqueixada de bacallà (a cold dish made with raw desalted codfish cut in small pieces and combined with tomatoes, onions, peppers and black olives), pollo asado a la catalana (chicken seasoned with raisins, dried prunes, almonds and white wines) and, last but not least, the famous crema catalana, characterized by her warm, sweet and crunchy sugar crust, perfectly in contrast with the smooth and fresh cream hidden underneath and made with egg yolk spiced with lemon and cinnamon. According to tradition, the crust is caramelized with the hierro para cremar, a scorching cast iron disk.

Other dishes belonging to the Catalan cuisine express a more rustic tradition but their delicious taste reflects the brilliance in producing delights starting from simple ingredients. For example Pa amb tomàquet: all you have to do to taste this delicacy is to rub a slice of homemade toasted bread with garlic and tomato, then season it with salt pepper and olive oil. Of the same category are Patatas bravas (pan-fried potato chunks, seasoned with paprika finished with a dressing of mayonnaise, tomato, tabasco and garlic), the mel i mató (fresh goat cheese covered with honey and walnuts or pinenuts), and the bikini, a simple but very popular ham-and-cheese toast that has been reinterpreted in several occasions thus becoming a real gourmet. For instance, at the Carles Abellan’s Tapas 24 (Michelin star in 2007), it is known as Bikini Comerç 24 and is transformed into a yummy toast with Iberian ham, buffalo mozzarella and white truffle.

One of the most rustic traditional dish of Barcelona, the Pa amb tomàquet is made directly by the diner with homemade toasted bread rub with garlic and fresh tomato, with a touch of salt and olive oil.

The Bikini Comerç 24, a gourmet variation of one of the most classic snacks of Barcelona, reinterpreted with fine ingredients such as Iberian ham, buffalo mozzarella and white truffle. 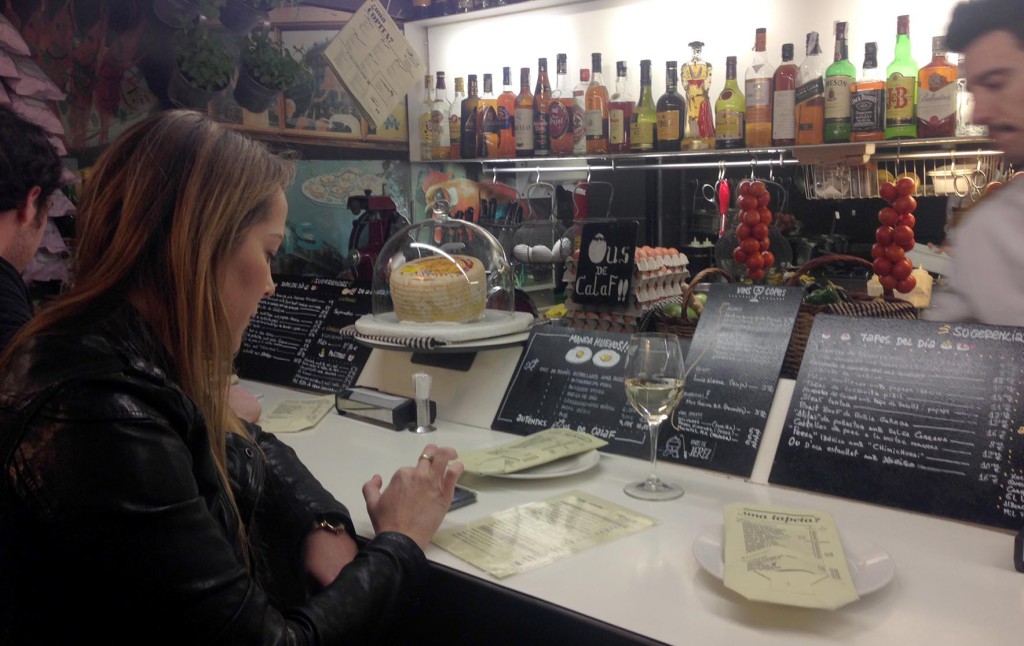 Tapas 24, the small and crowded basement of Carles Abellan, offers rich and interesting variations of tapas and dishes of the local tradition.

The real expression of the port-commercial lively nature of the city reaches the top in the markets: 39 indoor markets, plus 4 outdoor ones represent the real beating heart of Barcelona’s gastronomy.

Every day, markets proliferate with sellers, buyers, maintenance staff but also with tourists that, following the tips offered by their tourist guides, cannot avoid visiting markets, being a fundamental city top ten. And it is a real “discovery” of the esperit of Barcelona, indeed, way more thrilling that visiting a museum!

Just take a moment … now close your eyes … you can almost see THE MARKET, the stands … a triumph of choreographies of colorful fruits, flowers, meats, fish, crustaceans, vegetables, sweets, spices, local and exotic products, eggs of any shape or form. You can also see prêt à porter food such as fruit salads and fruit shakes (with one Euro or two you can quench your thirst with a glass of healthy and fresh fruit juice with no additive or preservatives, mixed in creative and balanced variations). What about tapas? With their amazing variety, they are the undiscussed representatives of the marked and limitless imagination of Catalan people. Many are the restaurants proud of having as pantry the market itself. Freshness, seasonality, variety, Km0 and edible imagination with an awesome view over a market in full swing: super! 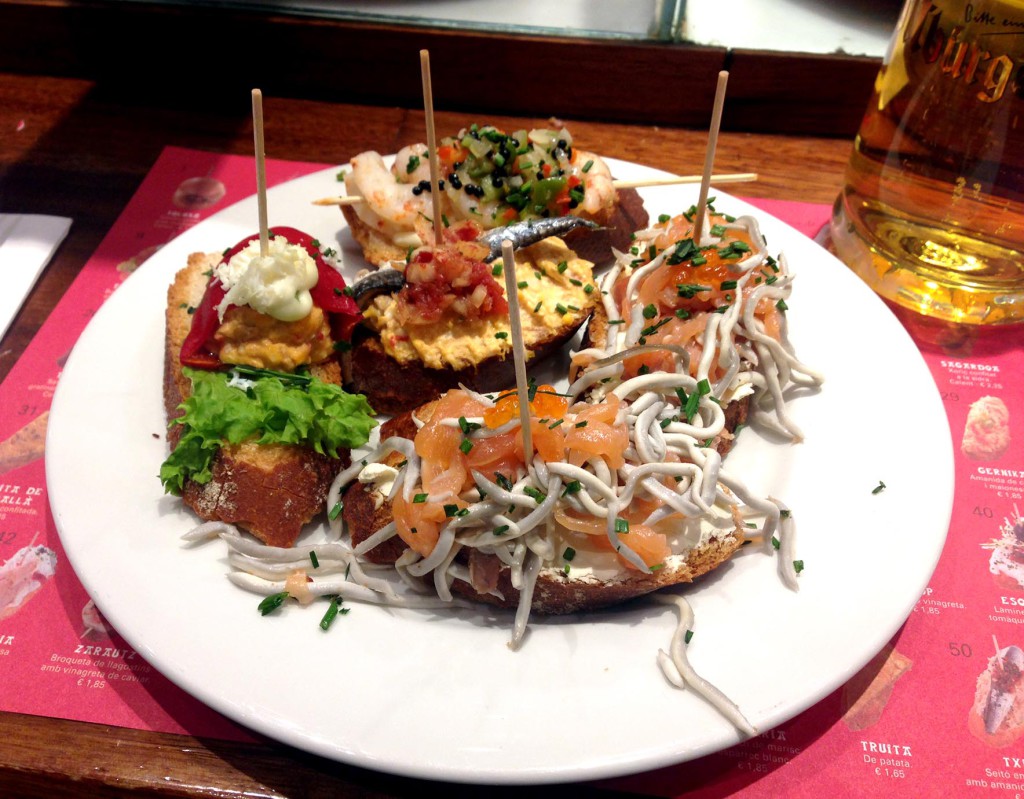 Montaditos del Txapela. Imagination and creativity fused together with the amazing variety of Mediterranean ingredients make tapas a daily must not just for aperitif, but also as a snack or light lunch. Tapas can be found everywhere from real tapas bar to restaurant. Dedicated chain restaurants were created around this tradition.

Markets are not only powerful engines of urban economy and places of local trade, employment and business; they also play a pivotal role in social aggregation and cultural promotion thus contributing to processes of urban renewal. Aware of this, in 1991 the Ajuntament de Barcelona established an independent institution for the direct management and administration of Barcelona markets, the IMMB (Institut Municipal de Mercats de Barcelona). The IMMB is also in charge of the modernization of markets through improvement of infrastructures and personal services, upgrade of the trading offer based on consumers’ requests and promotion of markets as bonding poles and cultural development.

20 markets have been renovated in the last 10 years with an investment of over 150 million Euros. The market of Santa Caterina is an example of the most successful work of renovation, the first indoor market of the city built in 1848 and renovated by Miralles and Tagliabue, who designed the “fifth wall” (the roof) as a pop art composition, realized with multicolor tiles. The idea was to recall the multitude of colors of fruit and vegetables sold in the market. Nowadays, the Market of Santa Caterina has become an icon of the contemporary urban sightseeing of Barcelona (bar a tapas and Cuines Santa Catarina restaurant are worth of a visit). 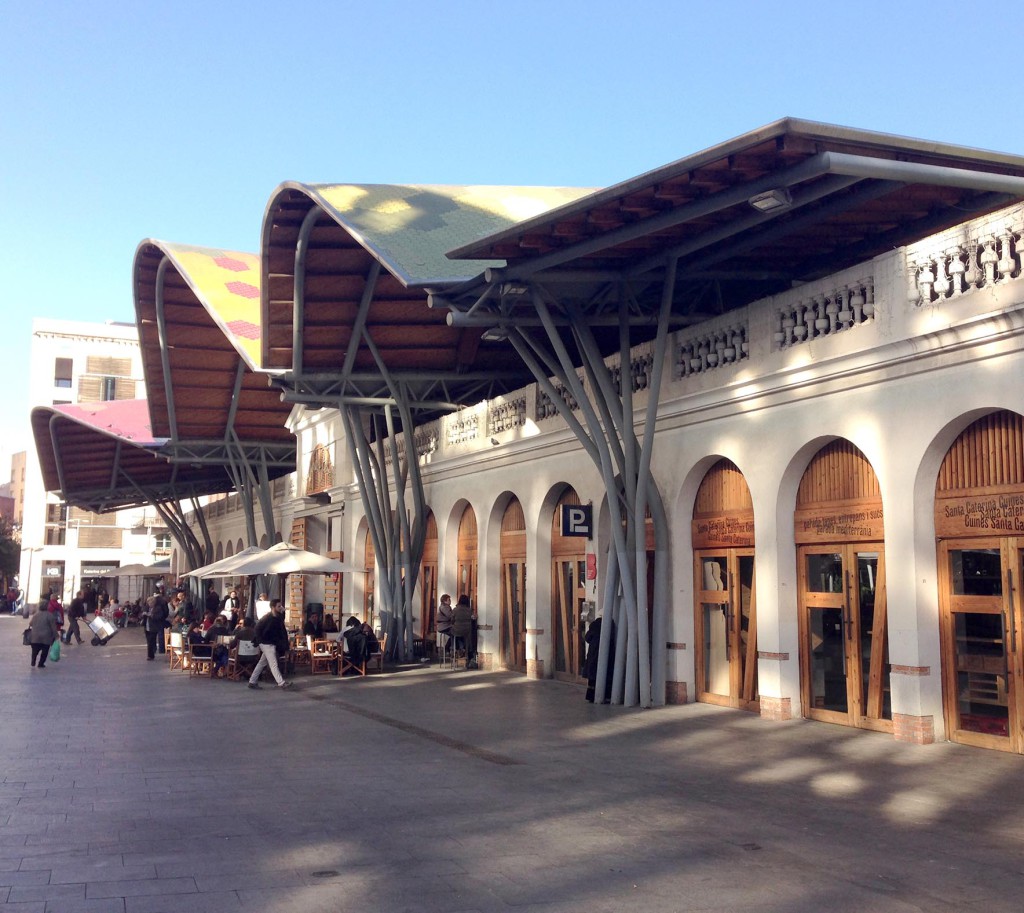 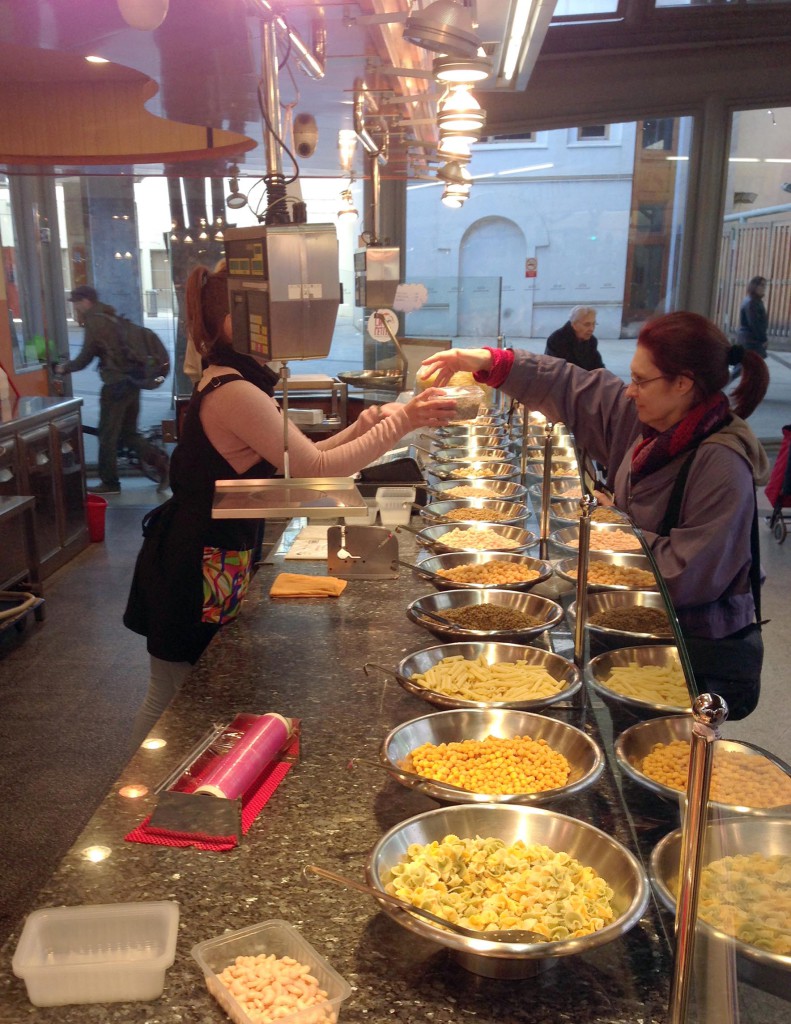 The Santa Caterina Market, with its newly renovated structures and services and modernized with the roof by Miralles and Tagliabue, is one of the most lively and frequented places of historical center.

An example of a different kind of urban renovation is the Market of Born, built with glass and iron infrastructures dated back to the end of the Ninetieth century: exhausted of its commercial function, in 2013 the market enjoyed a second birth thanks to the project made by Enric Sòria e Rafael de Càceres. Flaunting its brand new name, the Born Centre Cultural now is an exhibition center with bars and bookshops mainly hinged on the promotion of the archeological relics of the Eighteenth Century that were discovered during the work of renovation. The market also wants to divulgate historical events regarding the Barcelona siege of 1714 and promote cultural events.

In order to fulfill the variety of goods and to sustain the economy of the traditional offer, the renovated markets have been upgraded with installment of grocery stores that offer prepacked food. (Supermarkets are given the opportunity to allocate inside the areas of the city with the most active commercial activity, in exchange they are asked to provide services and incentive for the maintenance of historical markets). One example is the Market of Ninot, refurbished in 2009. It embodies the new model of urban market promoted by the IMMB; it provides last generation services such as Wi-Fi, tasting areas, the restaurant El Ninot Cuina (an open space kitchen inside the market area characterized by the finest indoor design enriched by prime natural materials derived from wood, metal, glass; it offers a menu with dishes from the traditional Catalan cuisine exclusively made using seasonal biological ingredients). The Ninot’s market also has its own website with a customer service section listing recommended recipes, it offers a two-storey car park for clients, loading/unloading areas, storage/disposal of waste. Special attention is paid to the development of the energetic efficiency of the building. 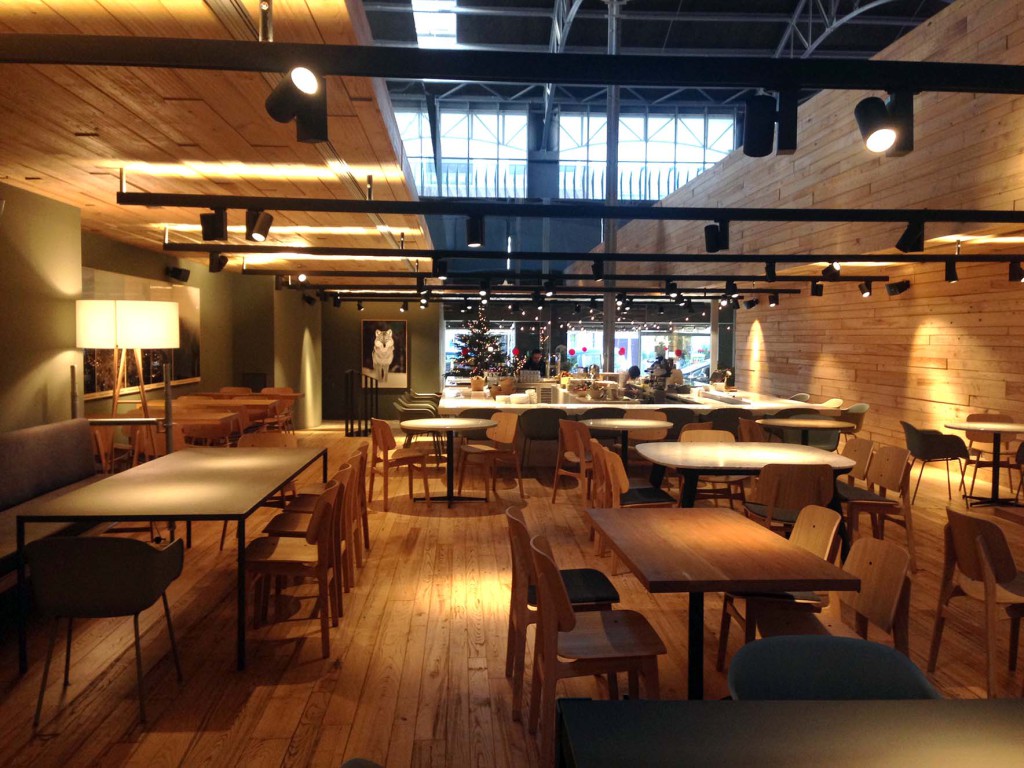 The Ninot’s Mercat, completely renovated in 2009, with sales desks on the ground floor, a supermarket downstairs and the restaurant El Ninot with open kitchen Cuina and menu dedicated to traditional Catalan dishes revisited in fresh and modern reissues.

To render last generation markets more appealing, it is necessary to create new and various ways to live and enjoy them. It goes without saying that the most compelling function of markets remains good fresh food, however this does not mean that one goes to the market only for food procurement. Newly refurbished markets must be envisaged as a place for recreational-cultural experiences, as an alternative to the simple lunch break or traditional restaurants. 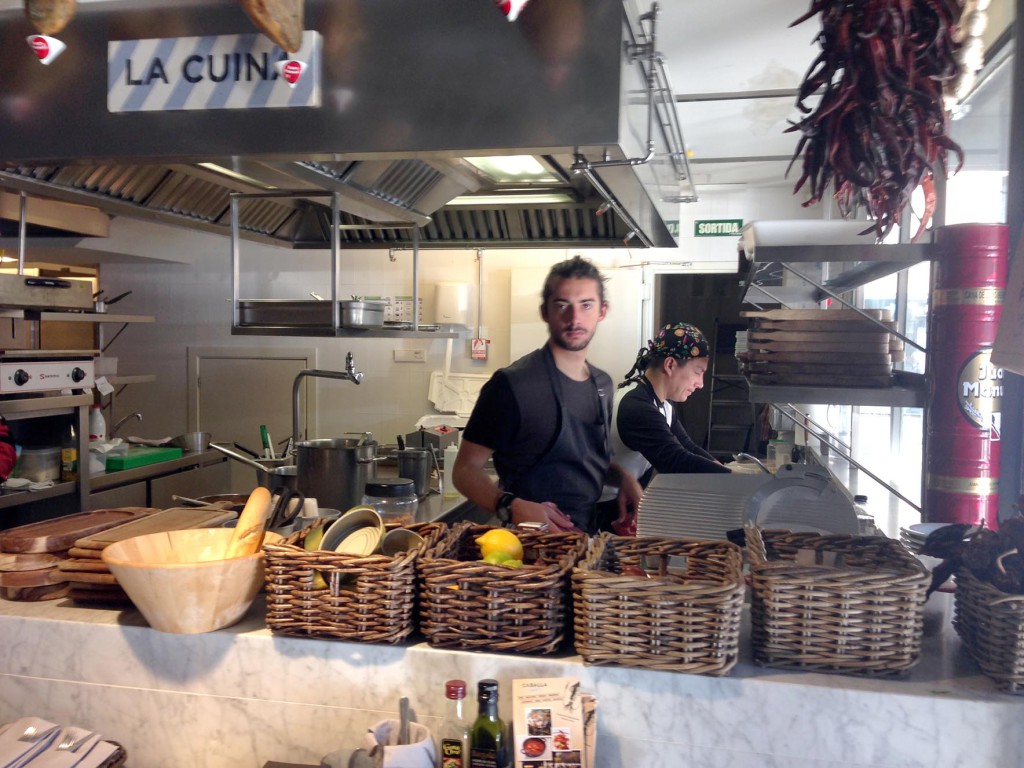 The Caballa Canalla restaurant with open kitchen on the market in the Barceloneta district.

The markets of Barcelona are lively, glorious, gluttonous and joyful places where the energy of trade turns into happiness, where anyone can buy (or eat) something he didn’t know he wanted to buy (…or eat!) and after that gets out of there completely satisfied and not just for the high quality and variety of products found, but mainly for having enjoyed an unexpected adventure … low-cost!

Try “the market experience” at least once in your life, it’s a must, and when you step out of the door don’t forget to check your “level of happiness”!