You have to be placed with radical clarity, the scenario of knowledge of the city and its future. The extensive project of “Naples. Atlas of the historic city”, which have been published so far eight volumes by Editions Oikos (Centro Antico, 2002; Quartieri Bassi ed il Risanamento, 2003; Quartieri Spagnoli e Rione Carità, 2004; Dallo Spirito Santo a Materdei, 2005; Stella-Vergini e Sanità, 2006; San Carlo all’Arena e Sant’Antonio Abate, 2007; Pizzofalcone e le Mortelle, 2011; Chiaia, 2012), goes in this direction and now wants to finally just a cycle, one dedicated to the knowledge of the city, lived for territorial and therefore containers of different shapes and times of his life. Follow other directions of knowledge, “the structure of the city” which will identify the significant stages of its formation through monuments and streets that compose it, in general, have not been examined so far in their unity. It is the most comprehensive ever published on the history, urban form and individual architectures in a single city, and it could be that Naples, the largest and most preserved historical cities in the world that still retains all times and the forms of its ancient construction. At the head of a “research patient”, the Atlas just want to reopen the debate on cultural studies and urban planning on the future of the city and of course is the central relationship between the historic city and the sea, between the mesh consolidated its structure and historical the port infrastructure distributed along its coast. 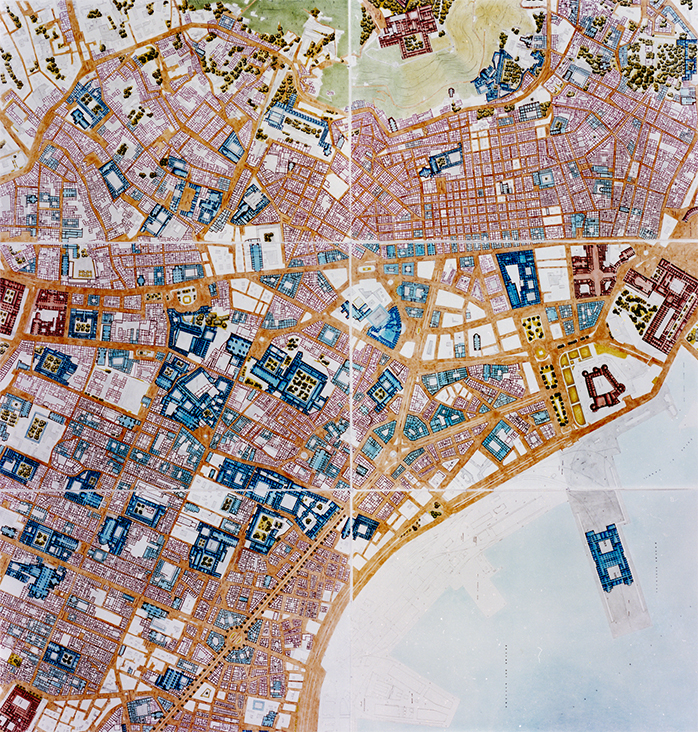 Detail of the Atlas of Historic City of Naples, Expo 1992 of Seville.

This book divides the city into “parts” that can be treated as knowable facts as such, and not just as parts of a whole. The most important thing that drives this work is an idea that knowledge of a city is not possible to reduce it to a few examples. Has anyone done the tourist, knows that this is how a guide for those who do not have time and that is to reduce the city to a few examples, in saying that you look at these examples mean, condense the city. Here is the Atlas does not do this. No condensation in the city a few examples, does even the opposite to be honest, in the sense that it does not start from an ideological position through where it says “… now I’ll show you that there are strange and extraordinary things that you do not know …”. No simply assumes the position of looking at all that there is, namely, to “suspend judgment” and especially “suspend the pre-judgment” that is not an issue and the only one that makes this Atlas of Naples, something had to be done. The Atlas is not the method. It is not an indication to make an atlas to Milan to Genoa to another and so on. You can do it naturally, but have to say that Naples has a feature and then it is no coincidence that the Atlas is born in Naples: Naples feature is that it saves all the time of his transformation. 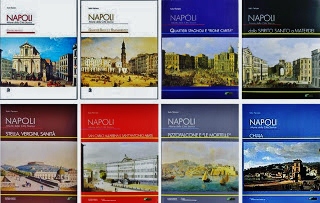 The eight covers of the volumes published so far for the editorial project ” Atlas of the Historic City of Naples”, published by Oikos Editor.

Another important issue and that the Atlas is in charge of the city and therefore does not study architecture, which can be found in the city regardless of the city, so it is organized in a territorial sense. The Atlas does not study the planning of the sixteenth or seventeenth and eighteenth centuries, but volume by volume, research phases to phases of research, its parts: from Centro Antico, Quartieri Bassi-Risanamento, Quartieri Spagnoli and Rione Carità and so on; then study the spatial structure, just the “parts” of the city. 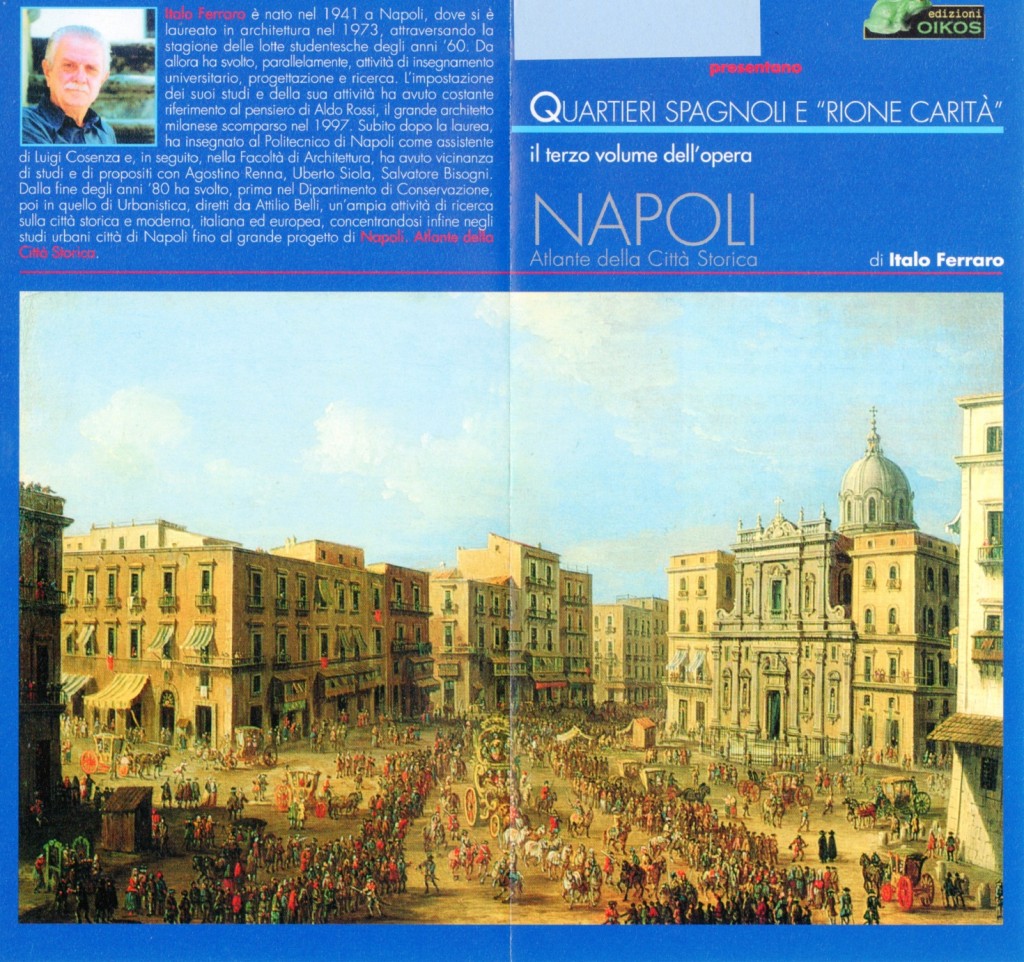 Today, a serious word, is the interruption of intellectual prejudices, and myths about the exceptional nature of the city, both on the myths of the need to modernize it, just to go and study it as it is done in its entirety. Here we could find, if not the exceptionality of Naples performed too and said rhetorically, even in Europe and in the world and also from the political that governs us, by politicians who have governed. Now if there is a singularity of Naples, more than one of his uniqueness is that each party shall respond in some way to a law of this city which is one of the stratification of the plans and the time of his transformation. Today we have the whole problem of expansion of the city and the fact that the boundaries of Naples I do not think they are more easily defined. Certainly that is the central theme is the theme of the territory, then the question is how to Naples can become a point of view to look at the world, rather than the characteristics of the difficult research, which has the city and allow to drain within himself the complexity of the world. The Atlas is linked to the very purpose of a speech on time, but not at issue, but the need for a project for the city, promoting the proposal to draft a new “city card”. The City of Naples had great merit in this direction because between 1872 and 1880, drafted a charter extraordinary in scale 1:2000 and drew up before there were the great transformation of cleansing, due to a particular political conjuncture of course economic was determined at that stage.

Now you do not see an explicit statement to the doors of the project, while you feel a desire to project the words of many, but there is also the belief that we are in an era of such transformations that we will encounter in transformation projects. So the Atlas in his final stages of the publishing project has to draw up and publish a map of the entire historical city, in sheets at 1:2000 scale, such as the ‘800 which of course had already been preceded by the Carta of the Duca of Noja, which is instead the eighteenth century. 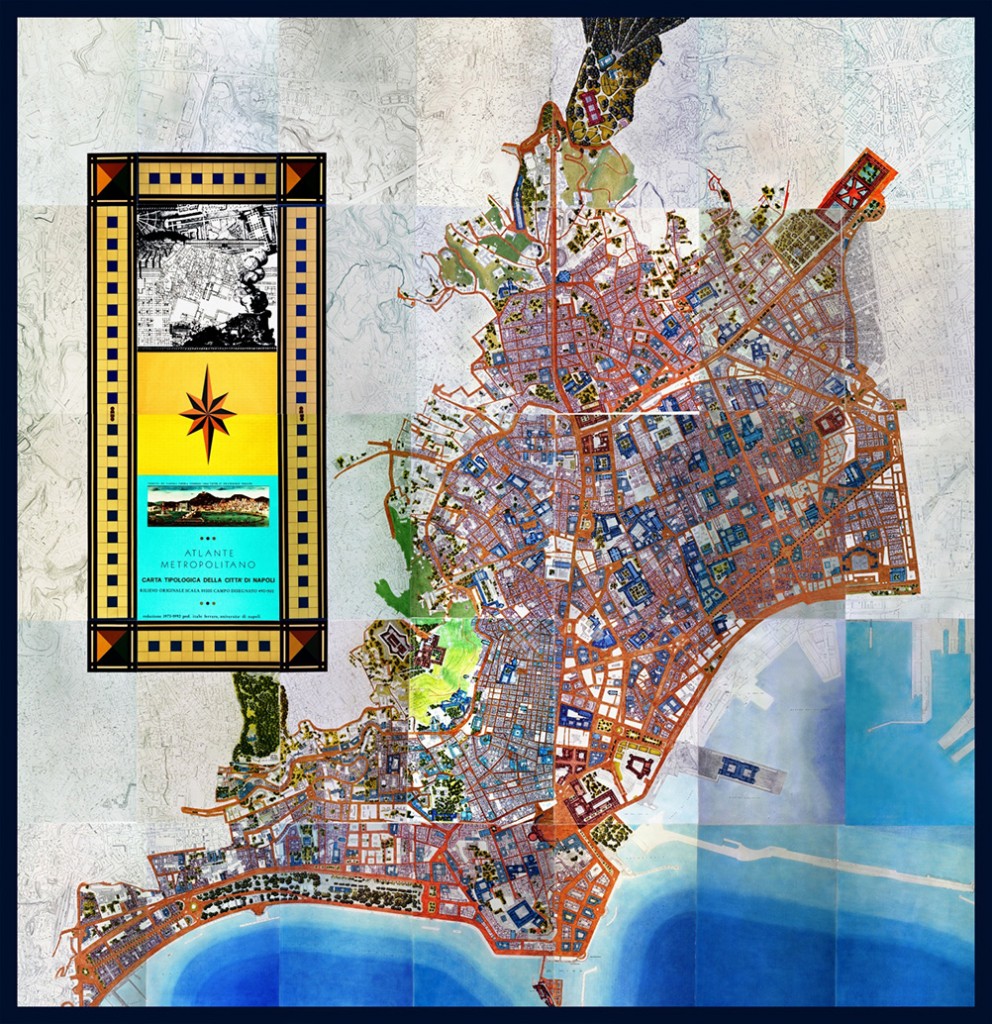 Overview of the entire Historic Center of Naples consists of 35 panels, drawn up on the occasion of the exhibition ” Atlas of the Historic City of Naples”, Expo 1992 of Seville.

The cards are tools heroic, because parts of the city feel of something that is going to change, so even a death, not of a death foretold, but something that is inevitable, we cannot avoid. So here is the question of the draft today and the issue of the Atlas, all in all it boils down to a matter and that we try to reduce as much as possible the subjective aspect, to make the project a legitimate, indeed to “establish it”, not because we fear of the subjective, but we fear that a subjective urge, as has been progressively in the second half of the twentieth century, to prevail on the merits of the project. 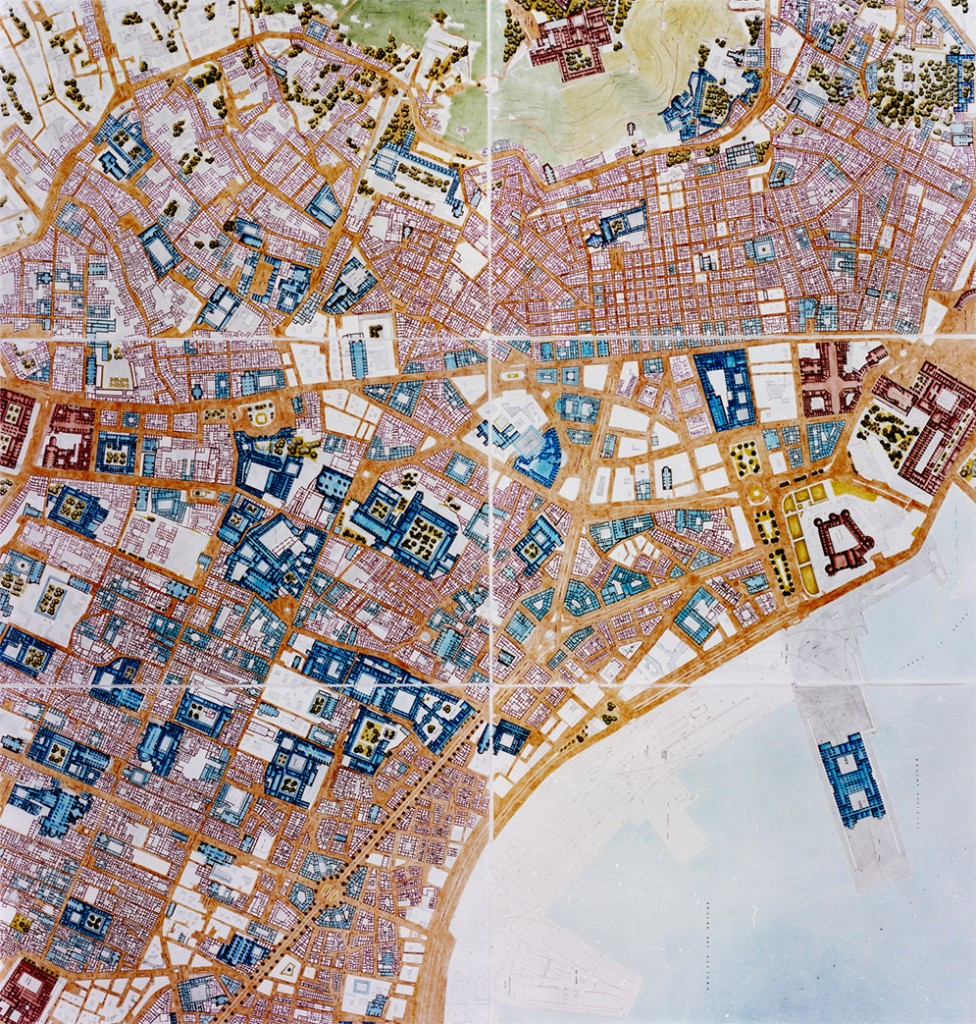 Detail of the Atlas of Historic City of Naples, Expo 1992 of Seville.

For these reasons, the court finds that any intervention in the port of Naples or otherwise relating to the transformations on the urban coast, should refer to the knowledge of what is going to transform, in understanding the close relationship, not only within the relationship city-sea, but more generally with other similar cities, which have gone through the same transformation laws. Maybe we are not as important to note that individual interventions along the coast or within the urban waterfront, but most important thing is to find the connections that have formed strong structural and functional relationships with the old urban structure. Try to work on the existing building structure with surgical grafts urban vertical and perpendicular to the coast. From this point of view, for example, might find Naples, an reborn his identity by connecting with a more effective urban mobility policy, the pole with the axis of Capodimonte-Toledo to Via Cesario Console (Piazza del Plebiscito) or connect the top the fortress of Castel Sant ‘Elmo with the dense urban fabric that stretches along the hill of San Martino to the sea of Via Caracciolo, crossing the Villa Comunale, then throw on the large terrace overlooking the sea, commonly called the promenade of the “Lungomare”.

The knowledge and the study of urban phenomena allow us to define a strategy with conviction complex and articulated like this, throwing away a vulgar politics of the day-to-day emergencies or the chase continued. The Atlas is a fundamental tool to embrace this new policy and the place to open a large local and international comparison so that we can give effective answers to the height of our “time “.

Head image: Picture of the poster on the Atlas of Historic City of Naples on display at the Expo 1992 of Seville.

Article reference for citation: Ferraro Italo, “The Atlas of the Historic City of Naples: a tool for knowledge to understand the city and its relationship with the sea”, PORTUS: the online magazine of RETE, n.27, May 2014, Year XIV, Venice, RETE Publisher, ISSN 2282-5789 URL: https://www.portusonline.org/the-atlas-of-the-historic-city-of-naples-a-tool-for-knowledge-to-understand-the-city-and-its-relationship-with-the-sea/

The extensive of "Naples. Atlas of the historical city” project opens the debate on cultural studies and urban planning of the future of the city. The characterizing feature of Naples is that it conserves all the times of its transformations. The "city" is not a generic thing. One must consider its development, its stratification and the ability to see inside and the evolution of the city. We must restrict the study of the city to a specific point of view and to do this in great cultural honesty, this allows us to connect with those who adopt different points of view. You must use a "time" of suspension to redefine a point of view as much as possible. The theme that is central is that of the region and its expansion. You have to make legitimate project , just to "establish it", not because we are afraid of the subjective, but to highlight the merits of the project. The port area of Naples can be a workshop for this project.