The city of Aveiro has undergone several physical changes throughout the centuries. In the 18th century the volatile maritime currents and the change in the flow led to the successive closing of the seaside, which caused problems in the connection between the urban area and the sea (Arroteia, 1998). These changes to the navigation, based on the constant alteration of the bar due to erosion, propelled at the time various development and rupture crisis in the city of Aveiro (Gaspar, 1983:92).

Throughout the 18th century the silting of the bar and its moving South created a distance between Aveiro and the sea, thus making navigation precarious, which contributed to the decadence of the harbour.

This location currently conditions the development of the Harbour, given the fact that the characteristics of the access canal limit the size of the ships to ten meters draught [1] and two hundred meters long, thus making anchorage impossible to bigger ships. Figure below represents the hydrography of the access canal to the Harbour of Aveiro, on which it is visible the canal has areas which are -13,20 meters deep and the width between the north and south moles is quite diminished regarding the entry of ships bearing a draught larger than -10 meters.

The restriction on draught and size of the ships block the development of the Harbour of Aveiro if compared to other Portuguese harbours, namely in what concerns cargo and passenger transportation (cruises). It is relevant to highlight that limitation blocks the transportation of people and goods to other continents, the Harbour of Aveiro being thus directed to the destinations such as Europe and Africa, that given the profitability of the maritime transportation to other continents is associated to bigger ships and larger draught.

The overcoming of this limitation must imply a partial cut of the south mole and dredging of the access canal between both moles, so as to allow an increase in the depth of the canal. That is the only possibility for bigger ships to have access to the Harbour of Aveiro, allowing cargo transportation to other continents (as Asia or America.

Hydrographic map of the entry bar to the Harbour of Aveiro. (Source: APA, 2015)

Throughout time the harbour adapted to the changes in the surroundings, such as the start of various industries. Especially due to the presence of chemical industries, the harbour gradually grew in terms of package cargo to the detriment of container cargo.

Currently, due to the greater presence of industrial liquid and solid bulk, the transportation of container cargo is conditioned by the manufacture’s lack of specialisation in this sort of cargo. Access of ships to the harbour is also conditioned by the draught and size of the vessels.

Notwithstanding, there is a project for a new container platform interconnected to 12 railway lines departing from the platform and destined to the European hinterland.

The Centre Region of Portugal works as the natural hinterland [2] of the Aveiro Harbour, for which this territory has the greatest influence on the activity of the port infrastructure as well as it is also the most influenced region by the maritime Harbour of Aveiro.

Nonetheless, there is no air connection but for the military aerodrome at the Base of S. Jacinto, whose purpose is limited to military and INEM [3] use.

However, this region presents an infrastructure deficit which may favour a multimodal transportation connection. Thus, the inexistence of a regional airport active in the transportation of people and goods, contributes to the undergrowth of the intermodality of transportation.This intermodality might purvey for the balanced development, sharing the costs per the various industrial clusters,[4] which are developed in the surroundings of the several transportation companies, as a support to them.

The interrelation of the regions may be a vantage point in favour of the Centre Region (NUT II), by means of the development of the Region of Baixo Vouga (NUT III), by having the Harbour of Aveiro as an anchor for the development of surrounding Regions, namely that of North Beira Interior (NUT III). In the scope of the Centre Region territorial area, Guarda, as part of the same territory, may contribute to the development of the Centre Region and the Harbour of Aveiro, through the current construction of the Enterprise Initiative Logistical Platform of Guarda (PLIE). Given it is a transborder platform and the connection to the Harbour of Aveiro being made by A25 and the Beira Alta line, both infrastructures shall contribute to the enforcement of the maritime connection and other means of transportation, namely land.

The Centre Region of Portugal currently presents a dynamic and diversified economic network, benefiting from the presence of the University of Aveiro which holds a very important highlighted status in the local, regional, national and international development within the areas of technology and environment. These areas allied to the existent transportation infrastructures make the Centre Region, namely the Baixo Vouga Region, an attractive business area, which contributes to the economic and social development of this territory. 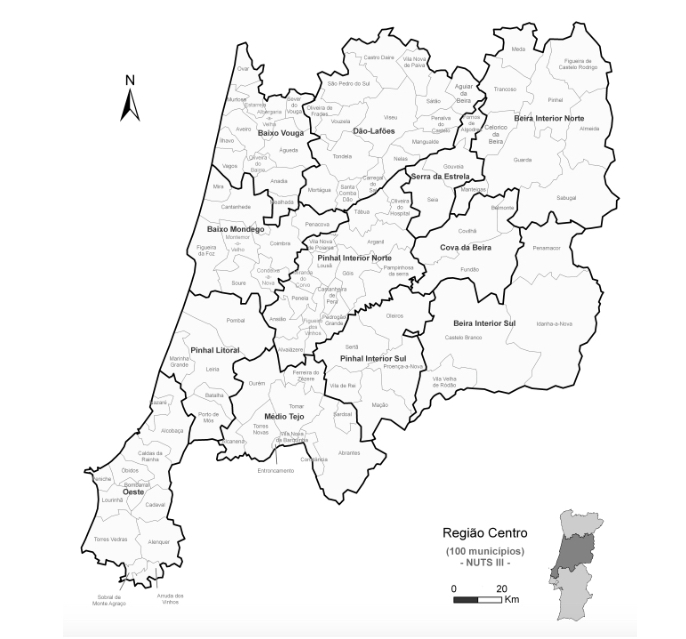 In this scope, the University of Aveiro contributes to the development of companies in the fields of telecommunication and computation, namely PT Inovação and SAPO, whose company headquarters are set in the city of Aveiro. The technology developed in these companies may be applied to the intermodal transportation, namely at the Harbour of Aveiro, given the fact that – as argued by Castells (2011:529) “(…) an optical fibre telecommunication system, (…) for the internal and worldwide connection via land and mobile lines. (…) five new airports being built (…) new harbours being built (…) creating the biggest port capacity of a region, in the entire world” – communication and Internet developed by PT and SAPO may be applied to the management of logistics and communication at Harbours.

Apart from the cargo ships anchored at the Harbour of Aveiro, this may be used as an anchorage for cruise ships in the South Terminal. Given that the Harbour is already served by a railway connecting Porto-City, a view which may contribute to the economic development of the city of Aveiro, by means of the tourism advertising that cruises usually offer.

The tourism which may outcome from the Cruises at the Harbour of Aveiro does not environmentally interfere with the city, considering the distance between the Harbour and the city. It shall contribute to the cultural, social and economic development of the city of Aveiro and of surrounding cities (such as Ílhavo) for it shall propel a greater number of visits to the cities, notwithstanding short lasting, given the fact that tourists have accommodation on board. However, consumption of goods and services during the day propels an economic stimulus for the city, for which these must be reinforced and enlarged to the services connected to cultural, gastronomic and beach related services. 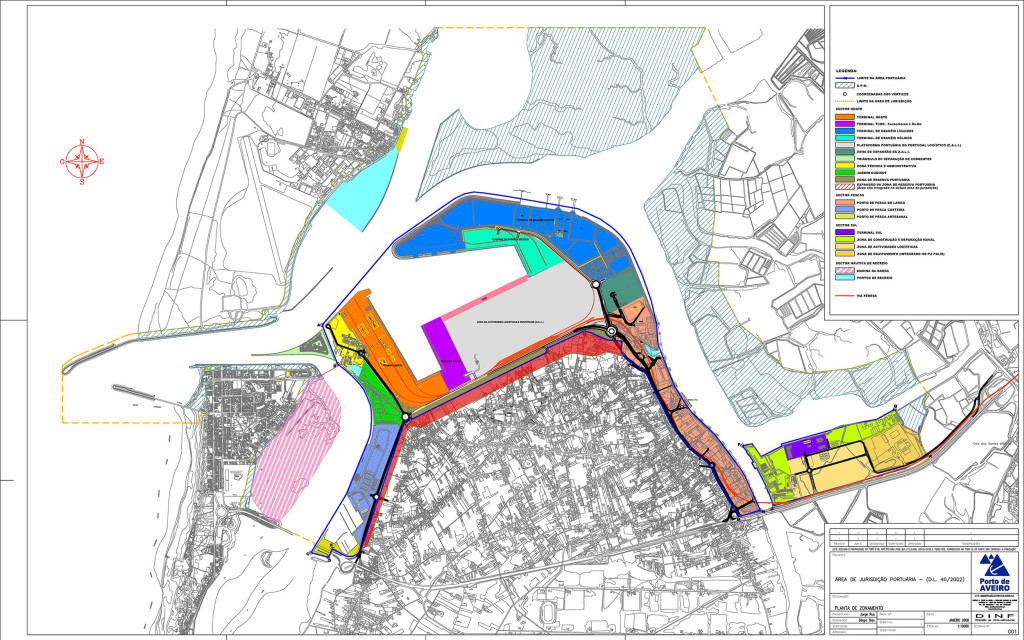 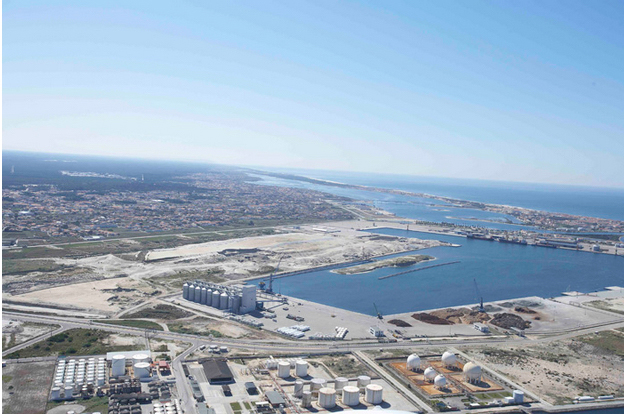 The key questions in this article are as follows (Table 1):

Clusters are especially important for maritime domain because port and navigation industries depend on various specialised services (De Langen, 2002; Wijnolst,2006). Companies which participate in maritime cluster are asked a growing productivity by means of incentive which sets on price reduction and connection between suppliers and clients (Brett & Roe, 2010).

The success of maritime clusters contributes for the positive development of harbours and its surroundings. The maritime cluster consists of “all economic activities related to the arrival of goods and vessels” (De Langen, 2004:85). The first subsector of any maritime cluster is its harbour.

The amount of urbanistic interventions, functional and environmental regeneration, inherent to the waterfront has increased in the last few years.

At the edges of the population centers, the reacquisition of large costal collective (or public) areas may be performed offering in such a way spaces for leisure and social and cultural activities. These are areas which operate as central axis including public sidewalks, restaurants and leisure (beaches, sports and culture) (Portas,1999).

The development of the harbour – waterfront connection may embody an opportunity to create a new image for the city and the region.

The new waterfront shall motivate people to enjoy the coast and to share time with residents and tourists (Millspaugh, 2001). Various measures and instruments have been applied to a great part of the waterfront development throughout the last decades, covers  its location marketing (being near water, marine, fishing, aquarium) applied tourism to the harbour (cruise Terminal), creating a maritime cultural heritage (preservation of the historical heritage) and organisation of great events which may attract residents and tourists.

The South terminal of the Harbour of Aveiro is the one which should have been turned into a leisure area as the above examples in various world harbours, namely Puerto Madero, Barcelona, Bilbao, Hamburg and San Francisco. The territorial area of the south terminal would provide a connection between the harbour and the urban centres of the cities of Aveiro, Ílhavo and Gafanha da Nazaré. 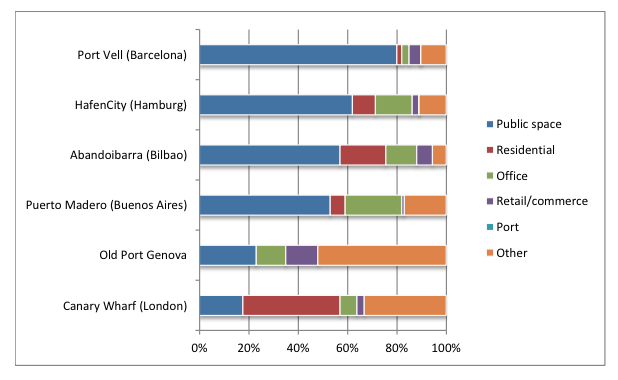 [1] The draught of a ship is the name given to the lowest point of the vessel, which is measured vertically from a point at its external surface.

[2] Geographic area of a port city which, concentrating a considerable economic activity, may create an urban network composed of small urban centres.

[4] Clusters are interconnected companies agglomerations, as they have similar features and are located in the same territory. This concentration maximices information exchanges.

Brett, V. & Roe, M. (2010), The potential for the clustering of the maritime transport sector in the Greater Dublin Region, Maritime Policy & Management, 37(1), Routledge.

De Langen, P. W. (2002), Clustering and performance: the case of maritime clustering in The Netherlands, Maritime Policy and Management, 29 (3), Routledge.

Salvador, M. R. (2014), Maritime Clusters Evolution. The (not so) Strange Case of the Portuguese

Brett, V. & Roe, M. (2010), The potential for the clustering of the maritime transport sector in the Greater Dublin Region, Maritime Policy & Management, 37(1), Routledge.

De Langen, P. W. (2002), Clustering and performance: the case of maritime clustering in The Netherlands, Maritime Policy and Management, 29 (3), Routledge.

Salvador, M. R. (2014), Maritime Clusters Evolution. The (not so) Strange Case of the Portuguese

The Centre Region of Portugal works as the natural hinterland of the Harbour of Aveiro, for which this territory has the greatest influence on the activity of the port infrastructure as well as it is also the most influenced region by the maritime Harbour of Aveiro. The Centre Region as conveyed by its name is the most central of the Portuguese country, holding an essential geostrategic characteristic in comparison with the two major Portuguese metropolitan areas: Porto and Lisbon. The Harbour of Aveiro is geostrategically located to support the development of short distance maritime transportation, namely European maritime Routes.