The territorial understanding is a complex and exciting task, especially in remarkable historical load regions. In any littoral scenario, and specifically as regards the Mediterranean, you cannot separate the mainland from maritime realities. Both have woven a system of cities and ports which represented the basis of a common culture. This base meant the starting point of a territorial balance that has remained long. A progressive deterioration of these relationships has defined a transitional current situation. 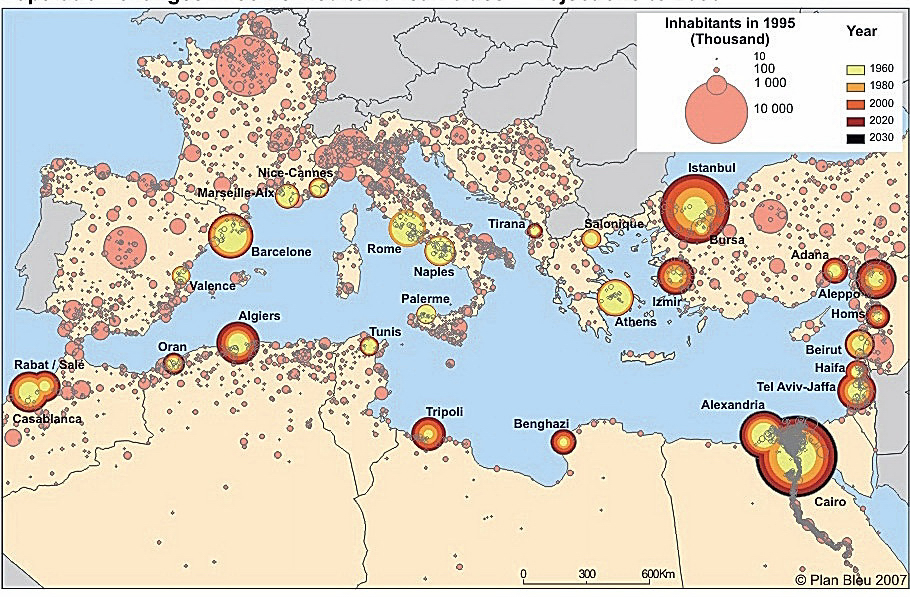 A major territorial imbalance have been triggered by increasing maritime traffic [3] and more specifically the respective specializations, along with decreased piscatorial activity (fig.2).Tourism, container port traffic and limited fishing are the triad for this situation.

The current dynamic is set on two levels. For one, greater scale city-ports establish territorial competition among them with their own resources. Its control may be as necessary as important [4]. The struggle to monopolize larger market shares may lead to situations difficult to sustain in other less favorable socio-economic scenarios. In fact this situation is already suffering in other sectors, to have been a voracious urbanization in the northern Mediterranean. Furthermore, we are witnessing a process of degradation of small and medium scale city-ports that fail to interact with any of the topics generating economic activity along the coast [5].

The concept of a geo-strategic unit as EUROMED should help articulate as best this competition, especially from a new territorial perspective, not only from a European one. The reconstruction of the Euro-Mediterranean spirit has undergone uncountless vicissitudes. The Barcelona process, criticized by some, [6] excited through a stage where the Union for the Mediterranean [7] (UfM) seems to rise from the early season ashes. The major activity of its Transport and Urban Development Division [8] prior assessment of the work to be called to the various programs financed by European cooperation is vital to understand the many possibilities that this new geostrategic alchemy can bring.

The Arab spring need of funds to help support certain structures. The city and the port, as symbols of the UfM’s Division, are called to engage in greater and getting so more opportunities to centralize efforts in that direction. According to Rosa Anna La Rocca, [9] motorways of the sea are not just a matter of water, but of land, sometimes a lot of land.

The complex view of the problem should lead to new solutions to stop exporting to South Mediterranean development models tested so long as failures. This vision must take into account complex Mediterranean urban whereas, which is important for their absolute and relative need of solutions. And they probably will not come from disproportionate action in the same points, but in a scattered and controlled action in the gaps still existing.

This regional approach should not forget the lower levels, ie, the view from the port city, cause and origin of the Mediterranean culture. It should also be the source of a balanced territorial recovery.

The small and intermediate scale city-port attends a process of obsolescence of particular concern when family character / individual tourism does not appear. We focus on Saïda (fig.3) and Famagusta (fig.4), in the eastern Mediterranean, where there are other similar situations. 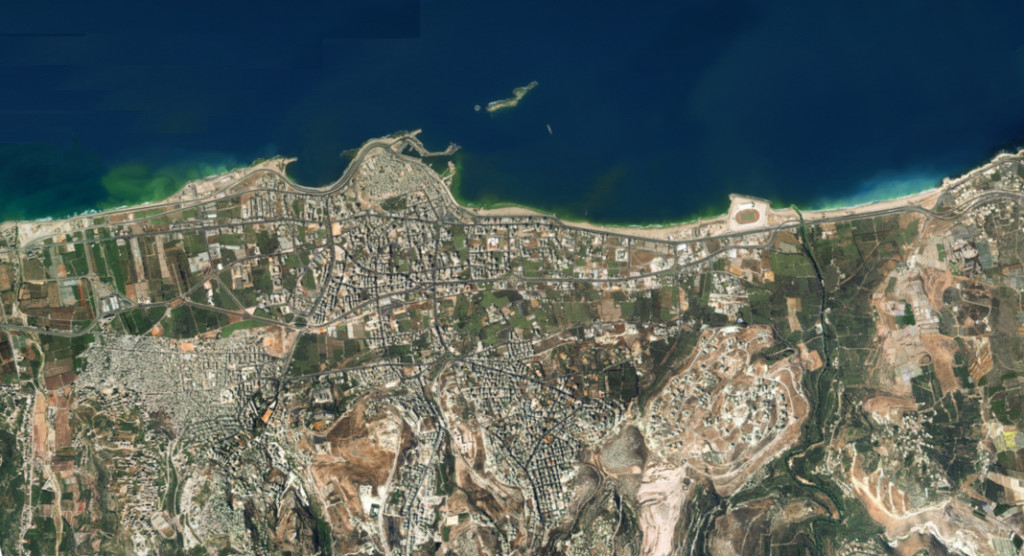 Fishing activity almost disappeared and freights were delocalized to greater scale ports due to commercial or political reasons .These circumstances provoke an opportunity to rethink the new features of the port city. In both cities, interposition of the historical area between the port and the new city generates both similar responses: the historic center attends a rehabilitation process reduced to partial touristic paths, economic base of this area of ??town. Areas not integrated into these paths are attending an uncertain degradation process.

Presence of Palestinian families seems partially rebalance this situation in Saïda, especially next to the inland castle. The whole city is dismembered in terms of the various Palestinian or Lebanese settlements, throughout the entire territory. By contrast, no revitalization of the intramural northern area is perceptible in Famagusta. The absence of gates in this area and it is low accessibility help in this regard. 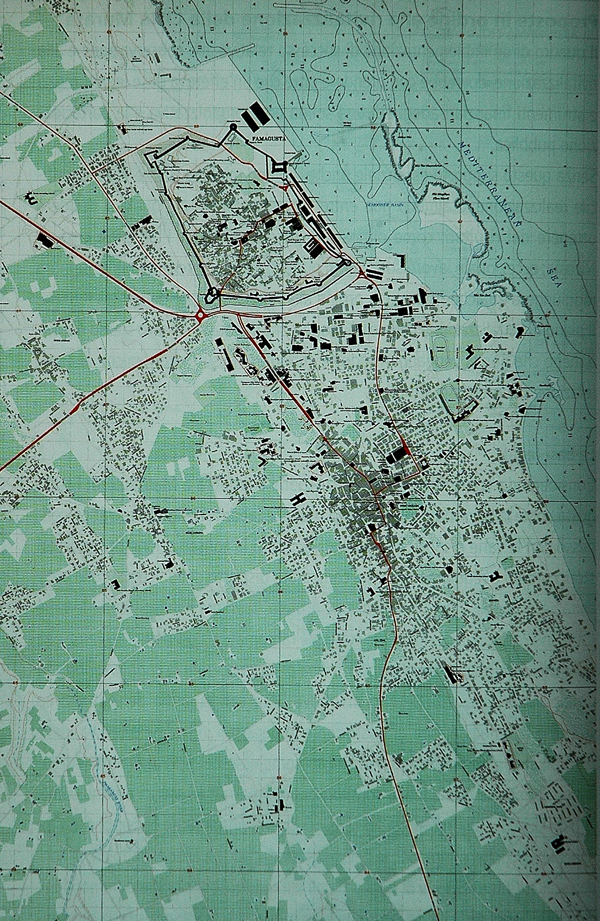 The relationship between city and port in Saïda has been altered by the new high way that separates both areas and has been a significant change in the morphology of the urban water-front. Built destructed elements marked the start of a process of gentrification around the San Jorge Castle (fig.5) .

The port-city relationship is strongly conditioned by the own Famagusta urban morphology. Really the historic city is limited by the existence of the surrounding walls and the formal and functional separation between port and city (fig.6). The political becoming area in turn have caused the presence of a “slum” as in the case of Varosha, a symbol of the persistent conflict in the seventies, which has deeply the existing urban fabric of the city, in its southern sector [10]. 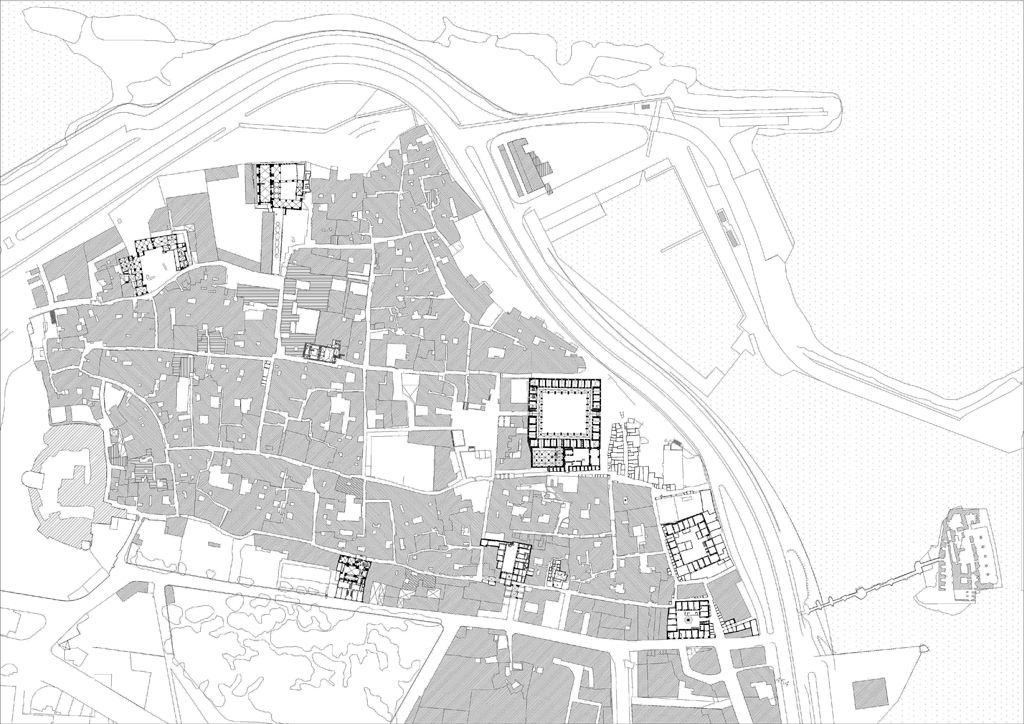 Commercial activity is an important element for supporting for the reestablishment of relations between the port, city and its territory. The Saïda’s souk acts as the backbone of the city, as a link between the historical and the contemporary city. Famagusta market, close to the mosque-cathedral, went on to play other roles, although the axis Limassol – Sea gate. Sea market activity continues to characterize intramural area, more vacationed to tourism.

The potentialities of Saïda and Famagusta are inevitably related to their waterfront or coast-line. In the Lebanese city expectations are focused on southern sector, with a new marina as conventional model. In the case of the Cypriot city, development pressure seems to be much smaller but more signals are detected pre-urban activity with the new municipal auditorium interposition between the current city and the archaeological site of Salamis, in the northern sector.

The university sector can play an important role in urban development. The opening of the Eastern Mediterranean University in Famagusta in 1979 emerged as a dynamic element till now [11] (fig.7). The economical involvement of this institution in the Municipal Auditorium building close to northern beaches is a sign of commitment to urban regeneration territorial relations between city and port. The presence of universities in Saïda is not so visible, but it can be a regeneration factor in the future.

Any considerations around both cities, except their specificities, can serve as the first reference to a discussion that allows developing common strategies to a widespread problem. Reflection developed within the WaRe project [12] can be used for its generalization in the Mediterranean basin [13].

The Euro-Mediterranean identity necessarily involves port network recovery. [14]  And this network should encourage dual scale synthesis that look twice the territory referred to above: the globally competitive ports [15], and ports of medium and small-scale territorial real engines from immemorial times.

We ask ourselves what is actually today the sea. We cannot live only in the past. This concept is to reinvent and redefine the relationship between city and port. The role of port authorities is emptied on these scales, but jurisdictional disputes between port and city are still valid.

Of this balance, double those eyes, those aquatic and terrestrial issues, depends much of the future of this region.

The paper tries to introduce a brief vision about the relations between Mediterranean cities and port, from geo-political economical and territorial points of view. This discourse starts from the reflection about the great problems are converging in this space, emphasizing in the medium sized scale port cities area being studied, as Famagusta and Saïda. Both cases study ports’ roles facing to the integral regeneration are evaluated. Guidelines for this regeneration are defined, paying special attention to the urban redesign of the relations between cities and ports and the implementation of the touristic and high education infrastructures.