Although Denmark is part of Europe, when viewed from the point of view of physical geography, its DNA is 100% Scandinavian!

Copenhagen, Aalborg and Århus are “liquid cities” like Stockholm, Oslo, Helsinki. The common identity uniting these cities has been forged by their centuries-old relationship with the North Sea, their main means of communication and commerce as well as a generous source of food.

Even though they are far from each other, these cities continually exchange synapses, sharing information and innovations. This is how, over time, a common culture was formed that today is unequivocally referred to as Scandinavian.

As has become our custom, we will focus on the culinary aspects of this culture, identifying some that have recently surprised the whole world for their capacity for innovation.

We will start with Denmark where, in 2003, a young chef, trained with the likes of Thomas Keller and Ferran Adrià, decided to open his own restaurant. The choice of location fell to an old abandoned warehouse dating back to 1766 on the island of Christianshavn in Copenhagen, the North Atlantic House. The building, which served as a warehouse for dried fish, salted herring, whale oil and Nordic game skins, was close to the Grønlandske Handels Plads, the historic centre of trade with the Faroe Islands, Finland, the Iceland and Greenland.

So it was that this warehouse, imbued with centuries-old hints of fish and echoes of the intertwined port histories of different Scandinavian countries, became the headquarters of Noma, the multi-starred restaurant rated the best in the world four times. The chef who conceived it, René Redzepi, wanted to trace a new gastronomic path. The essence of his revolution is summed up in the name of his restaurant, which is a portmanteau of the words Nordisk and Mad (Nordic Cuisine). 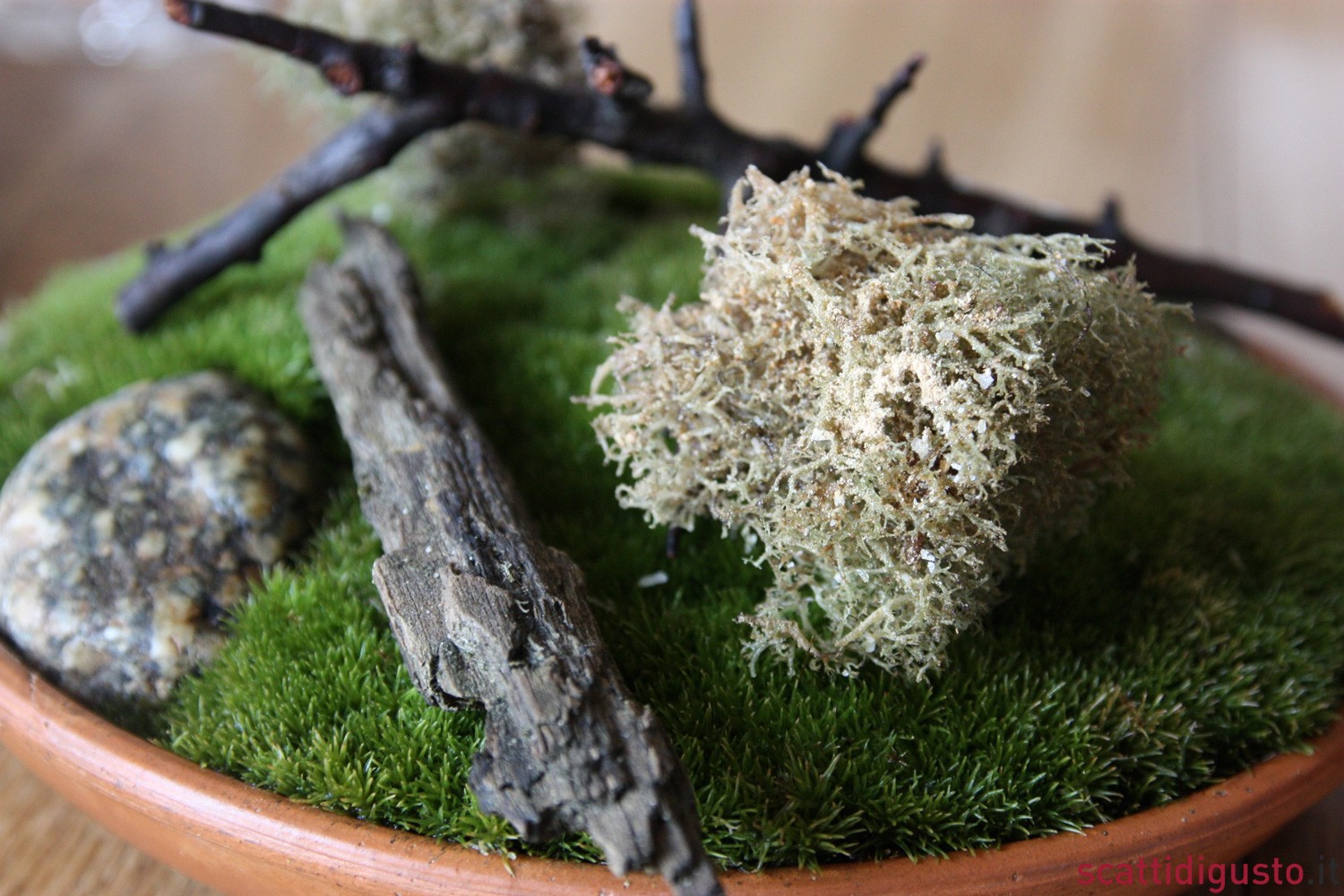 One of the dishes of Noma, Moss dried with mushroom powder, which is inspired by the mimesis of nature. (Source: https://www.scattidigusto.it/wp-content/uploads/2011/09/Noma-ristorante-03-muschio.jpg; accessed on 16/04/2021).

An interesting article by Francesco Mangiapane positions the change led by the so-called New Nordic Cuisine movement, inaugurated by Redzepi, as a contemporary attempt to redefine the boundaries of what we eat, or rather a “reinvention” of local tradition, built through aesthetics and semiotics, which is transformed into gastronomic actions. The New Nordic Cuisine could be thought of as an invented tradition, an example of the “translation of tradition” which represents a brilliant alternative to the stale rhetoric of roots and the social and culinary immutability of local traditions. In this case, in front of a peasant culture unaccustomed to experimentation, aesthetic concerns and the pleasures of the table.

The New Nordic Cuisine is, therefore, an identity project that starts from the knowledge and enhancement of local products; it is interested in imitating nature, in the mise-en-place of the spectacle offered by the natural landscape, in the narration, first of all, of the Nordic terroir.

The land becomes the object of exploration through a sort of “tactical” approach which consists of savouring the wild vegetables, fruit, mushrooms, insects, berries, bark and sap spontaneously offered by nature in the different seasons. This ancient practice of foraging, now lost to a suffocating consumerism and standardization of tastes, allows us to rediscover a culinary complexity re-proposed by Redzepi as a hallmark of his culinary philosophy and a practice that immediately became a trend among cooking enthusiasts from all over the world.

Walking and tasting, fighting for food variety, resisting the simplifications induced by a globalized food culture of which the Nordic countries are among the most evident victims, have become the new mantras of the New Nordic Cuisine revolution.

After 15 years of activity, rewarded by a resounding public success, the restaurant was closed to be reborn under the renewed forms of an urban farm for the production of zero-kilometre raw materials. The new headquarters, a former Danish army ammunition depot in the self-governing district of Freetown Christiania, is a successful balance of architecture, agricultural landscape and spontaneous vegetation designed by architect Bjarke Ingels. The restaurant is divided into eleven pavilions in which open kitchens, greenhouses and dining rooms alternate, and it is immersed among the cultivated fields as if it were an ancient Danish agricultural village, in the full spirit of the Edible City. 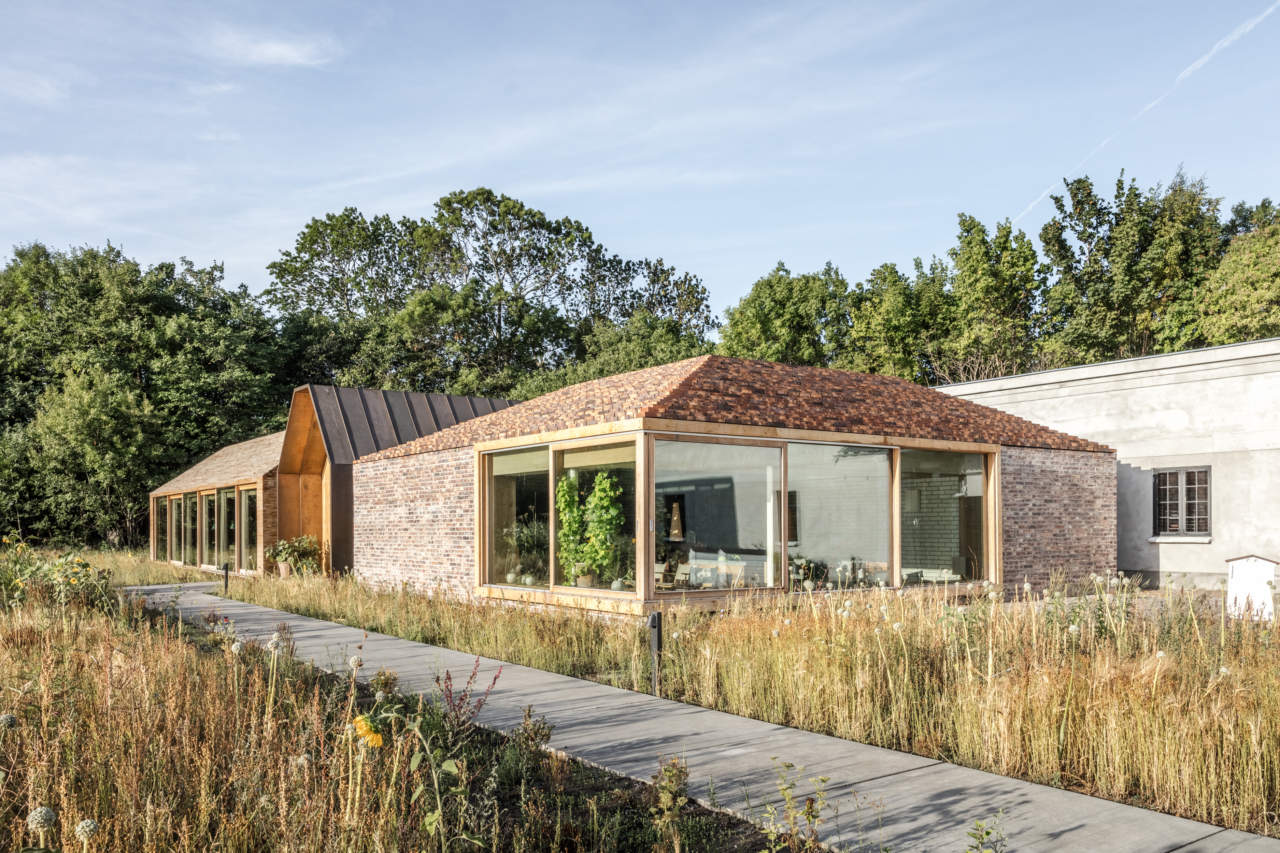 New headquarters of the Noma Restaurant, in district of Freetown Christiania, surrounded by nature. (Source: https://www.area-arch.it/il-nuovo-noma-di-big/; accessed on 16/04/2021). 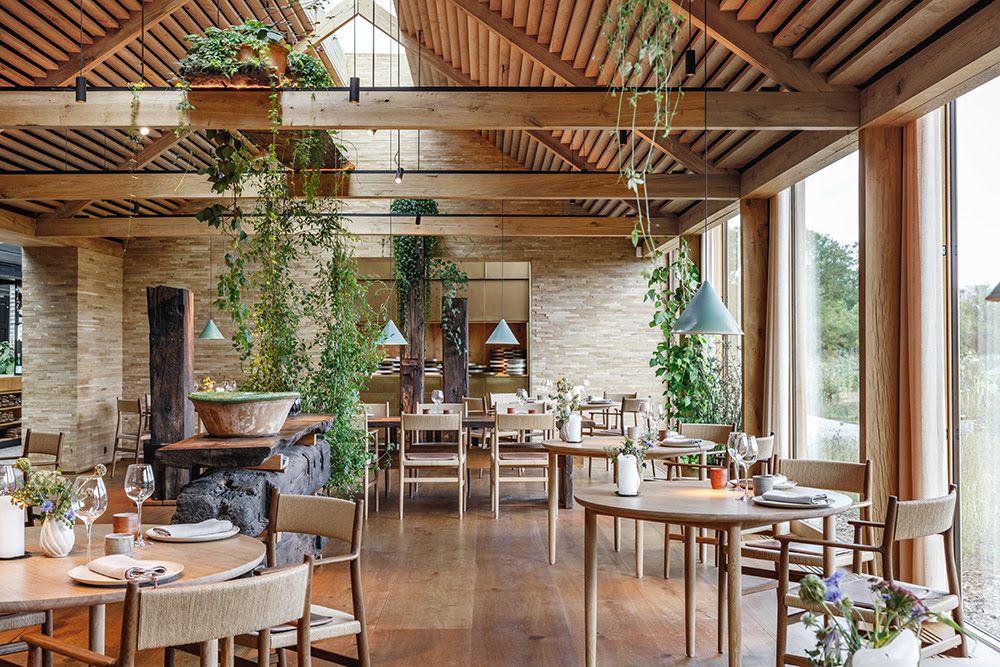 One of the rooms of the Noma Restaurant with furnishings in organic materials and large windows that open onto the natural landscape. (Source: https://www.elledecor.com/it/viaggi/a23329901/nuovo-noma-copenhagen-interni-studio-big/; accessed on 16/04/2021).

The practice of foraging has spread throughout Sweden and has recently been enriched with a new aspect. The need for healthier diets has merged with a proactive approach to individual food supply, encouraged by a nature so generous in wild fruit that it puts the most well-stocked supermarket shelves to shame. Thus, with the support of the government, the national tourism organization Visit Sweden has been promoting The Edible Country programme since 2019, relaunching the Edible City concept on a national scale.

Twenty-three locations have been identified, immersed in spectacular Swedish landscapes – in the middle of the woods, on the shores of a lake, on cliffs washed by the sea or in the middle of the Lappish snows – incredibly suggestive but also full of edible wild vegetables, equipped with wooden tables, some furs to warm up the mood and basic cooking utensils. Thus, was born the largest gourmet restaurant in the world, advertised with the motto “100 million acres of fine do-it-yourself cuisine”.

That’s right: do it yourself! 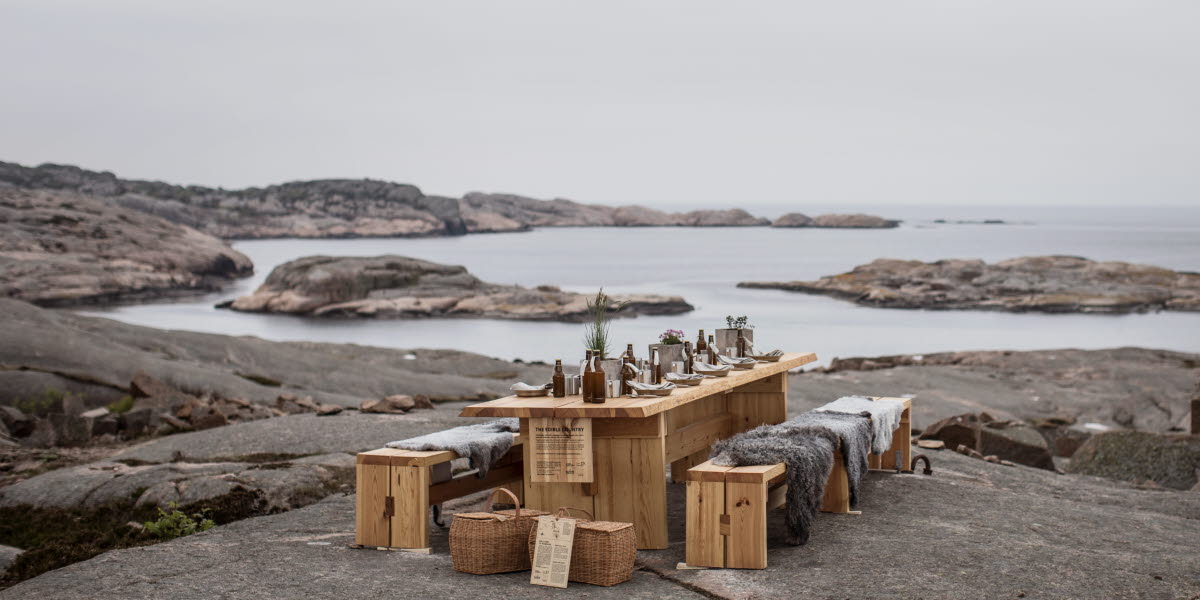 Table set up on the cliff in Ramsvik, West Sweden. (Source: https://www.vastsverige.com/en/ediblecountry/about/; accessed on 16/04/2021). 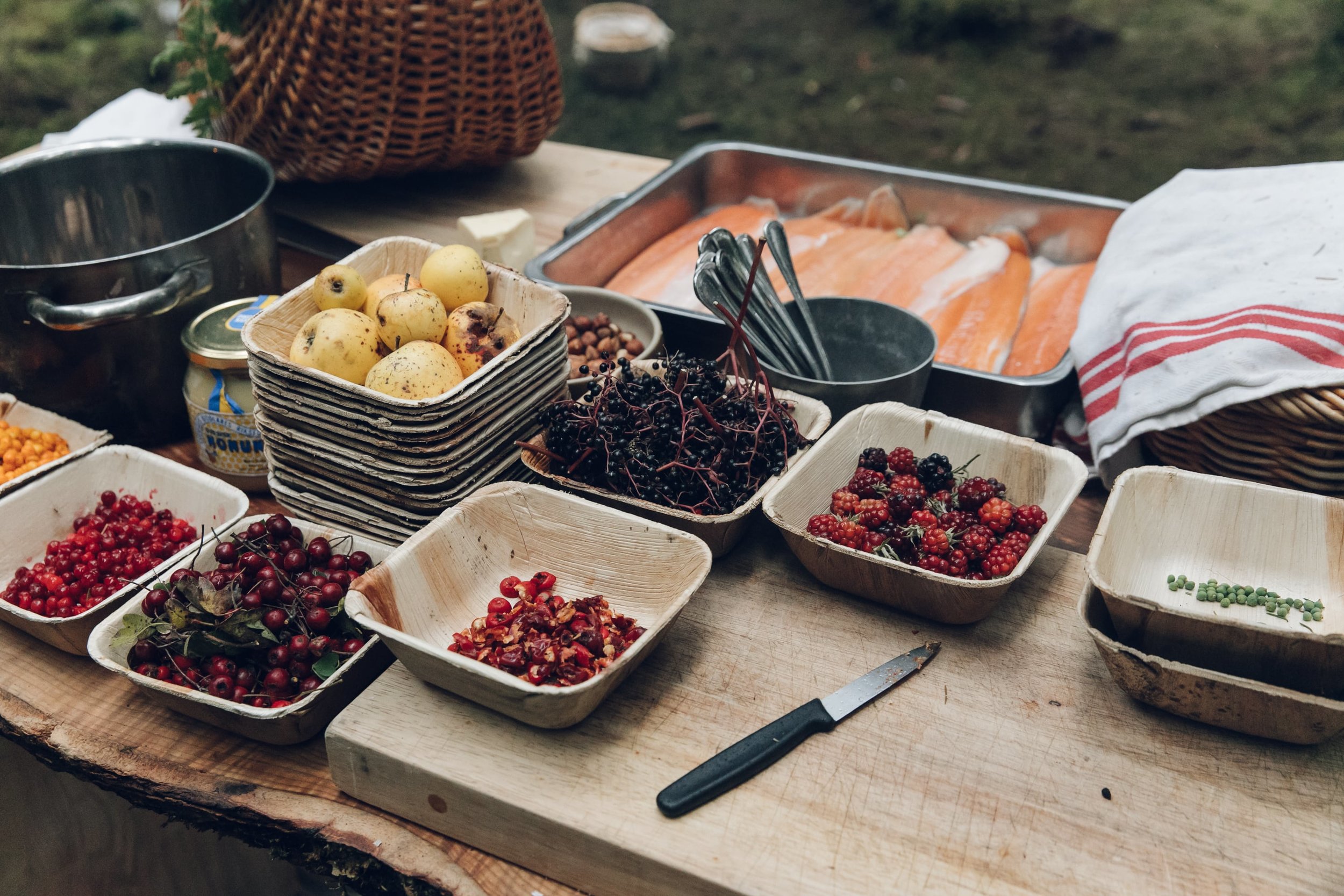 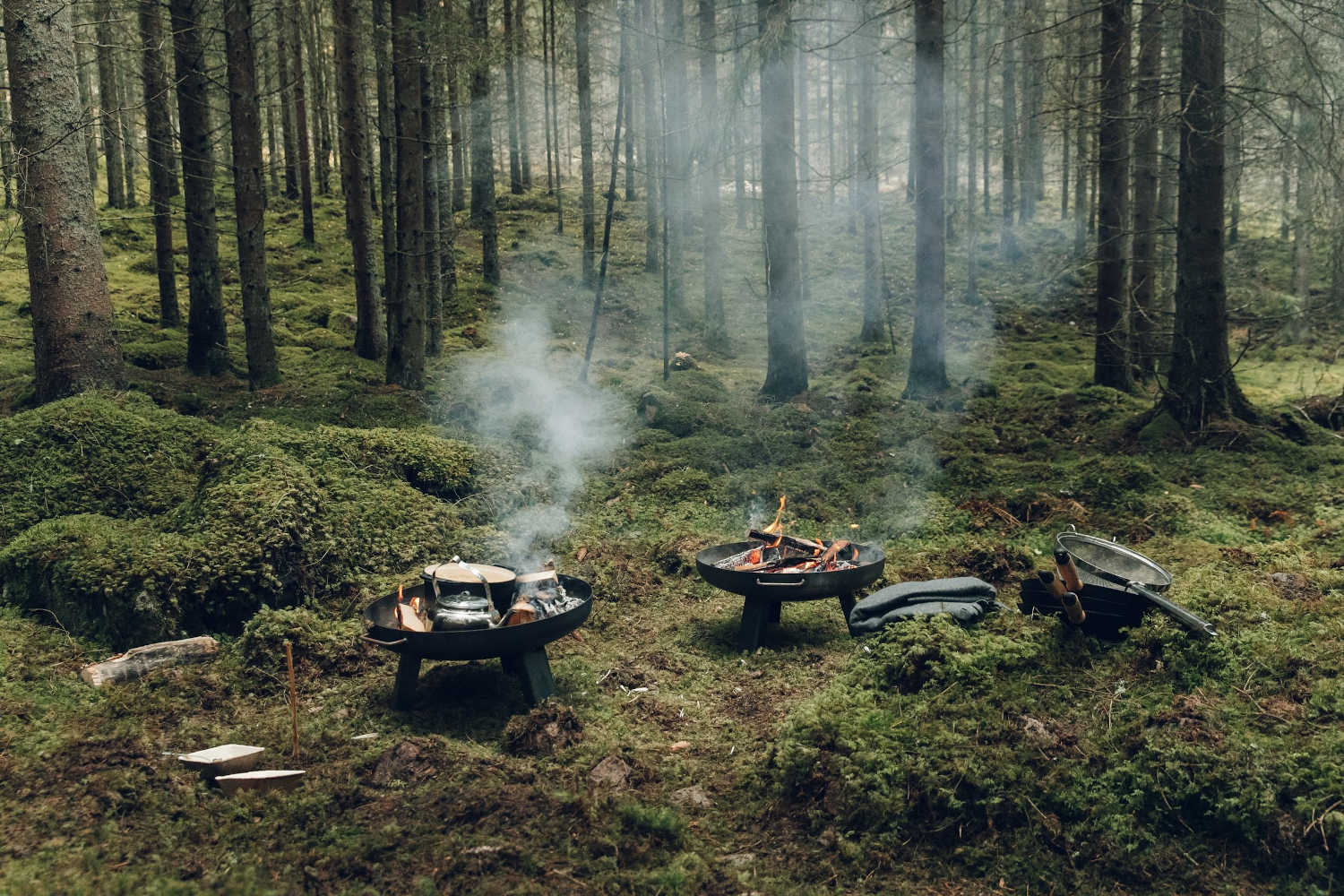 Stoves and basic cooking tools supplied with tables in the locations of Edible Country network, Sweden. (Source: https://www.haarkon.co.uk/explore-blog/sweden-the-edible-country; accessed on 16/04/2021).

Guests are invited to foraging for the ingredients that four Michelin-starred chefs (Titti Qvarnström, Niklas Ekstedt, Anton Bjuhr and Jacob Holmström) have selected for the preparation of haute cuisine recipes that are also easy to replicate. Specific recipe books have been developed for each location, starting with the wild food available on site, designed to represent the different terroirs and the seasonality of the products. The cookbooks change according to the season and latitude, and include a glossary of ingredients. After gathering the ingredients, guests are invited to cook their own lunch following the directions of the chef.

For those who request it, extra help can be provided: a guide to the collection of ingredients, or even a chef to prepare the recipes. 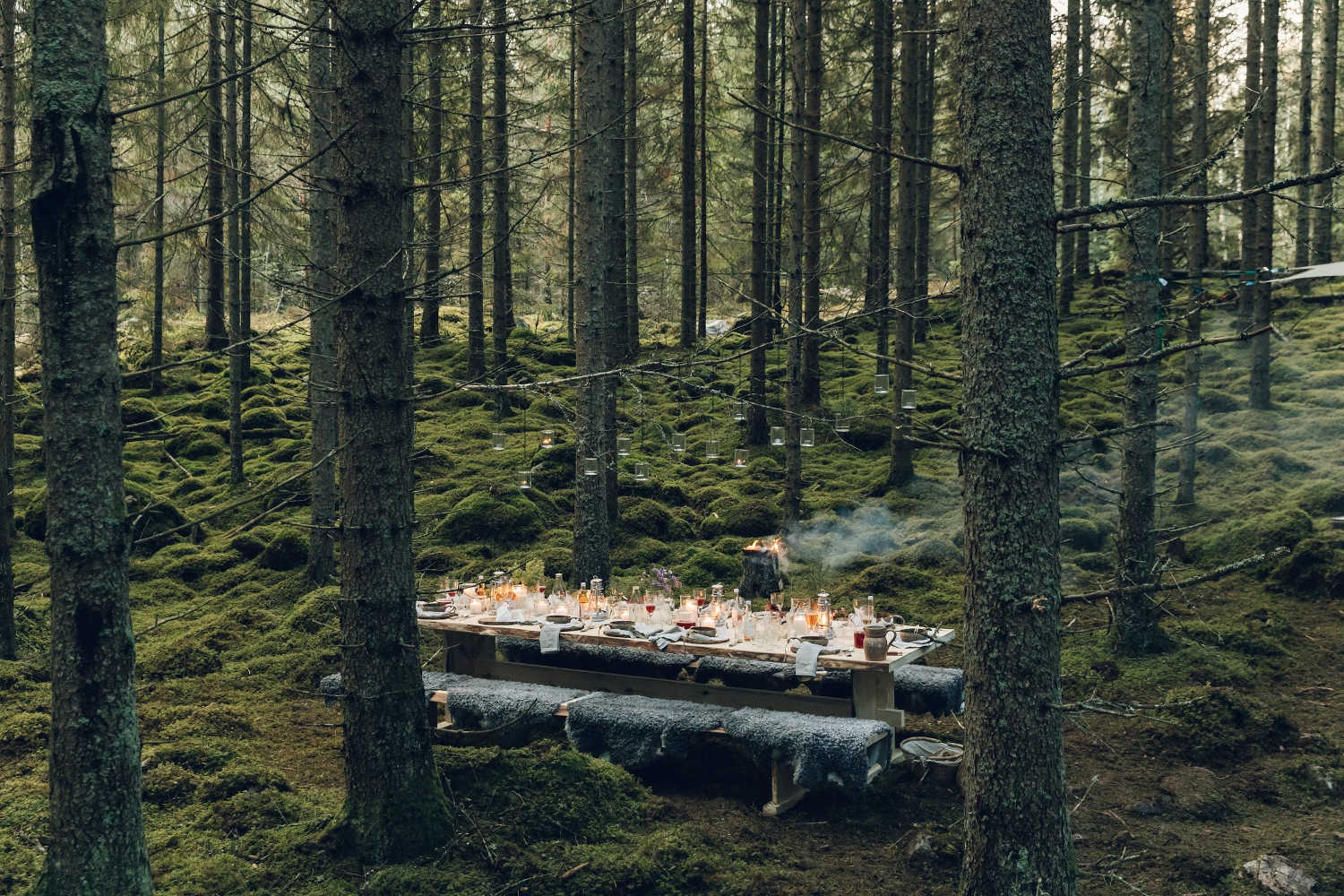 Table set up in the Asa forest in Småland, Sweden. (Source: https://www.haarkon.co.uk/explore-blog/sweden-the-edible-country; accessed on 16/04/2021).

The Edible Country is the first concrete attempt to bring the general public closer to the philosophy of foraging. The goal is to encourage people to eat healthier and locally produced foods and, at the same time, learn about and respect nature, its cycles, its resources but also its limits. The use of wild food in the kitchen, which has always characterized subsistence economies or periods of famine, today takes on a new importance in times of economic and health crises. It is an important food resource with almost no impact on the planet, and its cultural value teaches us to respect the balance of our ecosystems.

Realizing the possibility of using foods of spontaneous origin brings us closer to the plant world, helps us to understand the complex way in which food is linked to our existence, the health of the planet and its balance. It transmits the energy of feeling connected to the cycles of nature, it nourishes creativity and is a promise not to plunder nature.

So, more foraging for everyone! 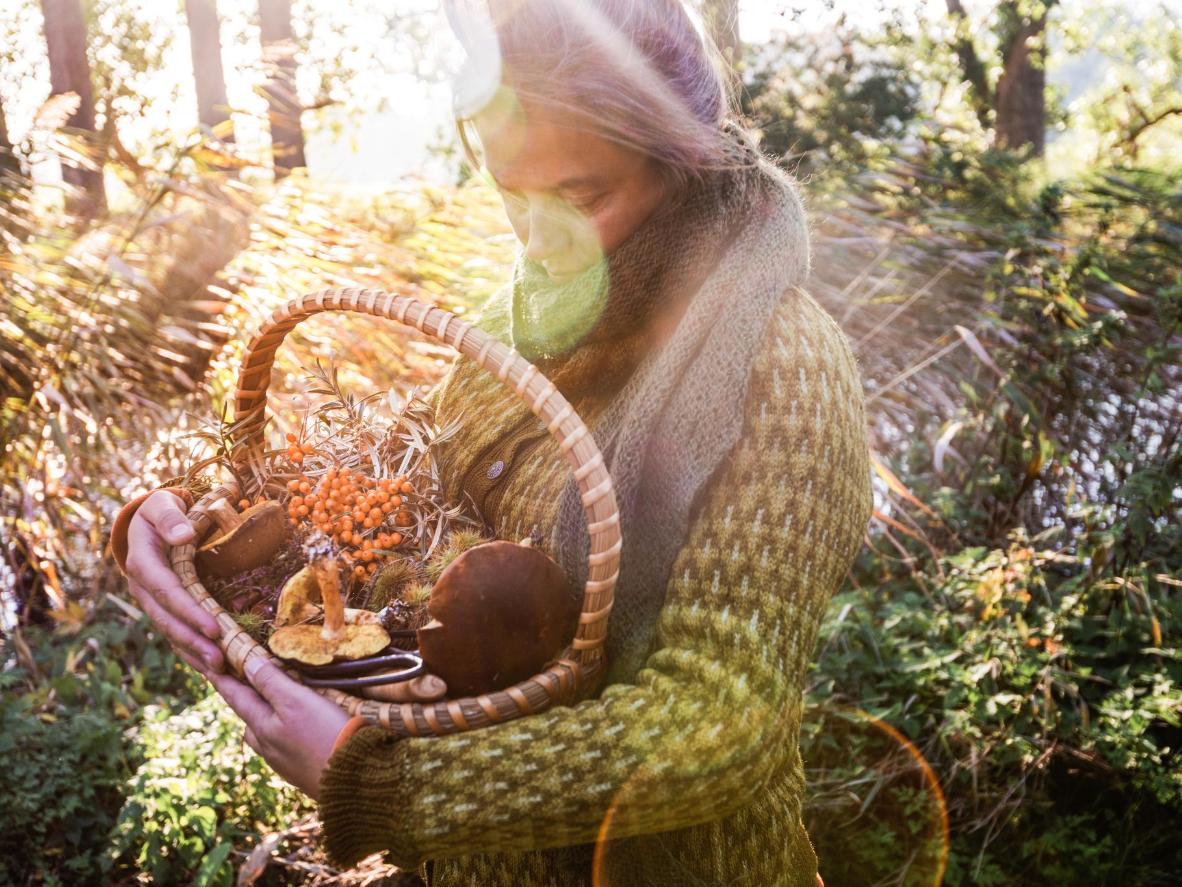 “Not being able to travel in a pandemic period because the planes remained with their wings on the ground, we visited our places by virtually navigating. The images in this article were therefore taken from the Internet and used exclusively for illustrative and scientific-cultural purposes”.

[1] Mangiapane F., “The Invention of the Nordic Cuisine”, in Nordicum-Mediterraneum, January 2015.

[1] Mangiapane F., “The Invention of the Nordic Cuisine”, in Nordicum-Mediterraneum, January 2015.