The strongest and most appealing image of Aalborg is its waterfront, facing the Limfjord that runs across Denmark, halfway between Kattegat and the North Sea (following image).

However, until a few decades ago, this water-“front” could have been described more likely as a sequence of “rears” of inaccessible, degraded and disused factories and abandoned port infrastructures.

Fed by the strongest will power, the city council decided to adopt a new project in order to emerge from the economic crisis that, between the Seventies and Eighties, saw factories and industries shutting down one by one. The idea therefore was to reconvert the image of the city from an industrial and port center into a strategic, innovative and international hub for instruction, healthcare, renewable energies and digital technologies.

The formerly industrial buildings were reconverted, and sometimes completely replaced, with the aim to host research centers, cultural activities and services for the community, overturning the pre-existing bond with the waterfront, this time projecting their main façade towards the fiord.

Two groups of architects, C.F. Møller Landscape Architects and Vibeke Rønnow Landscape Architects, collaborated for the call for the waterfront revaluation. Between 2004 and 2013, the waterfront of Aalborg was completely renovated, turning into the new city center: along the pedestrian and cycle promenade long more than a kilometer, there is a sequence of gardens, picnic areas and cultural services designed to accomplish the needs of any age and social category, conceived to attract a new population of students, young families, researchers and businessmen. The success of this project convinced the city council to expand the area: the realization of new facilities and recovery of disused port areas are, indeed, currently ongoing. 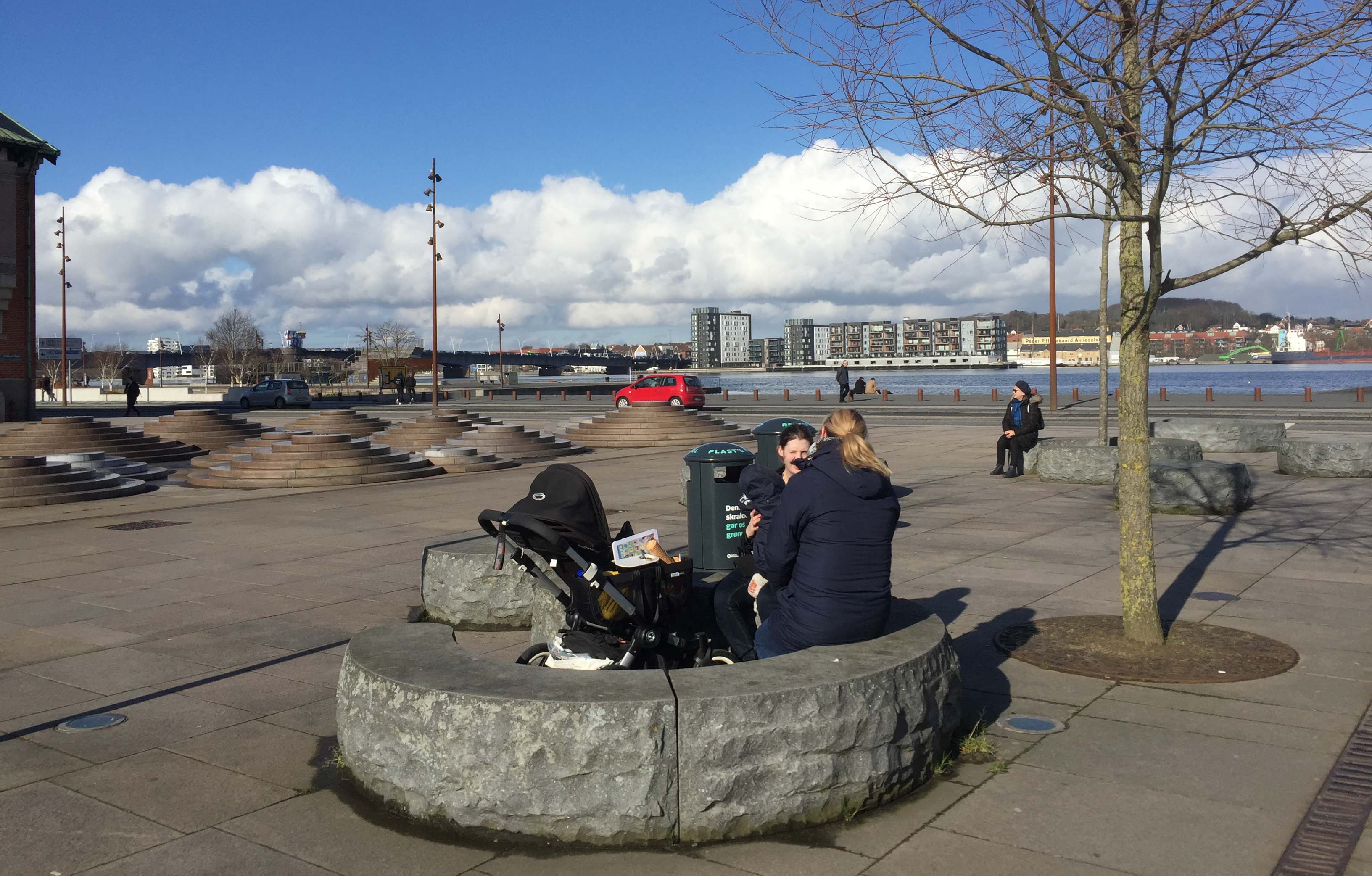 Admiring this superfast renewal of the city hitting its core, its economy and social components, we therefore wonder what is maintained, what has gone lost and what has changed in the gastronomic traditions of Aalborg.

Bars and pubs with excellent beer selection are always open in the historic center; some serve beer straight from the barrel, other are in fact real breweries. The atmosphere has retained its original features, offering customers the possibility to watch football matches, to read newspapers, to play table games or to have a tattoo done in the backyard (following image).

Aalborg, a pub in the Østerågade, one of the main streets of the historical center.

Along the Jomfru Ane Gade, the street famous for having the longest and uninterrupted sequence of bars, for more than fifty years dozens of restaurants, bars ad discos have opened and have been frequented by students and night lovers (following image). 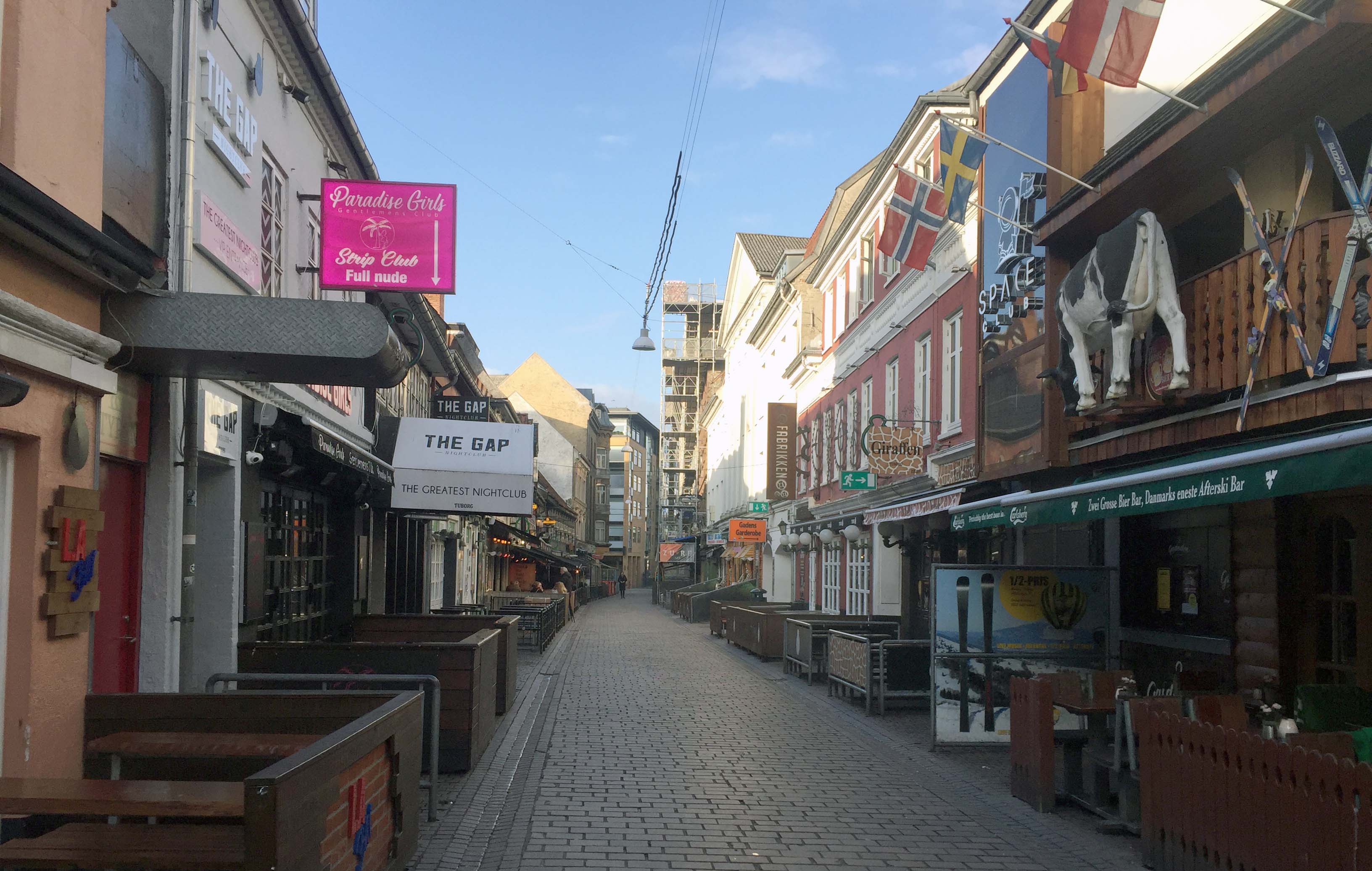 While Jomfru Ane Gade, also known as Gaden, retains its appeal and is considered one of the main attractions, one of the most famous icon of Aalborg has left the city: De Danske Spritfabrikker, the popular brandy distillery, closed the doors of the imposing factory overlooking the Limfjord in 2012, delocalizing the entire production in Norway.

The first factory of brandy that opened in Aalborg was Akvavit Aalborg Distillery, founded by Isidor Henius back in 1846; the very clever businessman was capable of producing the distillate on an industrial level starting from potatoes rather than cereals, thus exploiting this agricultural prime material easily available, way cheaper and less susceptible to the frequent storms and loss of harvest.

After extraction, the distillate is flavored with cumin, dill, Madera and aromatic herbs; flavors dictate the different varieties of brandy produced, such as Nordguld, aged in sherry cask and enriched in taste and chromatic shades of color by the fascinating treatment on amber stones.

Despite the brandy is not produced in the city any more, the Aalborg trade mark is still an excellence in the field of Akvavit with its distinctive notes of cumin and pepper, with a sweet backtaste of aniseeds, lemon, fennel and liquorice.

The closure of this and other factories triggered the need to reconfigure the waterfront, that has nowadays become the new city center; herein a sequence of museums, areas equipped for outdoor sport activities, universities and cultural institutes. In the requalified zones, there are new green picnic areas like the Jomfru Ane Park, the garden of the old castle of Aalborghus and the outdoor swimming pool floating in the Limfjord. Here you can admire astonishing examples of contemporary architecture such as the Musikkens Hus of the Coop Himmelblau, the Create campus complex with student residences designed by Henning Larsen Architects (following image) and the Utzon Center surrounded by sculptural benches (subsequent image). 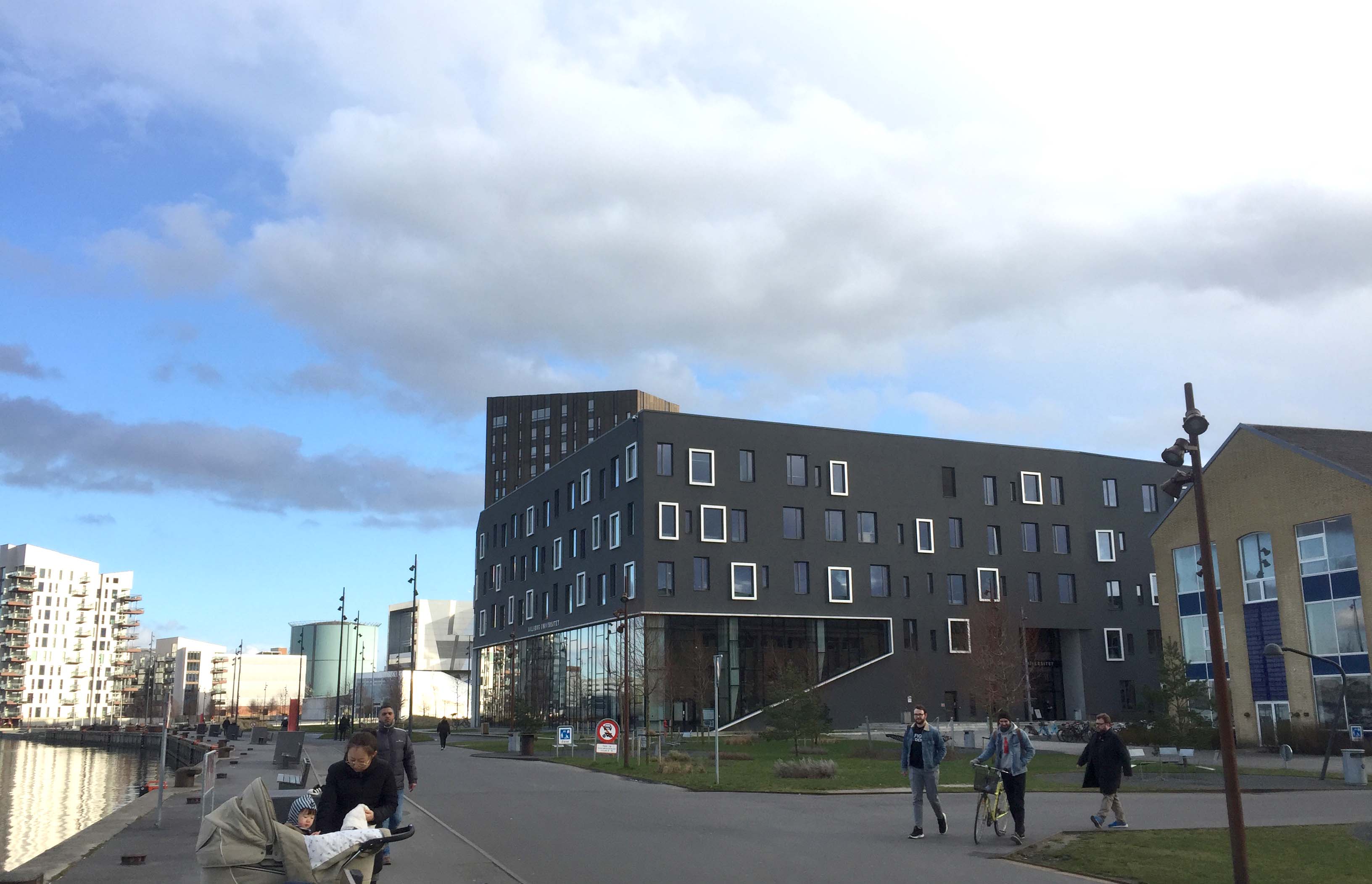 Aalborg, the new university pole Create built on the waterfront. At the back, the Musikken Hus. 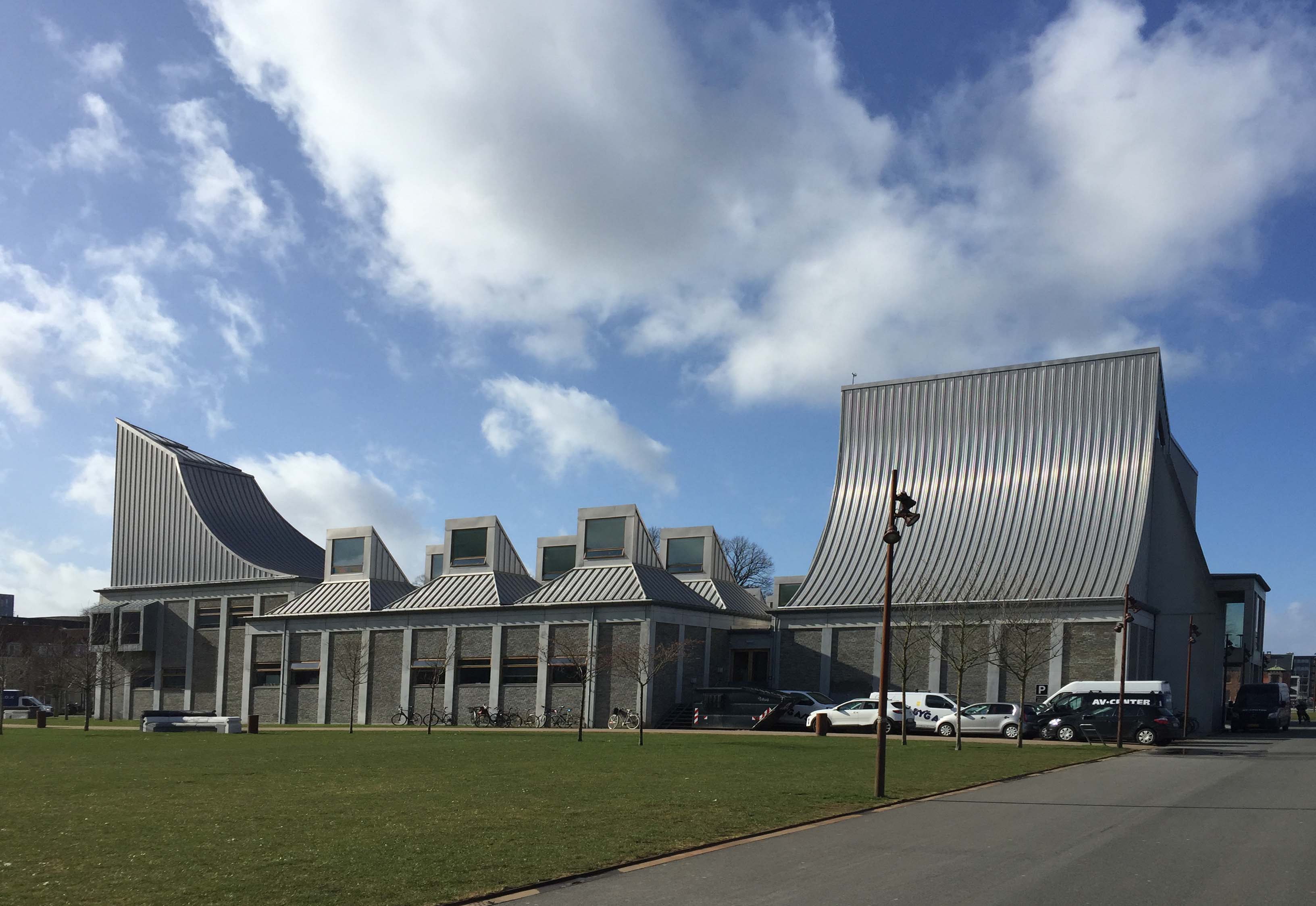 Among the new cultural buildings, the Utzon Center is the one that offers an exquisite immersive experience. The center was planned by the famous architect Jørn and his son Kim who wanted to donate to their native city a place where architecture meets society, where the nature-inspired design becomes a piece to exhibit in a museum, where spaces for laboratories welcome children and young people who try their hand at experimental activities, where offices and research laboratories are open to the free use of visitors (following image).

The architecture of the Utzon Center is perfectly integrated with the surrounding urban and sea landscape. The big windows facing both the inner cloister, with its garden, and the Limfjord erase the line existing between inner and outer space. The visitor is attracted by the exhibitions in the museum that are eager to tell stories of the father of the Sydney Opera House, revealing those poorly known details about his personality. The visitor that enters the Utzon center gets trapped by the numerous cultural initiatives promoted by the Center and, simply, is cherished by the Jørn Restaurant.

And that’s exactly where I wanted to walk you to, to discover how the city of Aalborg in the middle of its transformation has been able to create a groundbreaking mixture of culture, tradition and innovation.

The tiny and welcoming restaurant realized in the name of the architect, is located in the north branch of the building that with its big windows make us feel utterly embedded with the city landscape (image in the text opening).

Fondly seduced by the interiors designed by the architect, the menu proposes a selection of high rate dishes, distinguished by their elegance and perfection, totally in keeping with the surrounding style. An thoughtfully selected wine list is available to accompany your choice of food and the mise en place is a triumph of well-balanced chromatic contrasts and sophisticated combinations of flavors, conceived to stimulate the five senses and to excite your imagination, as if, as a matter of facts, you were standing in front of a work of art. 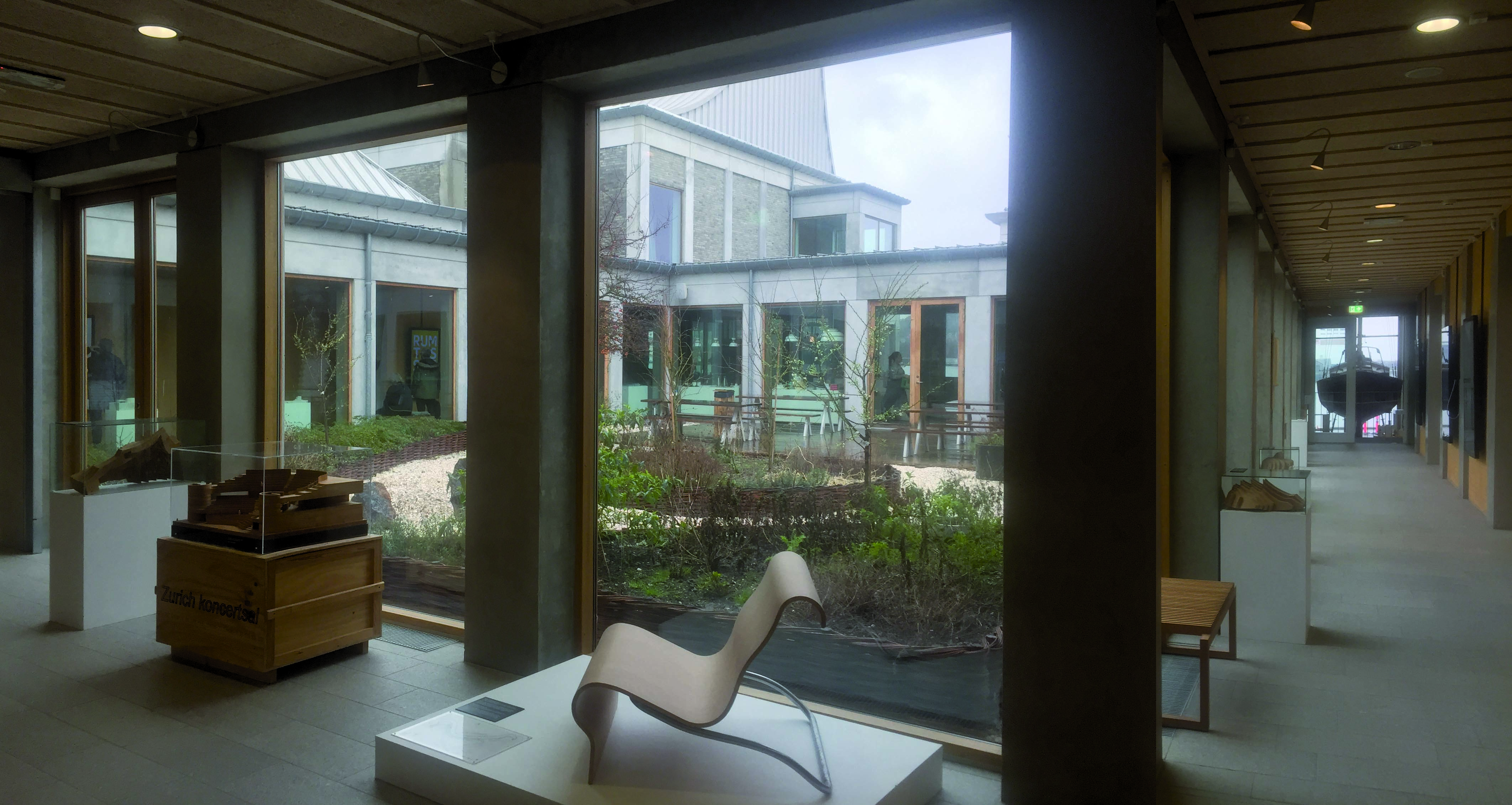 The gastronomy is molded in the total respect for of the environment, through the use of local and fresh prime food and biological products; the classics of the Danish culinary culture, relying on what can be easily farmed and harvested during the short Danish summers – such as cauliflowers, roots, meat, fish, and the must-have rye bread – are reinterpreted with surprising remakes which end up producing works of art with a contemporary taste.

For example, the codfish served on a cauliflower terrine, an artful remake of the more traditional smørrebrød, the dish that represents the Danish cooking and that is made with buttered rye bread, fish or meat and vegetables to finish.

The more modern version of the classic recipe consists in the replacement of the slice of rye bread with a terrine of cauliflower fried golden brown on two sides with salted butter. Placed on top, the opalescent codfish fillet from the North Sea, gently steamed and rendered crunchy by a garnish of carpaccio of cauliflower crudités.

Fish and vegetables are rigorously prepared without addition of any salt, which is brilliantly compensated by a sapid broth of warm fish, made velvety by addition of milk cream, and poured on the dish when served at the table.

Crowning the dish, a green/violet garland of watercress and radish sprouts, characterized by spicy notes that alternate and enhance the crisp fragrance of freshly cut chives (following image). 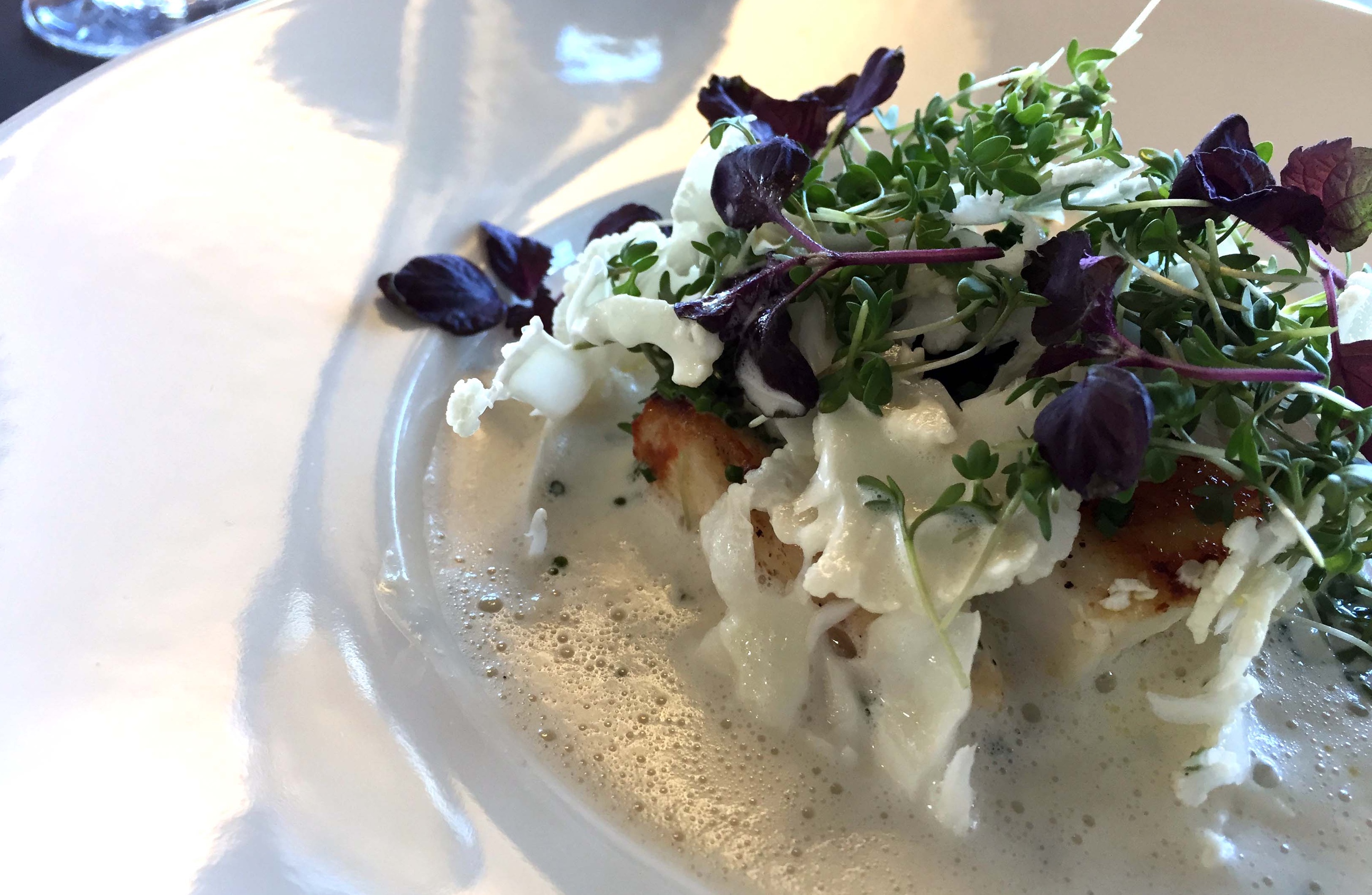 A new alliance between tradition and innovation, culture and conviviality, man and environment is celebrated today in Aalborg, the city where the principles established in the Charter of European Cities & Towns Toward Sustainability, here signed in 1994, are actually honored at 360 degrees, tangibly spreading out its effects in new sustainable models of cohabitation with our planet.

And cooking makes no exception, in the respect for tradition, yet without giving up to innovation, a well-balanced relationship of respect for the environment that today ranks Denmark as the happiest country of Europe!

Aalborg, plan of the waterfront. The places described in the article are highlighted in white.