“Because invoices and commercial letters are the beginning of the story, and the ships carrying the merchandise for the eternal sea are the end of it”.

The paradoxes of the port

Ports remain the beating heart of entire cities, they are their most solid identity. They contain entire local epics and in Asia and Europe there would be no city without the port – and not vice versa.

Yet they the two are often separated bodies. The port areas are is prohibited for “civilians”; they are governed by autonomous authorities, often sort of governments establishing their sovereignty over a citadel administratively subject to internal laws, written and unwritten ones; they mark a sometimes peculiar organization of work, without direct correspondence with what is in force outside the port zone; ports belong to the city, but also to an entirely internal world whose functioning is sometimes little known by to those outside.

Ports also remain the operational link of the mechanisms of globalization, which began on many of the first containers – this simple and revolutionary invention that allows relocation of production sites. They are centers of so many cosmopolitan intertwining; by leaving the port of Dakar, one can read the immense graffiti written in huge Greek characters by some sailors, while on the docks one can hear spoken languages from all over the world, just as universal are the flags and names of the ships.

Yet, in a network of networks, in the intertwining of forms of direct cooperation between entities distant from each other but sharing the same challenges, ports stand out for lack of direct collaboration. There are a thousand protocols and sectoral agreements, however, perhaps due to this structural condition of permanent connection with the rest of the world, the port lingers in the illusion of being able to be a sort of monad in itself: few programs of organic cooperation between ports on the policies of the future – sustainability and environmental impact – and on the ways of interacting with the city that each pier has close behind – a relationship that everyone resolves or sets aside in their own way. Asia and Europe multiply their partnerships, but on ports the real encounters are through the direct investments of each other. And an Alliance of Ports, spokesman for a Common Strategy, does not exist, it seems that no one feels the need.

For a long time it might have been thought that the port is the infancy of modernity, while the railway station in its adolescence and the airport in its maturity. This is no longer the case. It is no longer the speed of movement, nor even the quantitative capacity of fret that establishes the hierarchy of who is more in the future; the future lies rather in the sustainability of connectivity. Railway stations have taken advantage of this: they have been transformed into high-tech and increasingly clean infrastructures, in center of commercial and productive activities of the city, in poles of social aggregation and no longer of marginalization. In a few decades, their redemption, supported by projects of the most famous architectural firms, has swept away a glossy image of nineteenth-century “terminus”. The airports, for their part, try to resist. Some of them try to improve the connectivity with the city, some (Amsterdam, Malpensa) host museums and exhibition spaces, others (Singapore) create an internal path of gardens, fragrant and green oases. All these efforts aim to support their sustainability and shape an idea of future. As far as the ports, one can wander what they are doing.

Yet ports, the infancy of travel, retain a stratification of intangible assets (ancient trade & prosperity, migrations & individual and collective destinies, international connections & circulation of ideas) and materials (architecture, technological solutions) in such a quantity hardly seen in other places of human civilization. The port is at the same time a departure and arrival terminal, a factory, a warehouse of a thousand things, an innovation laboratory, an identity, an economic heart, a customs house, a place of political power – a problem, a solution, a memory.

Some ports – Cape Town, Auckland, Wellington, Dubai – have opened up to the city, offering “waterfronts” with mixed activities. Docks occupied by goods to be loaded and cargo docked are reflected in museums and shopping centers, promenades and bicycle lanes: the port breathes, citizens flock because the port always “likes”, the area becomes an extraordinary economic resource.

In Italy something there is something like that in Genoa, and even among the ghosts of the Venetian Arsenale. Yet, there is code of good practices for Europe and Asia on how to open a port to the city – which, per se, would make it more sustainable.

Europe and Asia would not be them without their ports. They met thanks to the caravanserai of the Silk Road, and to the portolans. Ships soon took over from quadrupeds. But above all, the port has almost fulfilled a neurological function: activating motion and travelling, and thus alleviating melancholy, sharpening the need for paths to explore, locating destinations, exchanging one another’s wealth. Ports have been the cornerstones of peaceful coexistence. They are the glory of their cities, sea cities, the first ones discovered by travelers such as Ibn Battuta, Giovanni da Empoli or Zheng He. Even today, few know the thrill of entering a city through its port. Even for those arriving in Asia from the sea, the quality of the meeting is completely different.

It is also a deceptive experience, because a port is not the city. Entering this parallel and protected world, is like entering an airplane, where one is subject to the absolute monarchy of the captain and of the hostesses in charge of rules to which you submit without question. Even a tourist, on the quay of the port, is not a tourist, but a traveler at the foot of his ship. 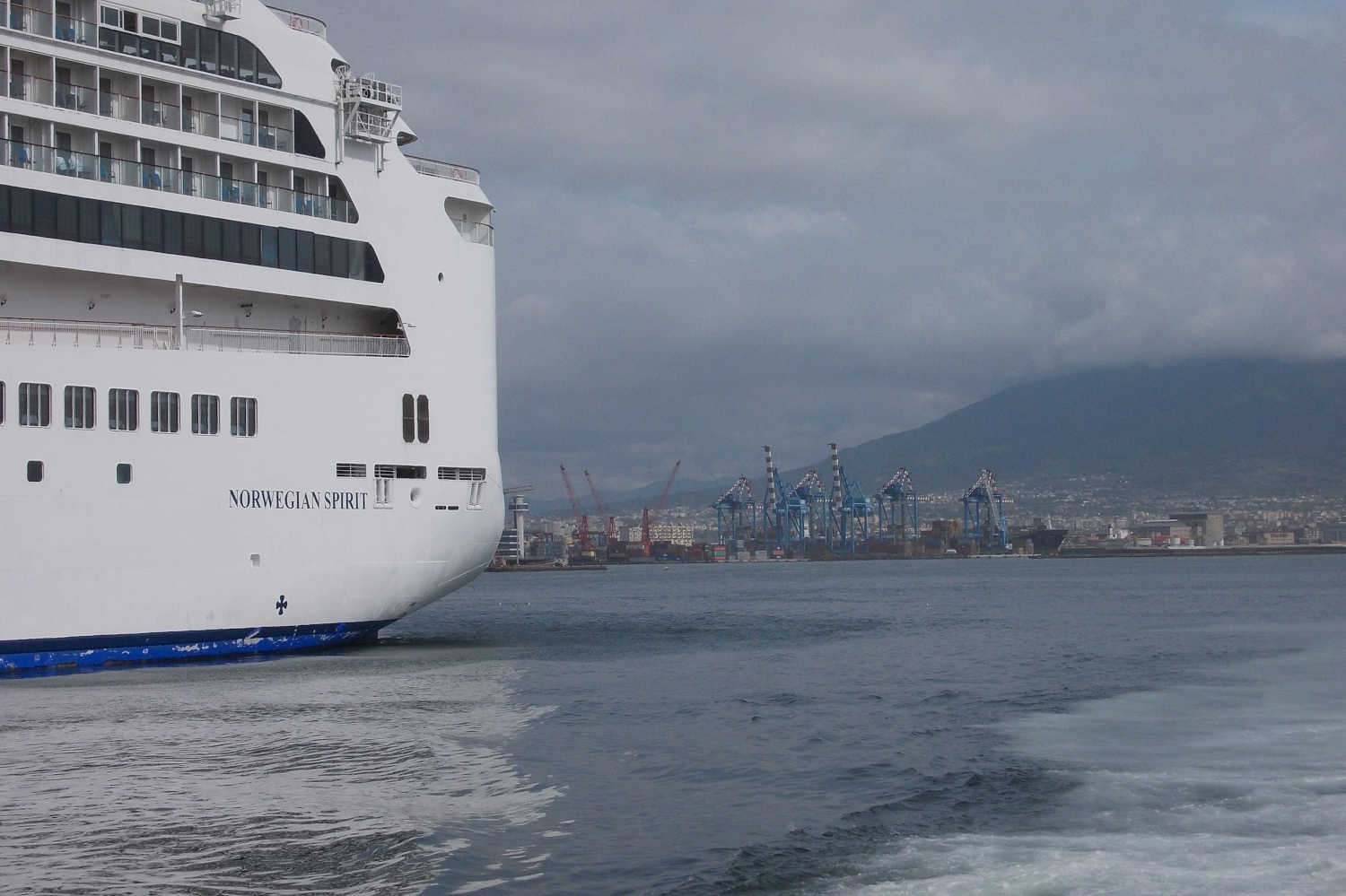 View of the Port of Naples, Italy. (© Photography: Oriana Giovinazzi).

The pier is the street, the port is the city

A seaside city without a port, however small it may be, is incomplete, just as a sea without ports is nothing more than a labyrinth. However, a port, whatever its size, which does not care of the environment of its sea nor of its the city, polluting them, is guilty of high treason towards both.

Its redemption, also as a laboratory in identifying sustainable solutions, depends also on conceding the process of goods and people as an activity of poetic production, because of the evocation and inspiration of connections and of the collection of the thousand stories of movement; a port is full of life – an intangible common good. The port ceaselessly warns that the world needs movement and that movement, its sustainability, must be respected.

In other words: port operators cannot be cynical, but curious, humanist, cosmopolitan – and this also implies an environmental awareness. Even in this Europe and Asia have no differences, because everywhere the port is an intimate cosmos. A private cosmos fed by a universal cosmos.

Networking ports, but without a network

An Asian or European port is the harbinger of a free trade agreement – such as those between the European Union and Singapore, the European Union and Japan, or South Korea, or Vietnam. In turn, the ports receive lifeblood from these agreements. They all have a particular chapter dedicated to sustainable development, governing the social and environmental implications of trade. However, the logistic poles, essential for the implementation of the agreements, are the ports, which themselves are deprived of technical cooperation, financing and exchanges of good practices that free trade agreements favor in so many other fields. There is no real “charta”, a protocol or a real common agreement to foster cooperation between ports. What is missing is a sort of Euro-Asian “Hanseatic League” approach for the 21st century: it is not there, it is missing.

“Independent republics”, ports are often regulated in their own way, with the greatest degree of openness with respect to the rest of the world for what passes through them, and a good degree of impermeability with respect to the rest of the world as regards their financing and your own responsibilities in terms of environmental impact. The shopping list is quickly said – fuels, emissions, waste treatment, purifiers, materials, storage rules, etc. Problems, quite often, with already identified solutions – but often left outside the harbor fence. Every port thinks it can manage on its own – another paradox, because a port, by definition, is aware that, in its solitude, will always be useless.

A light boat, a light port

When Barbara Bonciani, tireless “minister for the port” of the glorious city of Livorno (a post that already evokes a field of action full of possibilities), asked me to speak to one of the most qualified, seminar on ports’ challenges on environmental sustainability, I thought about the maritime journeys of Europeans and Asians, and on the junk.

For a long time the Chinese knew how to build boats with techniques superior to those of the Europeans, at least according to many historians. The supremacy laid in sustainability (a consequence of the concept of ease) of the junk. Built with local material, where the waste pieces could be reused without difficulty, the junk was suitable for any port; in the absence of a pier, it could be dragged on a beach to unload and load; if stacked on a sandbank, no tugs were needed to get it off the ground; its sails were perfectly positioned to take advantage of any wind with ease. The junk on the water does not sail, it flies, thanks to the smaller immersed surface compared to the surface of the sail; its construction is almost elementary and rapid, based on a system of longitudinal and transverse bulkheads. An avant-garde ship, the junk.

Here we are: Europeans and Asians will have to think of a new junk for their 21st century ports.

Ports remain the heart of entire cities, sometimes megacities, to the extent of being their most evident identity. Yet they are often separated entities. Ports also remain the operational link of the mechanisms of globalization. Yet, in a network of networks, in the intertwining of forms of direct cooperation between entities distant from each other but sharing the same challenges, ports stand out for lack of direct collaboration. These are the paradoxes of the port - in the relationship with its city, of which it is the soul and from which it always has a form of separation, so much so that it does not often share the same anxiety about environmental sustainability; and in the relationship with his fellow men scattered around the world - daily and existential but not fruitful in a common reflection. An Asian or European port is an essential factor of a free trade agreement. However, the connecting links, essential to the implementation of the agreements, that is the ports, often escape the vast interweaving of technical cooperation, financing and exchanges of good practices that these free trade agreements favor in a many other fields.