Skip to content
REPORT | Port-city scenarios during and after the Covid-19
8 Novembre, 2020
PDF

The Covid-19 crisis changed the face of many cities and questioned how to manage urban life and socio-economic problems in the wake of a pandemic. Within the port cities the social and economic impact of Coronavirus hit seriously port and logistic activities producing questions and opening new scenarios. The crisis questioned new governance and operation tools able to deal with the new emerging problems. As it known around 80 percent of global trade is transported by commercial shipping. The Covid-19 containment policies seriously affected sea transport, and ports activities damaging trade flows and supply chains. In this framework the crisis of cruise and passengers transport impacted to the port cities seriously.

In Livorno, such as in the other Italian ports, the impact of the Coronavirus in vessel traffic and shipping industry was very hard.

While the vessel traffic concerned Ro-Ro, Lo-Lo, container and break bulk were reducing, starting from March, around 30 and 40% in few months, the cruise ship activity has collapsed, decreasing tourism activities.

The consequences of the Covid-19 in Livorno cruise traffics and job opportunities related was remarkable. Indeed, most of the Livorno  citizens are employed in port and logistic related companies.

The city port of Livorno looks out onto the North Tyrrhenian sea and it is located in Tuscany Region. The city derived important socio-economic benefits from the port activities. Indeed, with its logistic satellites, the port represents the only ‘industry’ remained in the city. Livorno is a multipurpose port, provided with infrastructures and equipment that can berth any vessel and handle any type of goods traffic (Lo-Lo, Ro-Ro, bulk solids and liquids, new cars, cruises, ferries, timber and timber derivatives, machinery etc.); it is classified as a Big Regional (first level port) along the Tyrrhenian corridor, by the Freight Leaders Club. The port is located in a strategic position for the distribution of the disembarked goods throughout the country.

Being the first port of the Tuscany region, Livorno is also the gateway to the region for cruise passengers.

The port of Livorno is one of the main transit call [1] in the Mediterranean area for cruise ships, where passengers and crew are effectively day visitors. In this type of port, the generated tourist consumption is mainly related to shopping, guided tours and on-land excursions. The importance of the port of Livorno for cruise tourism is due to the vicinity of touristic destinations, such as Pisa, Florence and Lucca. In the last years the number of cruise passengers has considerably increased in Livorno. In 2018 the city-port counted more than 800 million passengers from cruises.

The 2020 was announced as a year of growth for cruise traffic. Instead, due to the Covid-19, in the first six months the cruise traffic contraction was around the 93,6% and the ferry one reached the -68,2%.

In the city of Livorno the social and economic impact of cruise sector is very important, for the passengers and crew’s expenditures, but also for the work generated in the port terminal facilities and in the cruise  integrated value chain.

According to the Port Network Authority study [2], it is estimated that the cruise crisis could have a deep impact on Livorno economy, generating between 53 and 64 million Euros lost in 2020.

The situation it is still one of absolute uncertainty and it is gets difficult to predict whether or not cruises will start again between now and the end of the year.

From the beginning of the crisis the Mayor of the city of Livorno and the Councilor for port and port city integration decided to open a governance integrated approach together with the North Tyrrhenian Port Network Authority, Harbour master, the main maritime and logistic associations (industrial, ship owners, shipping agent) and labour unions in order to supervise and manage the impact of the Covid-19 to the port and city economic activities.

The new open governance tool created by the Municipality of Livorno (the Mayor of Livorno and the Councilor for port and port-city integration), called “Cabina di regia città porto” (city port direction room) [3] aims to support companies and workers in the socio-economic emergency and uncertain scenarios generated by the Covid-19. The Mayor of the Municipality of Livorno, Luca Salvetti, and the Councilor for port and port city integration, Barbara Bonciani.

The city-port Direction Room was created in order to provide support to port operators, logistics companies and workers during the Covid-19, discussing challenges and developing innovative coexistence solutions.

For the city of Livorno the port is the main driver of development. It is therefore clear that in a moment of crisis such as the one created by Covid-19, the city and the port community needed to strengthen their relationship in order to discuss together challenges that the port and the city are facing and develop innovative solutions. All the stakeholder were involved in the process by developing a problem solved approach.

The crisis affects not only the port but also the city and the cruise line value chain. What worried the most for the city point of view was certainly the economic consequences of the crisis and the social stability of the local community.

The cruise and ferry ships stop

The first meeting of the Direction Room was combined in April 2020 with round up every two weeks.

The first challenge was to developing coexistence solution to manage the cruise and ferry stop.

In order to support the company and manage the social and economic impact of the cruise crisis. the Direction room asked to the North Tyrrhenian Port Network Authority to take action at ministerial level with the Ministry of Infrastructure and Transport to promote the extension of art. 92 of the Cura Italia Decree also to passenger terminals (concessionaires ex. Art. 36 of the Navigation Code), in the form it will take when converted into law. Indeed the first text of the low did not provide for concession fees reduction or resetting in this case, but just for Terminals ex Art. 18 Low n. 84/94.

From the point of view of social stability, the Salary Integration Fund has been applied to all the staff of the company. Nevertheless the seasonal workers normally employed by the company in the cruise high season risked to be left at the starting post. 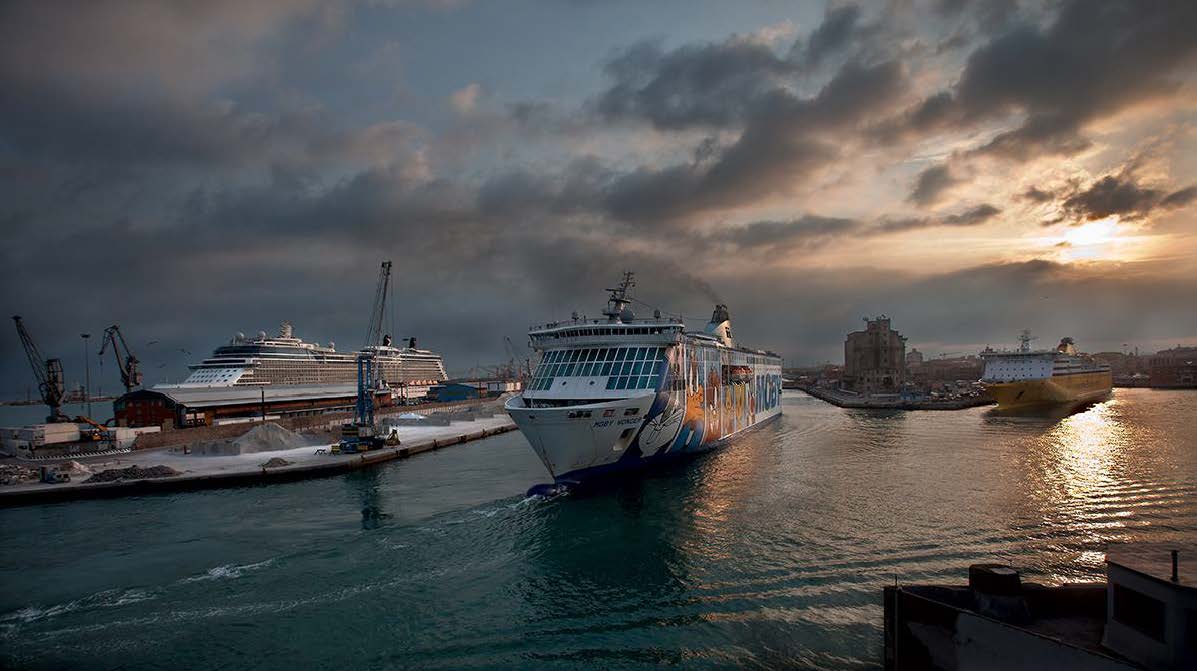 In may 2020 the Italian government decided to re-open the operations of ferry ships on June, the 1rst. In the port of Livorno there are ferry schedule to Corsica, Sardinia and Sicily with high number of visitors during the high summer season.

In June, according to the Government guide line on cruise terminal that aim to facilitating the re-start of operations of ferry ships by recommending minimum measures expected to be implemented by all terminal, while maintaining general safety and security standards, the Direction room propose to employed the cruise seasonal workers in Covid-19 prevention activities focused on ferry passengers. The Municipality has also set up an inter-sectoral work group to support the Port Network Authority in developing the Implementation Plan.

After two months of integrated work, all the seasonal workers were employed by the terminal with Covid-19 prevention task. This is was a very important goal for the direction room and for the city in order to preserve social stability.

Managing the Covid-19 impact on road transport and logistic companies

The work of the Direction Room is still focused on managing the social and economic impact of the commercial traffic decrease to port activities and port value chain.

Focusing on cargo ships, sailings are down in 2020 already from the beginning of the year, due to the outbreak in China and the following shutdown of production. Gradually the Covid-19 reached the western countries creating lockdowns across the globe from mid-march. Many of the country interested by the lockdown have trade with the port of Livorno. In this scenario, the traffic of the port dropped with economic and social consequences on workers and companies. The decrease of sea transport damaged trade flows and hit severely supply chains. The Covid-19 impact on road transport and logistic companies was very hard, less of 53% in the last four months. According with the road transport association CNA [4] in the road transport sector, 152 companies close the business and 385 workers were dismissed. According to the Shipping agent associations (Spedimar and Asamar) within the logistic companies around 1300 workers obtained the Salary Integration Fund.

In order to manage a potential traffic decrease in October, with potential new worker dismisses, the Direction Room decided to ask to all the stakeholder to take action in order to limit the consequences.

The Municipality of Livorno started to work with the Regional Government in order to responses to the companies requests and faces the main problems that they need to face.

The companies need loans to doing investments in smart working and technological innovation, simplify the access to credit, reduce the fulfillments, accelerate the Salary Integration Fund payment for workers, etc.

This work is still in progress and the Municipality of Livorno put efforts in order to improve social and economic state of companies.

In this framework it is important also to strengthen the port city relation in port competitiveness at international level, by facilitating the realization of the maritime infrastructures, already financed but not concluded yet, relaunch the port logistic value chain, promoting simplifications in all the administrative processes.

The Covid-19 crisis will need to further enhance sustainability and resilience of the maritime transport sector as a whole and for the port cities and their stakeholder, for sustaining jobs, international trade, and global economy, as much as possible.

In the port city of Livorno the social and economic impact of Coronavirus hit seriously port and logistic activities producing questions and opening new uncertain scenarios.

In moments of crisis such as the one we are facing, it becomes essential to create community and join everyone efforts by the pursuit of common good. The port is certainly a “common good” for the city of Livorno. In this framework it is essential to combine the city and port efforts (public and private) in order to raise the level of competitiveness of the port of Livorno, at a time when global operators, in particular ship owners, are looking for even more efficiency in port systems in order to reduce costs and obtain shorter transit times for ships and goods.

To do this, it is necessary to accelerate all operational issues concerning the construction of needed infrastructures, to promote intermodality and digital simplification. Moreover, particular, attention should be paid to promoting the city-port system, and attracting new traffic and services.

[2] In general a transit call, or a port of call is a place where passengers disembark temporarily, and then embark again in order to continue the cruise. Differently, in a home port passengers begin and finish their cruise travel.

Within the port cities the social and economic impact of Coronavirus hit seriously port and logistic activities producing questions and opening new uncertain scenarios. In Livorno, such as in the other Italian ports, the impact of the Coronavirus in vessel traffic and shipping industry was very hard. While the vessel traffic concerned Ro-Ro, Lo-Lo, container and break bulk were reducing, starting from March, around 30 and 40% in few months, the cruise ship activity has collapsed, decreasing tourism activities. The consequences of the Covid-19 in Livorno cruise traffics and job opportunities related was remarkable. Nevertheless the Covid-19 crisis open new opportunities in order to share the potential value of different urban governance experimentations. In this framework the Municipality of Livorno together with the Councilor for port and port-city integration open a new governance and integrated approach with port community direct to supervise the impact of the Covid-19 in port traffics and in city social and economic development.