The problems posed by the coexistence of ports and urban fabrics are in part common to those generated by other transport infrastructures. These are problems of urban integration that occur within the limits of these areas that, for different reasons, have lost suitability to host either urban or infrastructural use and eventually become degraded areas.

In case of ports the resolution of such problems has specific nuances, because of their symbolic character and, in many cases, their central position in cities. In turn, the intervention on these areas offers great opportunities for their ability to foster urban renewal processes.

In the Mediterranean it is inevitable to refer to littoralization and the growing importance of the tourism industry. Both factors affect the demands to improve public spaces, and the iconic role of the areas which are most linked to the sea, both for its ability of urban projection and the generation of economic activity.

To this must be added the constraints related to cultural heritage of many of their urban centers and with their size, especially in medium-sized cities.

Furthermore, it should be noted that port areas are scarce resources that have to be preserved for uses that by their nature can hardly have another location.

Well then, how to address the adaptation of those port areas that have lost their functionality in favor of other port areas more suitable for certain uses? and, on what basis should be faced the rearrangement of these areas, especially when they affect port-city limits or when port uses and urban uses can coexist without major conflicts?.

As it happens in other fields of transport infrastructure engineering, the prevalence of certain sectoral approaches over urban and territorial constraints sometimes results in clear imbalanced results on the ground, with significant room for improving environmental quality, without functionality losses of the existing infrastructures. It is the case of road planning when interurban roads design criteria prevails in urban areas, especially when there are existing alternatives to these roads. It is also the case of medium-sized port cities, with port infrastructures constructed in the past to provide certain transport services that have little or nothing to do with the current needs.

However, the proper response to both the requirements of port activity as the fair aspirations of citizens to recover urban spaces such as port waterfronts, depend largely on the existence of appropriate channels for dialogue at institutional level, but also on the professional practice of planning decision makers (in the ports and in the municipalities).

In the case of ports, a reference to the legal-institutional framework should be made. The instruments governing port planning, that in the case of European Mediterranean countries are mostly anchored to the national level because of the belonging of ports to the public domain, have significant traditional rigidities and important inertia that somehow difficult the combination of sectoral criteria with other ones in favour of projects able to provide more rational planning of port waterfronts.

However, reality shows a wide enough range of interventions in coexistence areas of urban and infrastructural uses, not just in ports, which have been developed under very different territorial and legal-institutional constraints. On this empirical basis it could be argued that despite the variety of constraints, which no way are negligible, when there is the will to reach balanced solutions appropriate formulas for its development are found.

Four interventions in the Comunitat Valenciana

The Valencian Regional port system consists of 36 ports managed by the Regional Autonomous Administration, among them those of medium-sized coastal cities, with populations of around the 30,000 inhabitants, that during the summer can easily double or triple these figures. 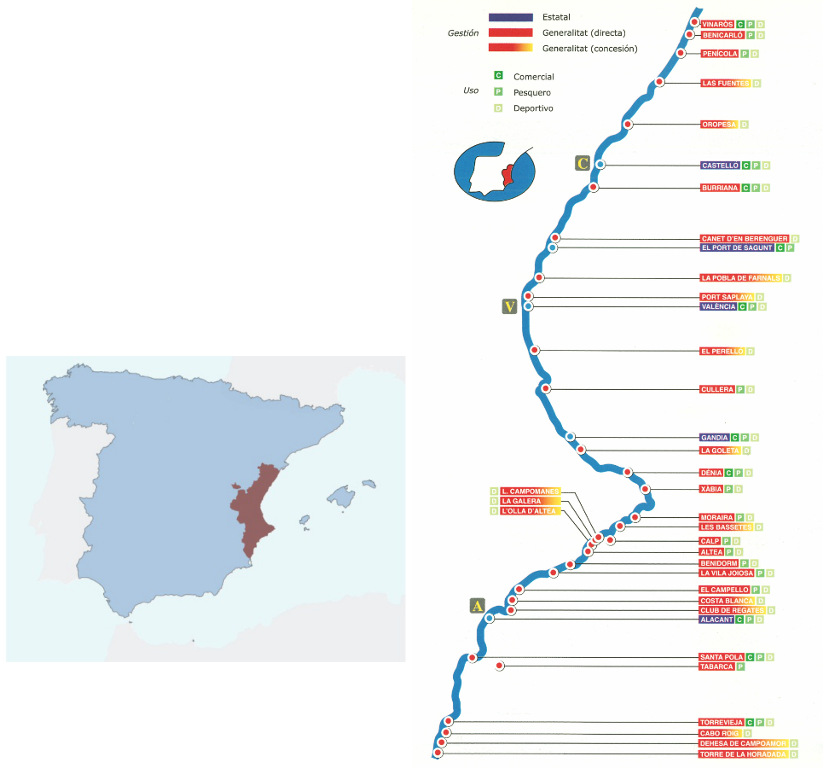 The ports of these cities host port activities that mostly are perfectly compatible with solutions committed to the coexistence of port and urban uses.

These ports are managed under Landlord basis. This circumstance, which implies the existence of very diverse local economic interests that sometimes can lead to difficulties in planning, has allowed investing financial returns of some of these concessions in actions to improve port waterfronts.

The Valencian Regional Law 2/2014 on Ports sets out a port planning model in which the Regional Administration has, as at National level, an instrument for the structural planning of the port areas. This plan defines the areas needed for port activities and those others that can be devoted to port-city interaction [1]. Coordination between urban and port planning takes place through urban planning instruments at Regional or Local initiative depending on the case [2].

Moreover, it is worth mentioning the consideration of ports in the Valencian Territorial Strategy and the references that it makes to the role of the public action at the port waterfronts developments, with a special mention to the integration of port and urban uses [3].

On this basis, the Regional Government is promoting actions in different ports.

Torrevieja is a city of about 105,000 inhabitants located in the south of the Comunitat Valenciana which has experienced a strong demographic growth in recent decades [4] linked to the production of holiday homes and immigration from Europe, whose population represents about 45%.

Its port, linked from its origins to the international trade of salt, currently preserved, maintains a strong fishing vocation and about 2,400 moorings. Some of the most important cultural events of the town take place in the port waterfront. The outer configuration of the port dates from 1954.

The evolution of the port left aside the port waterfront. This process has led to near 2 km waterfront constituted by a succession of disconnected spaces, some of them with seasonal uses and not linked to the port activity, which result in a fragmented front with clearly room for improvement.

In 2006 the Regional Administration began, in coordination with the Municipality, to study the rearrangement of the uses on the waterfront. The study considered traffic and port accessibility needs, the relocation of some concessions near its completion and of the Port Authority offices, the possibility of increasing and connecting the public spaces facilitating the connection between the city and the docks, and finally the setting up of administrative and service uses that guarantee the use of space throughout the day.

The result is a urban project, with some phases already executed, which is developed through projects and special plans [5].

Northern area of the Port of Torrevieja: current situation and proposal for intervention. (Source: Generalitat Valenciana) 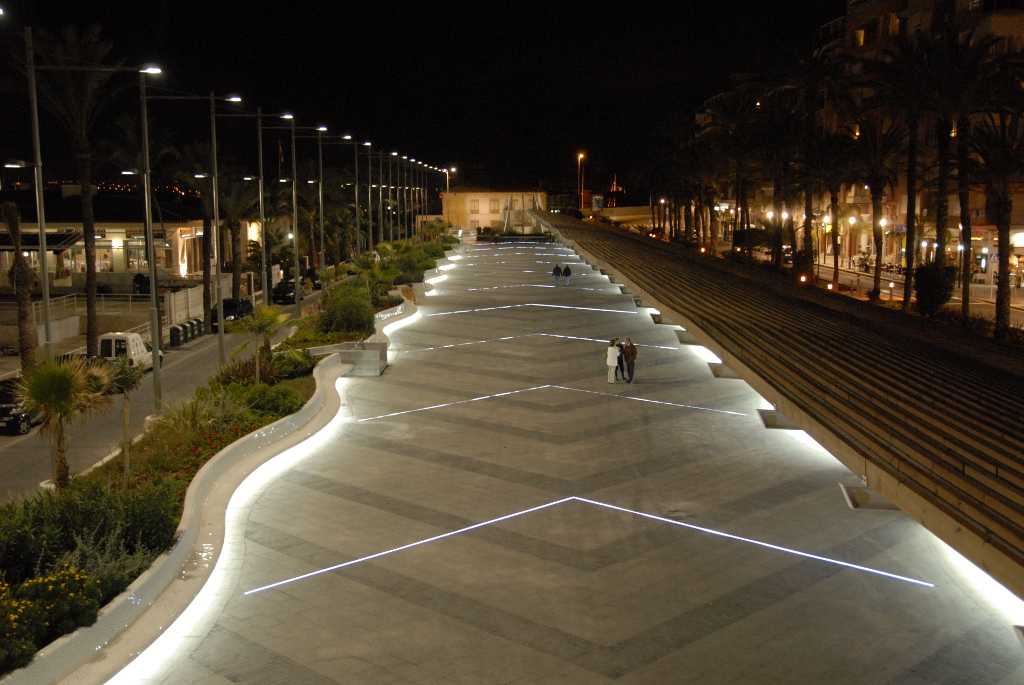 Dénia is a town of about 45,000 inhabitants, which also has a tourist character and has experienced significant demographic growth recently [6]. It is a port city since its origin. The port, whose current configuration dates from the early twentieth century, kept a significant international commercial traffic linked to the export of grapes and other agricultural products, and an outstanding fishing activity. Currently the port has Ro-pax lines with the Balearic Islands and an important nautical supply, a part of some ship repair yards. As in the previous case the port is used by the local community for the celebration of certain cultural and traditional events.

The recent planning process in the port of Denia started in 2007 with the approval of the Plan of Port Uses [7]. This instrument planned to move the maritime station and the activities related to ship repair to other port areas most suitable for such uses.

With the road accesses to the port reflected in the urban plan, the Regional Administration conducted feasibility studies to reduce car traffic on the waterfront and establish a plan responding to the need for transformation and improvement of this area, providing new service and cultural uses in accordance with the Municipality. The relocation of the uses mentioned above has taken place, while part of the financial returns of the new concessions have been invested in projects to rearrange the waterfront in accordance with the new provisions of the Plan.

Port waterfront of Dénia: current situation and proposal for intervention. (Sources: Ministry of Agriculture, Food and Environment and Generalitat Valenciana)

Santa Pola is a town of 35,000 inhabitants located in the south of the Comunitat Valenciana and closely linked to Elche [8] since its origin. It has a significant supply of second homes for vacation.

Its port, with a strong traditional fishing activity, keeps some commercial traffic in addition to leisure boating, shipbuilding and repair, and passengers traffic lines that connect with the nearby island of Tabarca.

In 2008 the Regional Administration drafted a project to rearrange the seafront of the town including the port waterfront. With a large vacant area in the front as a result of the rearrangement of port uses, several agents from the port community posed unconnected initiatives. It was therefore necessary to establish a framework for its development from a global conception that allowed driving the actions rationally through a solution that enhanced the benefits for all the stakeholders, including the local population.

This approach has allowed reinvesting the financial returns of concessions in projects that contribute to materialize the ideas raised in the proposed project for port redevelopment.

Vinaròs is the northernmost coastal town of the Comunitat Valenciana. It has about 29,000 inhabitants. Its tourist supply is related to the vacation period and as in the previous cases, the city center near the port, has cultural heritage elements of certain interest.

Despite its commercial origins, the port currently retains a substantial fishing activity, some activity related to ship repair and certain presence of recreational boating, linked to local community.

For years now, the Municipality promotes actions to improve its urban waterfront through several projects. In 2006 the Regional Administration passed a Plan of Port Uses that foresaw the reallocation of the ship repair activity, which was removed from its location in the waterfront to a more suitable area in the southern dock. This reallocation, along with the rearrangement of the nautical facilities use has allowed to free the inner dock and enabled the transformation of the port waterfront keeping the fishing uses in it. For this purpose a special plan has been drafted, proposing a new plan in both port and municipal land, which will allow to open the port to the public while maintaining its activity.

There are enough technical resources and instruments to facilitate the opening of port waterfronts, while maintaining the port activity. This is necessary, not only to meet a social demand claiming for better urban spaces, but to make a better and more efficient use of them overcoming sectoral visions. However, in Spain, there are still significant inertias that hamper the progress towards this direction, although more and more often we attend urban transformations showing that it is possible. In the will of decision-makers is the key to speed up as far as possible this inevitable change.

[2] On Regional Administration’s initiative when it is necessary to carry out a structural rearrangement of the port.

[5] It is expected that during the first half of 2015, will take place the public consultation “Plan Especial de la Zona Norte” (Special Plan for the Northern ).

[7] Equivalent instrument to the current DEUP.

While adequate channels for dialogue at institutional level are required to address the problems caused by the coexistence of ports and cities, professional practice of planning decision- makers (in ports and municipalities) is of decisive importance. In this sense, overcoming sectoral approaches for best urban solutions, not only for port waterfronts, still has a long way to go in Spain. On that basis, the paper presents some other ideas around port development experiences in Valencian medium-sized cities, presented during the session on contribution of medium-sized ports to urban development that took place on October 2014 during RETE’s autumn meeting, held in Mahon.