In the context of sustainable development of cities, as recognized by the Urban Agenda (European Commission, 2019), circular economy processes play an essential role in determining new forms of business and governance that influence the consumption and management of urban resources (Ellen MacArthur Foundation, 2019).

The Circular City Model (ENEL, 2019) provides the theoretical framework for evaluating sustainable urban and territorial development and developing regenerative strategies. In this perspective, it is possible to identify a specific enabling context in the city-port system (Bonato and Orsini, 2018; Cerreta et al., 2020; Hein and Schubert, 2021; Williams, 2021), in which to regenerate both the port areas and the surrounding urban territories.

In the past, port areas, strongly influenced by urban dynamics, have been an economic and social engine of city development, generating new transformations and multidimensional impacts both locally and regionally (Clemente et al., 2011; Fusco Girard, 2012).

In the second half of the twentieth century, the development of maritime transport technologies and infrastructures led to a social and spatial remodelling of the territorial system, separating port functions from urban ones and weakening relations between the maritime community and the urban community. In response to the growing need for autonomy and spaces for expansion (Ducruet, 2011), the leading European ports have witnessed the decentralization and relocation of activities no longer compatible with the pre-existing urban settlement.

In Italy, on the other hand, the reorganization of the same activities has emphasized the misalignment of the port city, that is, the conflict given by the benefits that flow to other regions and by the localized negative impacts. Commercial ports, as nodes of the logistic system to support international trade, if on the one hand, they play a decisive role in the economic development of the territory and the nation (Ministry of Infrastructure and Transport, 2013), on the other, they determine environmental impacts, social and economic significance on an urban scale (Cerreta and De Toro, 2012; Fonti, 2010), influencing the conditions of well-being and quality of life. In this perspective, the Circular City Model (ENEL, 2019) approach was taken as a theoretical and methodological framework to reformulate the city-port development processes following the principles of the circular economy (European Commission, 2019).

The contribution aims to implement the European recommendations of the Sustainable Development Goals (United Nations, 2015) and the Maritime Spatial Planning 2014/89 (European Commission, 2014), applying a multidimensional decision support system within the theoretical and methodological framework provided by the Circular City Model (CCM) approach, to overcome the conflicts that characterize port cities and identify systemic regeneration opportunities.

The framework was developed and tested as part of the laboratory activity of the Second Level Master in “Sustainable Planning and Design of Port Areas”, active at the Department of Architecture of the University of Naples Federico II, to support the Central Tyrrhenian Sea Port System Authority and the Municipality of Naples in identifying alternative strategies for the regeneration of the East Naples port area.

Within the theoretical and methodological framework of the Circular City Model, this contribution aims to define and subsequently test a multidisciplinary and integrated methodology for the construction of a spatial transformation strategy capable of supporting the circular development of port cities.

The following drivers were considered to structure the decision-making process and elaborate the development scenarios:

The proposed methodological framework makes an adaptive approach operational that makes use of the integration of different evaluation methods (Cerreta et al., 2019) and the construction of soft and hard knowledge domains, which have been interpreted, expressed and evaluated through a set of sustainability indicators linked to the Sustainable Development Goals (SDGs) (United Nations, 2015; AIVP, 2020).

The study area develops in the eastern part of the city-port of Naples, close to the coastline, and includes both the commercial port and the urban settlement of the San Giovanni a Teduccio district. Bounded to the north, west and east by the urban fabric (respectively industrial area, Naples central station and Vesuvian municipalities), the area, originally agricultural characterization, following the construction of the Naples-Portici passenger railway (1839), began a growing process of urbanization, which reached its maximum economic and real estate development in the industrial era. As a result of economic and social exchanges, it quickly became a development engine for the entire urban settlement. Subsequently, the sharp decline in the demand for industrial activities recorded during the deindustrialization process led to the spread of abandoned industrial buildings and abandoned areas, making the coast increasingly inaccessible and contributing to increasing economic and social criticalities. In order to define a sustainable development strategy for the city-port system of East Naples, the plan forecasts provided by the regulatory instruments in force were analyzed, together with some good practices of city-port regeneration. In particular, the project for the tourist port drawn up by the Municipality of Naples in 1995, the masterplan for the commercial port development identified by the Central Tyrrhenian Port System Authority in 2018, and the location of the freight railway proposed by the company were taken into account. national railway Rete Ferroviaria Italiana (RFI).

Starting from the combined analysis of regulatory tools and best practices, interdisciplinary knowledge, consultation with stakeholders from both the maritime cluster and the urban community, the methodological process was structured and developed by the students of the 2018 Master’s edition in the following four phases (Cerreta et al., 2018):

a) definition of knowledge and skills: the objective of this phase was to build an interdisciplinary knowledge base that intersects various complex issues (logistical flows, areas of conflict, divergent interests, etc.) related to the city-port system and, in particular, the definition of a layout of the port through the hypothesis of functions and services compatible with the urban dimension;

b) organization of knowledge: the survey of economic, cultural, social and environmental dynamics was a prerequisite for structuring the decision-making problem. In this phase, the main question to which an answer was sought concerned the types of information, data and indicators necessary for the construction of the cognitive framework and the preparation of the subsequent phase of identifying the stakeholders and the activation of the comparison to make explicit the different points of view and interests. The combination of institutional data with those collected on the territory has configured two macro-types of information about the hard and soft spheres of knowledge, in which local communities play an essential role in defining critical issues, needs and requirements;

c) institutional analysis and comparison with stakeholders: the objective of this phase was the identification and categorization of the significant stakeholders interested in the development of the city-port system, useful for understanding the characteristics of the institutional context, identifying the components of the decision-making process and explain the relative complexities. A discussion was opened through seminars and work tables that led to a progressive shared vision, which allowed to direct the choice towards a balanced development perspective, able to reduce trade-offs and, at the same time, to respond to various instances effectively and adequately;

d) formulation of design alternatives and evaluation of scenarios: the structuring of the problem has allowed the definition of three alternative project scenarios, each of which proposes, in addition to a different spatial configuration of the city-port, a different development forecast for the port of Naples and the district of San Giovanni a Teduccio.

The three proposed scenarios identify respectively a port with a “tourist” destination, one with a predominantly “commercial” character and a “hybrid port”, intended as a synthesis of the port-city system in its cultural, recreational, commercial and logistic functions (following images). By considering the complexities and conflicting needs and points of view, the alternative scenarios were modelled as possible spatial configurations for the circular development of the city-port of Naples. 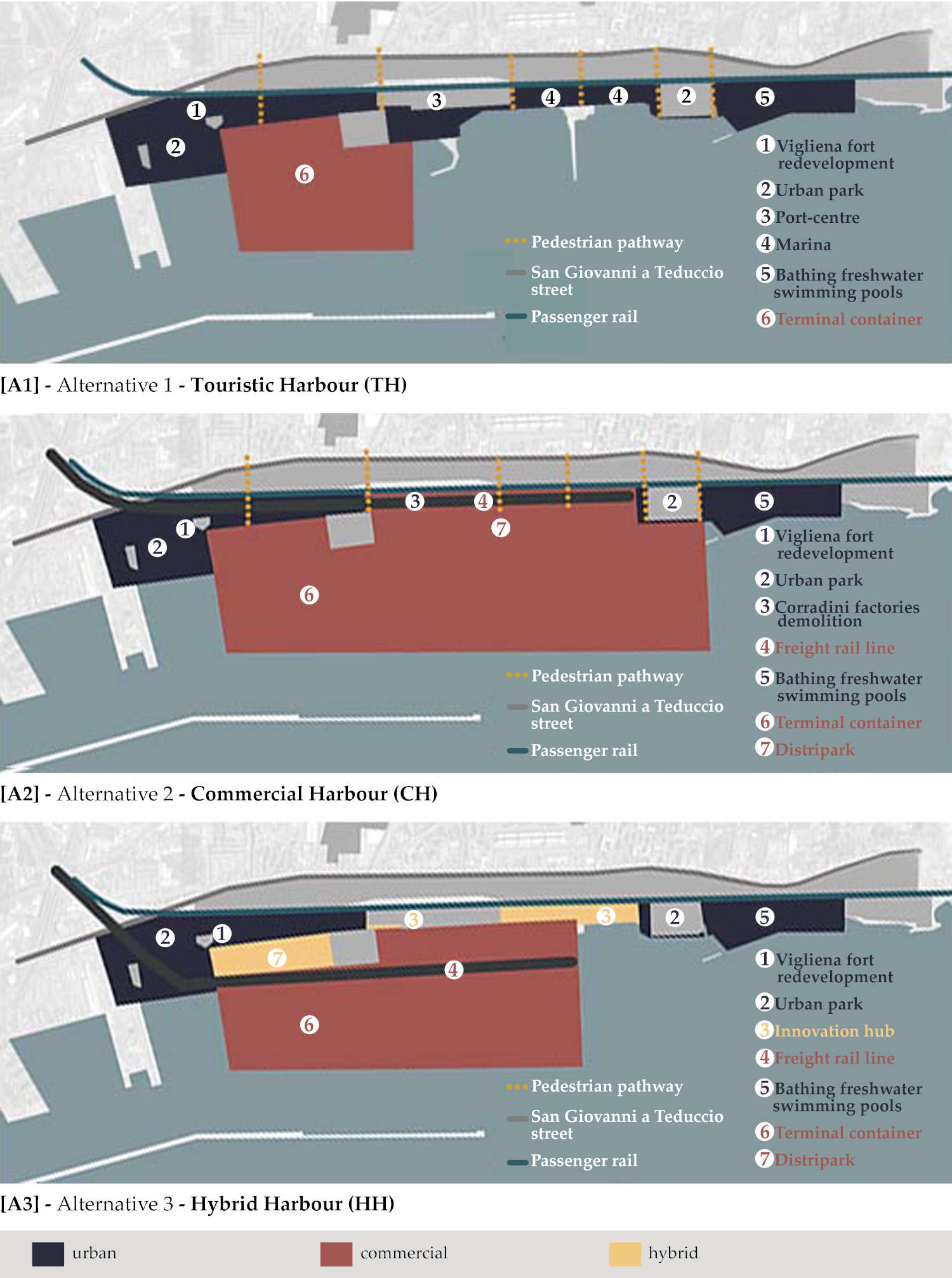 The alternative scenarios for the city-port of East Naples. 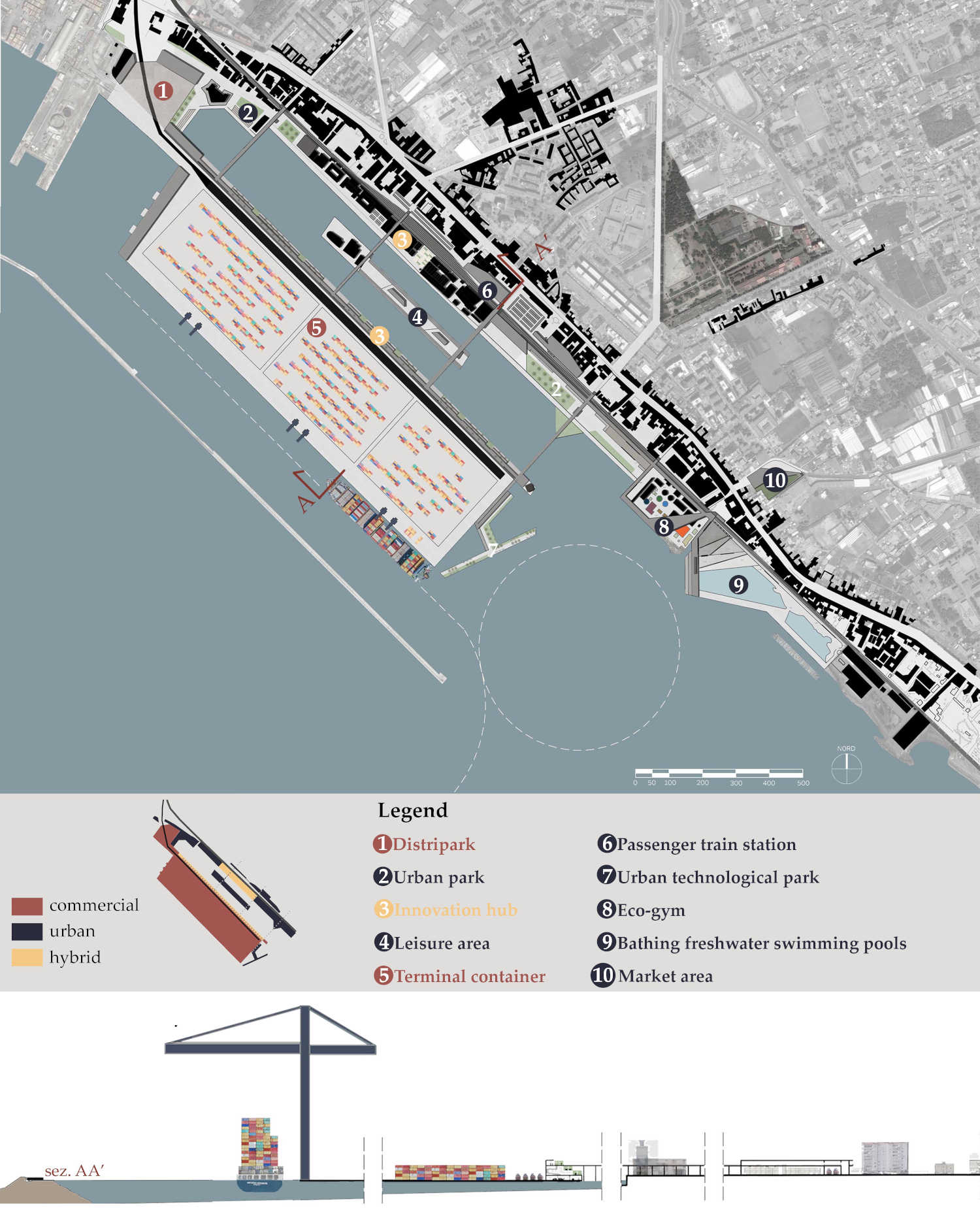 The proposal of the Second Level Master in “Sustainable Planning and Design of Port Areas”.

The proposed methodological approach recognizes as an essential prerequisite the involvement of different stakeholders and different skills, willingness to collaborate in a common and shared strategy for developing the city-port system of East Naples. Furthermore, the integration of hard and soft knowledge has careful collection and selection of data is required, helpful in structuring appropriate indicators, and activating in-depth interaction with the various stakeholders to consider and include specific points of view clearly and transparently. The decision-making process, taking into account the results of the different phases and the interdisciplinary nature of the skills put in place, was developed according to an adaptive approach, using the various tools in the various steps of the decision-making process to reformulate the path and identify the next step. Therefore, one of the most critical aspects of the replicability of the decision-making process lies in the ability to manage the different phases and to be able to obtain information from each of them useful for making the next step operational.

The structured decision-making process has allowed us to test how an adaptive approach can extend the framework of knowledge at the basis of planning and political decisions to obtain results that are attentive to the specifics of the context and the different types of conflicts, promoting a broad and conscious civic and technical commitment, which can support the legitimacy and transparency of political choices.

The methodological proposal made it possible to support the decision-making process that the Port System Authority of the Central Tyrrhenian Sea and the municipality of Naples are facing, helping to build a shared decision-making context and opening a technical-social reflection on one of the most relevant regeneration challenges of the city-port.

The author would like to the thank all the team of the Second Level Master in “Sustainable Planning and Design of Port Areas” of the Department of Architecture, University of Naples Federico II, and in particular the students Silvia Sivo, Gennaro Salzano, Teresa Scandale, Stefania Regalbuto, Irina Di Ruocco, Vincenzo Lobasso, Salvatore Polverino, and the tutors Eleonora Giovene di Girasole and Giuliano Poli.

Ducruet, C. (2011), “The port city in multidisciplinary analysis” in The Port City in the XXIst Century: New Challenges in the Relationship between Port and City; Alemany, J., Bruttomesso, R., Eds., RETE, Venezia, pp. 32–48.

The city-port system identifies a relevant decision-context for the economic development of territories and nations, changing the conditions of well-being and quality of life of cities. The Circular City Model (CCM) approach can support the decision-making process, preserving and enhancing seas and marine resources in a sustainable way and improving the interaction with urban and spatial resources and the maritime and territorial system. This paper presents an adaptive decision-making process for Naples (Italy) commercial port’s development strategies to re-establish a sustainable city-port relationship and make Circular Economic (CE) principles operative. The approach aims to implement a CCM by operationalizing European recommendations of the Sustainable Development Goals (SDGs) framework. The methodological process has been elaborated by the team of the Second Level Master in Sustainable Planning and Design of Port Areas of the University of Naples Federico II.